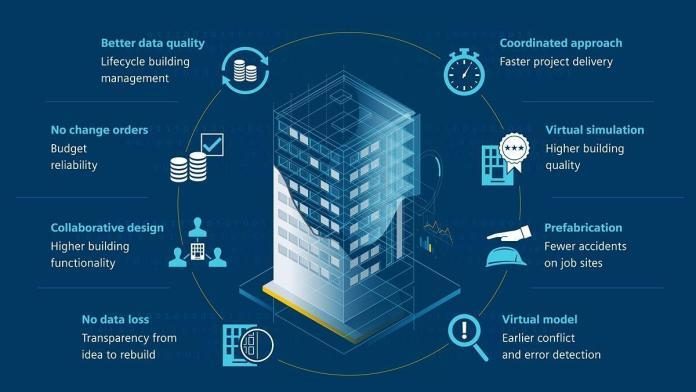 In the design process, BSS are improtant components which have great impacts on architectural and structural designs. It is generally accepted that integrating the service systems and their components into the architectural and structural designs, and coordinating between these systems help avoid major obstacles during the construction process. In some buildings in Nigeria, it is common to see incoherent arrangement of plumbing systems, chiselling/breaking down of structural members to accommodate mechanical systems and other construction setbacks due to uncoordinated MEP design at an early stage.

Usually, after completing the designs, the MEP coordination process begins by holding meetings between the representatives of the general contractor and specialty trades. The MEP systems coordination influences the productivity of all designers of multidisciplinary backgrounds involved in the design process. Any errors or mistakes during designing or constructing the project in the MEP systems would lead to time consuming tasks, budget waste, labour time increment, and project time extension.

In a research carried out by authors from Applied Science University, and University of Bahrain and published in Journal of Information Technology in Construction, the need to integrated BSS early into preliminary designs (architectural and structural) were reviewed and studied. According to the authors,

The coordination processes of overlaying two-dimensional drawings of different service systems, each of which is designed by different specialised designers has been identified by the authors as a major cause of clashes and conflicts. The accuracy of this process depends on the experiences of architects and structural engineers in order to avoid the possible conflicts and to include the systems’ components and spatial requirements into the design and its spaces.

Actually, errors may not be fully detected by these traditional processes till the construction stages. Identifying conflicts in the 2D-drawings of service systems is a challenging process, since it depends on designers’ experience. These possible errors or conflicts can negatively affect the projects in many aspects, particularly in the case of being undetected after the construction completion. This can consequentially impact the project’s spaces to accommodate the systems’ components and requirements.

3D to the rescue

Although 2D drawings are still extensively used in every aspect of a building project, there is a strong movement led by the architects to transform to 3D models.

Using 3D digital modelling in the processes of design and coordination not only improves the designers’ raw imagination by representing a 3D model including the components of the service systems, but also eliminates the errors generated from the lack of designers’ experiences by visually presenting all systems’ components. Employing digital modelling eases the processes of coordination and design, and makes them more accurate. Authorities, stakeholders and decision makers will gain many advantages, such as: creating a detailed model of both the design and the service systems which makes their decisions more reliable and accurate.

Building Information Modelling (BIM) is an approach and a process in which the design model potentially includes various building information of different components and spaces, in order for the users to visualise, manage, analyse and/or design in a better way. BIM approach offers an effective assistance represented in making a multidisciplinary model that has BSS in one detailed model, which helps discover and solve any obstacles of overlaps or/and conflicts. Unlike other digital tools that help the imagination capabilities of architects or architecture students, BIM proceeds beyond to unveil and expose possible problems that may appear in the later processes of designing and construction.

Citing previous research works, the authors concluded clash detection has been favoured over the clash avoidance due to cultural practices and lack of technologies to support clash avoidance. From empirical evidence of past research works, MEP-related clashes has been strongly linked to the cultural practices of isolated working among designers, and lack of specialised professional training among designers.

The paper based on the qualitative analysis of both the real projects of construction industry and the student projects of academia, concludes that integrating the MEP systems into the conceptual design phases eliminates the clashes and conflicts that may occur in later stages, and concurrently the possibility of not detecting these conflicts till the construction process.

Disclaimer
The findings of this research has been published on www.structville.com because it is an open access article distributed under the terms of the Creative Commons Attribution 4.0 International (https://creativecommons.org/licenses/by/4.0/), which permits unrestricted use, distribution, and reproduction in any medium, provided the original work is properly cited.

The Cost of Fencing One Plot of Land in Nigeria