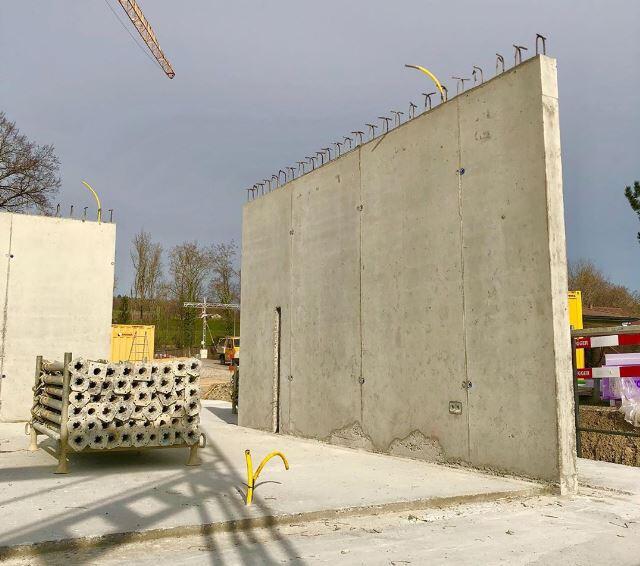 If movement (expansion and/or contraction) is restricted within a young concrete element, tensile stresses will develop which will lead to cracking. This restriction to movement is normally referred to as restraint. Restraints may be internal or external to the element. Internal restraint occurs due to differential temperature changes within a mass concrete element and can cause surface and/or internal cracking.  However, it is only significant in very thick sections (1000 mm or more). Internal restraints are not considered in this article.

End restraints occurs when the edges of a young concrete are prevented from movement (see Figure below). This typically occurs in suspended slab cast between rigid cores, walls or columns, in infill bays, ground slab cast on piles, large area ground slabs restrained locally, e.g. by piles, columns or column foundations or by a build up of friction, walls cast against secant, contiguous concrete or steel sheet piled walls etc (CIRIA C660).

This typically occurs where the young concrete section (say a wall) is cast on a hardened concrete base (see Figure below). This means that restriction is only in one direction, and there is interaction between the old and new concrete in terms of distribution of cracks. Edge restraint is different from end restraint because the crack width is a function of restrained strain rather than the tensile capacity of the concrete.

In some cases also, there can be combination of end restraint and edge restraint.

The level of restraint in a young concrete imposed by adjoining element is commonly described using restraint factors. The degree of restraint, R, is generally defined as the ratio between the actual stress in a contracting body and the stress imposed under full restraint.

ACI (1990) (cited by CIRIA C660) developed method for estimating edge restraint based on the relative geometry and stiffness of the old and new concrete. The equation is given by;

However, CIRIA C660 identified that the relative areas of influence of Ao and An may be difficult to define. Therefore the following simple rules were recommended;

Based on CIRIA C660, the values in Table 1 can be used for edge restraint based on An/Ao or An/2Ao ratio.

Table 1: Values of Edge Restraint Factors (According to CIRIA C660)

The values of restraint factors for different conditions as given by different codes is summarised in the Table 2.

Thank you very much for reading.

Get this publication below for a cheap price by clicking on the image. It goes a long way in supporting what we do here at Structville. To read about the publication, click HERE. Thank you for your kind consideration.