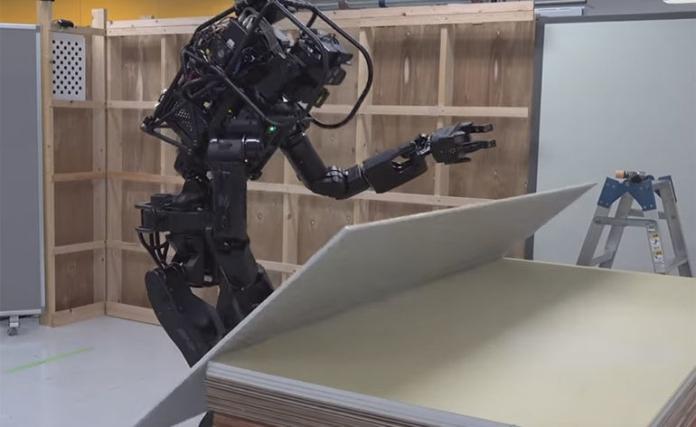 The construction industry remains one of the least automated industries which depend on manual human labour for maximum productivity. The role of robots in construction operations is still very insignificant when compared other industries. However, robotic automation stands as a promising field for construction, as it offers a safer and efficient approach for handling building resources on site which extends the limits for more creative and customizable architecture.

Due to the complex and highly dynamic nature of the construction industry, robots cannot blindly execute predefined instructions as obtainable in other more deterministic industries. This makes it difficult for robots to adapt to the ever changing construction sites. It has therefore been found important that robots be equipped with advanced vision capabilities to enable them observe, cope, and adapt to busy construction sites.

Researchers from Barlett School of Architecture, UCL, London UK, investigated a flexible 3D object recognition approach to easily reference building components to a vision system and be able to deal with objects’ imprecision. This is due to the fact that dealing with unique, irregular structures require robust object estimation approaches to enable on-site autonomous robotic assembly applications. To achieve this, they used a virtual scanning process which takes the “ideal” representation model of all the objects found in the Building Information Modelling (BIM) model as the guide for finding all “best match objects” on site, without the need for physically scanning or labelling the objects to reference them. The study was published in Springer – Construction Robotics.

According to the authors,

Our overarching hypothesis is that using the available BIM data as the reference model will have the potential not only to locate highly matched known objects with a threshold to accommodate material deviations, but also flexibility to find the best match objects from an unknown pile… Our goal was to detect and manipulate the best-matched known objects in an unsorted pile on site according to a given design in the form of the BIM model. Therefore, we developed a holistic approach that includes our detection method, and an automated process to grasp, manipulate, and determine the assembly sequence based on the design scheme of the structure and awareness of the surrounding context.

In their methodology, 3D object recognition was adopted using global feature based approach due to its flexibility to work with noisy data. 3D CAD representation of the objects coming from the BIM model was used for training instead of using physical scan models of the objects. After the recognition stage, object to robot calibration was done.

The recognition system proposed in the study showed that the method of using the virtual representation coming from the BIM model instead of having to scan the actual model brings advantages regarding flexible setup and affordable recognition. The experiments also showed that the system able to detect and construct several structures with inherited imperfections within acceptable tolerances. However, it also showed several limitations related to the object’s geometrical characteristic and its implication on the successful detection of the whole process success.

Disclaimer:
The findings of this research work has been shown on www.structville.com because it is an open access article which is distributed under the terms of the Creative Commons Attribution 4.0 International License (http://creativecommons.org/licenses/by/4.0/), which permits unrestricted use,distribution, and reproduction in any medium, provided you give appropriate credit to the original author(s) and the source, provide a link to the Creative Commons license, and indicate if changes were made.