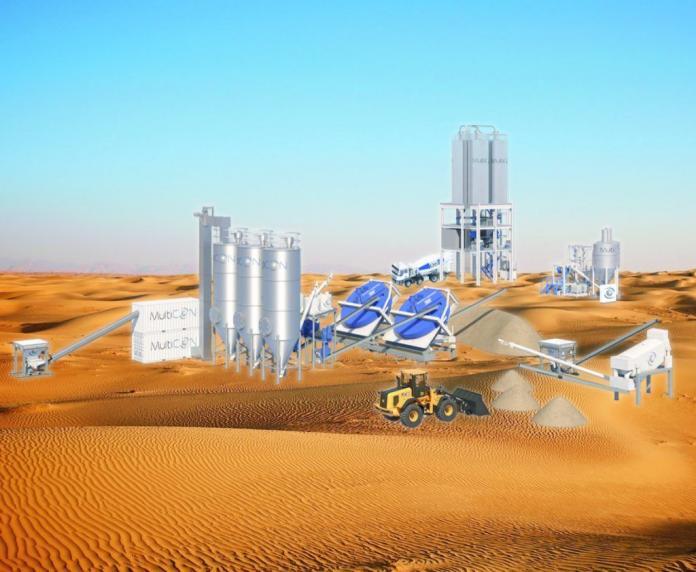 There has always been some issues with the use of desert sand as a construction material due to the fact that it is too rounded and uniformly graded to be suitable for construction purposes. Concrete produced from desert sand can exhibit lower strength, poor cohesion, poor slump, and poor workability when compared with River Sand. However, researchers from the College of Civil and Hydraulic Engineering, Ningxia University, China have evaluated the behaviour of concrete produced with desert sand when subjected to high temperature. The study was published in Springer – International Journal of Concrete Structures and Materials.

There have been speculations and researches on the application of desert sand in the production of ‘low carbon concrete‘, but the researchers from Ningxia suggests that desert sand has been successfully used for construction in China, citing some publications.

At higher temperature, the properties of concrete are usually altered. Therefore, the knowledge of the mechanical properties and behaviour of concrete at elevated temperature is important due to fire events that can occur in buildings. In previous research works, the compressive strength of ordinary and high-performance concrete have been observed to generally declined with temperature. However, the strength reduction of ordinary concrete was higher than that of high-performance concrete.

To carry out the experiment, the researchers used desert sand from Mu Us Sandy land in Yanchi Country as the fine aggregate, grade 42.5R cement, and 10-20 mm diamater crushed rock coarse aggregate.. They went ahead to study the effects of desert sand replacement rate (DSRR), temperature, and cooling regime on the elasticity modulus under static compression, cubic compressive strength and prismatic compressive strength of concrete. The influence of temperature on the microstructure of concrete produced with desert sand was also analyzed using X-ray diffraction (XRD) and Scanning Electron Microscope (SEM). After curing the samples for 28 days, CSL-26-17 heating furnace with a ultimate temperature of 1600 °C was used to carry out elevated temperature test. Target temperatures were 100 °C, 300 °C, 500 °C and 700 °C.

From microscopic observations, concrete produced with desert sand at room temperature was structurally-complete and had good compactness. The interface between coarse aggregate and cement mortar became more distinct after 300 °C. After 500 °C, the dimension of intact layered CH decreased and Many small pores were produced. After 700 °C, cement matrix became more shriveled and white large crystals CH were scarce.

Disclaimer
The contents of this research work has been presented on www.strutctville.com because it is licensed under a Creative Commons Attribution 4.0 International License, which permits use, sharing, adaptation, distribution and reproduction in any medium or format, as long as you give appropriate credit to the original author(s) and the source, provide a link to the Creative Commons licence, and indicate if changes were made. The images or other third party material in this article are included in the article’s Creative Commons licence, unless indicated otherwise in a credit line to the material. To view a copy of this licence, visit http://creativecommons.org/licenses/by/4.0

The Cost of Plastering a House in Nigeria