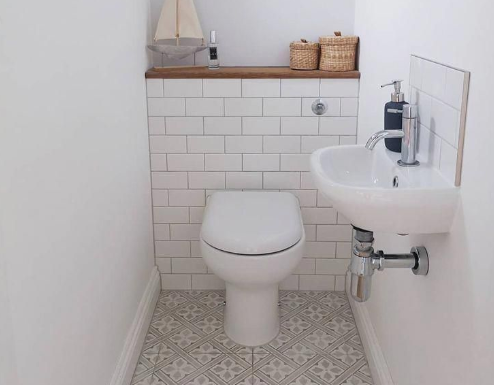 For a building to be useful, the structural integrity and building services such as plumbing, electrical fittings, HVAC, etc must be functional and efficient. Unfortunately, it is common to see MEP services and pipes clash with structural members such as beams and columns in buildings. However, this can be prevented or handled in the design stage through the use of Building Information Modelling (BIM). One of the commonest solutions to avoid the clash of columns and water closet (WC) waste pipes is through the use of vanity walls behind the WC.

Read Also…
3D Building Services Systems Integration in Design of Buildings
Building Collapse – Have you exhausted your factors of safety?

Traditionally, vanities are fittings that are provided in rooms or water closets to aid storage, provide counter top and improve aesthetics. They can be wall mounted or supported on the floor, but they are typically placed next to the wall of a building, hence the name vanity walls.

In our own context, the aim of the vanity is to conceal the waste pipe of the WC, and to also avoid clashing of the waste pipe with the columns of the building. This is usually dependent on how the architect positioned the WC. Some contractors observe the very bad practice of chiseling structural members to allow pipes and services pass through. This is completely unacceptable and should be discouraged.

Some modern designs of WC require vanity walls by default (to accommodate the water cistern), but in some cases vanities can be constructed using properly finished sandcrete walls to provide an alternative route for waste pipes, especially when the position of the WC is not very favourable. To be favourable to plumbers, WC’s are usually positioned to back an external wall. However, when a WC is backing an internal wall, the waste pipe may clash with some sensitive structural members, and vanities may be needed. The height of the vanity can be properly raised to accommodate the flush cistern, and the top can also provide some storage as shown in the image below.

We are going to use an example to show how vanities can be used to avoid waste pipe conflict with columns.

In the floor plan shown above, a WC is provided adjacent to an internal wall, and the location of the duct is as shown in the plan layout. A little observation of the preliminary drawing shows that the route of the discharge pipe (in green lines) is conflicting with the column close to the duct (all columns are highlighted in red). To solve this problem, a vanity wall can be provided adjacent to the main wall as shown below. The new route of the waste pipes as they pass through non-structural members directly to the duct can also be observed in the new layout.

The only disadvantage of this method is that the size of the toilet will be reduced by size of the vanity wall introduced, but it is usually a viable solution.

Building construction requires good technical coordination among all the consultants at the design stage. By so doing, all potential conflicts and difficulties that can be encountered during construction will be minimised.