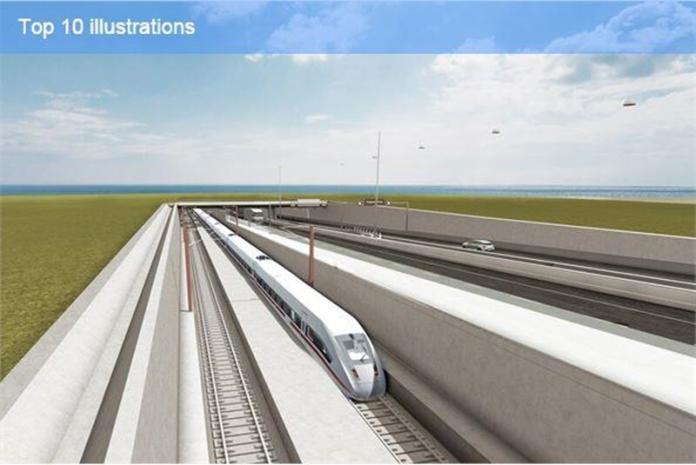 The construction of the world’s longest immersed tunnel has officially begun. The Fehmarnbelt Tunnel that will connect Denmark and Germany, is scheduled to be officially opened by 2029. It’s one of Europe’s largest ongoing infrastructure projects, with a budget of more than US$8 million.

The tunnel will have an 18 kilometers extension and will be built across the Fehmarn Belt, a strait between the German island of Fehmarn and the Danish island of Lolland. It will be an alternative to the current ferry service, which takes 45 minutes. Traveling through the tunnel will take seven minutes by train and ten minutes by car.

It will be the longest combined road and rail tunnel in the world, with two double-lane motorways, separated by a service passageway, and two electrified rail tracks. Besides the benefits to passenger trains and cars, it will have a positive impact on the flow of freight trucks and trains.

According to Femern website, the contract for the construction of the 18km tunnel was signed on 30 May 2016. The contract which is worth almost 4 billion Euro was signed between Femern A/S  (the Danish state-owned company tasked with designing and planning the link) and international contractors responsible for the establishment of the 18 km Fehmarnbelt tunnel between Rødbyhavn and Puttgarden. The contract with the Dutch consortium, Fehmarn Belt Contractors (FBC) came into force in November 2019. This covers dredging and reclamation.

In May 2020, Femern A/S initiated conditional contracts for the tunnel as well as the portals and ramps, which were signed with the consortium, Femern Link Contractors (FLC). The contracts will be activated with effect from 1 January 2021.

Construction work started in the summer on the Danish side. Work will carry on for a few years in Denmark before moving into German territory. Workers are now building a new harbor in Lolland and in 2021 they will start construction of a factory, both meant to support work on the tunnel. Located behind the port, the factory will have six production lines to assemble the 89 massive concrete sections that will make up the tunnel.