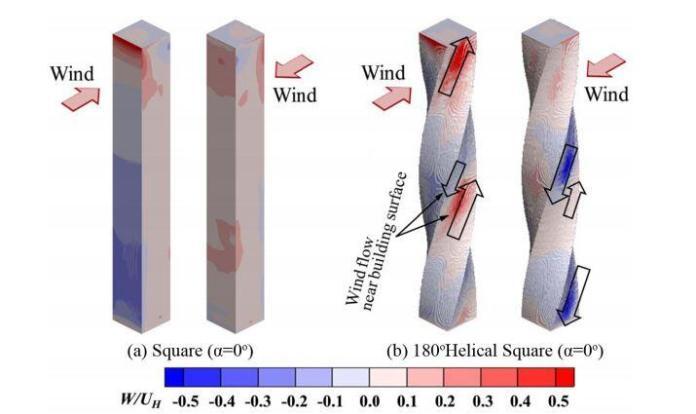 To improve the safety and serviceability of super-tall buildings in strong winds, aerodynamic optimization of building shapes is considered to be the most efficient approach. Aerodynamic optimization is aimed at solving the problem from the source in contrast to structural optimization which is aimed at increasing the structural resistance against winds [1]. Aerodynamics is concerned with the study of air in motion and how it interacts with solid objects around it.

According to Tanaka et al. [2], the free form architecture being expressed in the modern construction of tall buildings today do not only have the advantage of reflecting the architect’s idea, but also have the advantage of reducing the effects of wind on the structure due to aerodynamic effects. Some aerodynamic modifications in architectural design are one of the effective design approaches which can significantly reduce the effect of the lateral wind force and thus, the building motion [3, 4].

The modifications usually employed to improve aerodynamic response of tall buildings are [5];

By changing the flow pattern around the building due to aerodynamic modifications of the building shape, (i.e. an appropriate choice of building form), wind response can be moderated when compared to the original building shape. As far as wind loading and resulting motions are concerned for tall and slender buildings, the shape is critical and a governing factor in the architectural design. Wind tunnel test is the most popular method of evaluating the aerodynamic behaviour of a high-rise building.

Aerodynamic forms in general reduce the along-wind response as well as across-wind vibration of the buildings caused by vortex-shedding by “confusing” the wind (i.e., by interrupting vortex-shedding and the boundary layer around the façade and causing mild turbulence there).

While irregular forms pose challenges to structural engineers for developing the structural framework, they can be advantageous in reducing wind load effects and building responses [7]. Examples employed in contemporary tall buildings are chamfered or rounded corners, streamlined forms, tapered forms, openings through a building, and notches.

The Shanghai World Financial Center and the Kingdom Center in Riyadh (see below) employ a large through-building opening at the top combined with a tapered form. The proposed Guangzhou Pearl River Tower’s funnel form facades catch natural wind not only to reduce the building motion but also to generate energy using wind. Due to the nature of the strategy which manipulates building masses and forms, this approach blends fittingly with architectural aesthetics.