This soak-away was being constructed somewhere in Abuja when some part of the soil caved in, and caused considerable damage to the already laid reinforcement. Fortunately no life was lost, but this led to serious cost consequences and delay in the project completion time.See the soak-away/septic tank before it collapsed at the picture below. 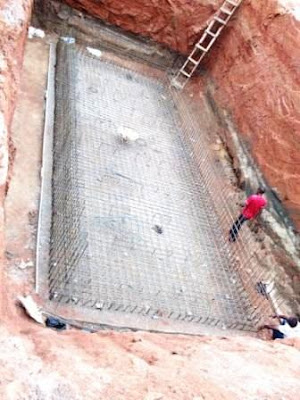 In Nigeria, tropical laterites are predominant and forms the subsoil of most areas. Most laterites are cohesive-frictional soils which means that they possess both angle of internal friction and cohesion. Unlike sands, these soils are self supporting to a certain depth during excavation called the CRITICAL DEPTH, and this is mainly due to their cohesive properties. In cohesive soils, when the critical depth of excavation is reached, the sides of the cut will fail and the soil mass will fall to the bottom. Unlike sands (frictional/granular materials), the steepest slope at which a cohesive soil will stand decreases as the depth of excavation increases.

The pressure diagram for frictional-cohesive soils based on modified Rankine’s theory is as shown below; 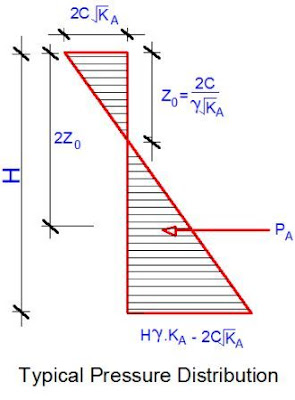 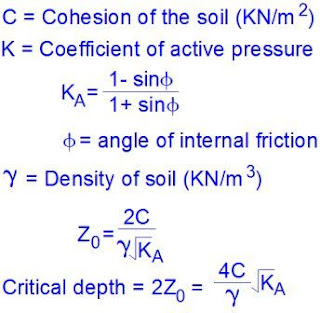 The values of the cohesion and angle of internal friction of a soil sample can be obtained by carrying out very quick unconsolidated undrained triaxial test in the laboratory on an ‘undisturbed’ sample collected from the site of excavation. So you can carry out quick calculation to determine the critical depth using the formular above. Since the net pressure over the critical depth (2Zo) is zero, the cohesive soil should be able to stand unsupported up to this depth.

However to increase the stability of cuts in excavations, you can do the following;
(1) Alter the slope of the cut
(2) Use soil nailing
(3) Brace the excavation
(4) Use tie-back systems

If these considerations were made initially, the construction wold not have suffered such setback.