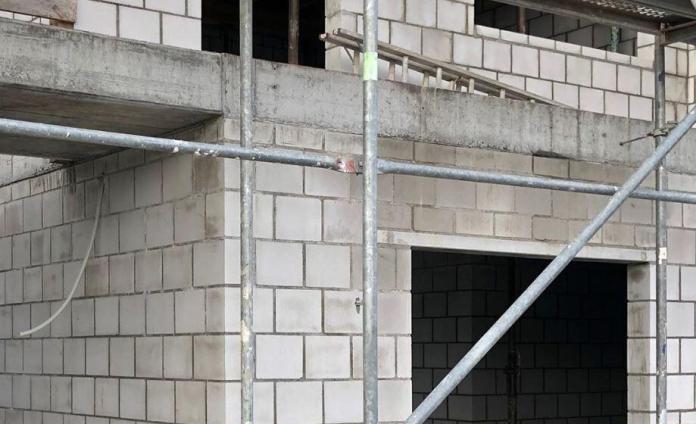 A lintel is a horizontal structural member which spans across the supports of an opening such as a door or window in a building. Depending on the span of the opening, a lintel may be structurally significant or insignificant – considering whether it requires serious structural consideration or not. Lintels can be made of materials such as timber, concrete, or steel. Concrete lintels are usually provided with nominal reinforcement, due to the inherent low tensile strength of concrete. When a lintel is continuous in a building and connects all the structural members together, it is called a chained lintel.

In Nigeria, it is common to see residential buildings chained at the lintel level. What is meant by chaining is that all the structural members are joined monolithically at the lintel level with reinforced concrete. Chained lintels can also be called continuous lintels. This process is usually done when the blockwork is built alongside the columns of the building. It is rarely done in a purely framed building where the columns, beams, and slab are done before the blockwork panels are built.

Eye brows can be raised over this ‘wasteful approach’ of using excessive concrete and reinforcement on elements that are not ‘structurally significant’. This can lead to questions such as;

(1) Is it possible that the amount of money spent on constructing blockwork simultaneously with the frame and adopting a chained lintel offsets the cost of constructing a purely framed building?
(2) Can chained lintels be entirely avoided irrespective of the approach used?
(3) Are there special advantages of doing chained lintel in a building?

This issue is pertinent because the structural frame of a building is usually designed to stand alone without considering the effect of such lintels. Also, such arrangement is not usually captured in the structural drawings of a building, but it is done on site for low scale residential buildings. Why the extra cost? The lintels are usually 230 x 230 mm in dimension.

The perceived advantages of chained lintels are as follows;

Disadvantages of chained lintels
(1) All the advantages highlighted above are usually catered for when designing the building as a pure frame. What is then the need of the extra advantages in terms of cost?
(2) The reinforcements provided in the building are the same as when no consideration for chained lintels is made.
(3) The construction speed is reduced.

(N/B): All loads were assumed.

The results below show the building model with lintels and the internal forces acting on the building.

Under the effect of gravity actions, the following results were observed in the structural members;

(1) Beams
In the building with chained lintel, the bending moment on the intermediate support of the external beam reduced by about 6.8%. However, the end support moment increased by about 43.8% (from 7.47 kNm to 13.3 kNm). A reduction in span moment was also observed for floor beams in buildings with chained lintel. This same behaviour was observed in the internals beams.

(2) Columns
The bending moment in the corner columns increased from 5.69 kNm to 12.338 kNm when chained lintels were introduced. This is due to the fact that lintels are subjected to the load from the blockwork courses that get to the sofit of the beams. Axial load in the columns also increased from 101 kN to 143 kN. This same increase in internal forces was observed for the intermediate columns.

Therefore, introducing chained lintels appears to worsen action effects on the columns, but favours the floor beams, except for end support moments.

Limitation of the study: The loadings on the lintels appeared to be exaggerated, and some considerations were not made to reduce the wall load on the floor beams since the chained lintel will carry some of the loads. The author therefore welcomes discussions and further investigations in the study.

Thank you for reading.

The Problems of Using Timber in Building Construction