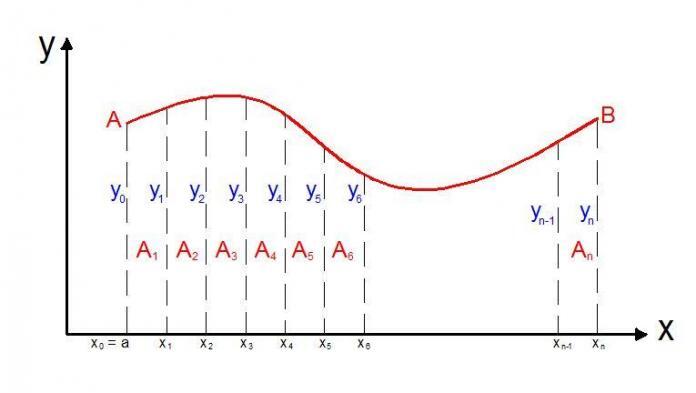 Generally, integration is the process of summing up slices or parts in order to find the whole. If dx represents a small displacement or change along the direction x, the process of integration will give a function g(x), the derivative of which △g(x) is equal to the function f(x). This is indicated by the integral sign ∫. Thus, ∫f(x)dx is the summation of the product of f(x) and dx. Numerical integration is a computational (approximate) approach of evaluating definite integrals.

A definite integral is defined by limits (say a and b) and it is given by;

To obtain the numerical solution of functions using the numerical quadrature, the first step is usually to select a distinct set of equally spaced nodes {x0, x1, …., xn} from the interval [a,b]. The smaller the spacing of the nodes or intervals, the more accurate the solution.

Let us assume that Pn is the lagrange interpolating polynomial then we can write;

If we integrate Pn excluding its truncation error term over [a ,b], we obtain;

There are many methods of approximating the numerical quadrature for numerical integration but we are going to consider the most popular ones which are;

The Trapezoidal Rule for Numerical Integration

The Trapezoidal rule for numerical integration is obtained from considering the integration formula produced by using first Lagrange polynomials with equally spaced intervals. To evaluate ∫f(x)dx within the limits [a, b], let x0 = a and x1 = b. Then h = b – a = x1 – x0

The equation above eventually yields;

Equation (2.3) is known as the Trapezoidal rule.

Under the condition that warrants the use of composite trapezoidal rule, we can establish the general formula using the figure below;

The generalised Trapezoidal Rule can therefore be expressed as;

The Simpson’s Rule for Numerical Integration

If we consider the integration formula derived by using the second Lagrange polynomials with equally spaced intervals. If the function f(x) is replaced by an arc of a parabola, and the origin temporarily shifted to a point x = x0 by putting x = X + x0 . We may therefore write the equation of the parabola A0A1A2 as y = y0 + bX + cX2.

The area of the two adjacent strips under A0A1A2 is approximately;

Similar to Trapezoidal rule, the accuracy of Simpson’s rule can be improved by dividing the interval [a, b] into a larger (even) number of strips of smaller width. Let us evoke fig 6.2, and by considering two successive strips at a time, we can write the expression of Simpson’s formula as thus:

In a more compact form;

Evaluate the integral below using 10 intervals;

The Problems of Using Timber in Building Construction

Chained lintels in a building – What are the implications?