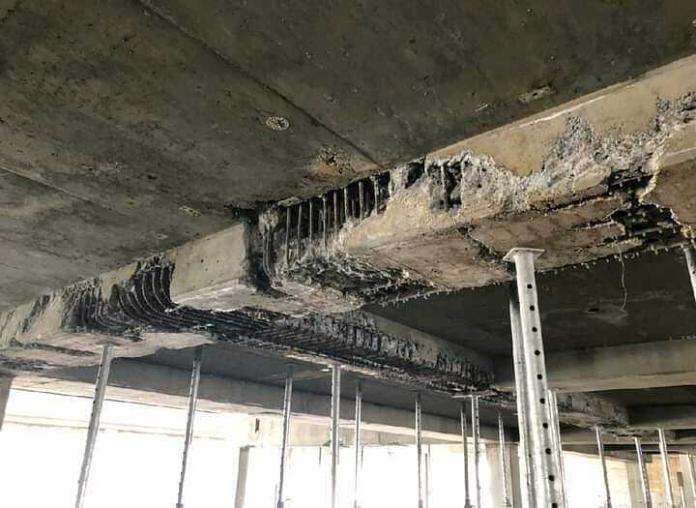 Such demolitions may be in part or in whole. On the other hand, buildings that are built over canals, drainage, high voltage transmission lines, are also usually marked for demolition. Constructing an industrial building in a residential area without approval and vice versa can lead to a demolition order too. They are generally described as illegal structures.

(2) Court/government order
The court or government can give orders for the demolition of a building due to legal reasons or otherwise. For instance, during the 2020 COVID-19 pandemic, a governor in Nigeria ordered and supervised the demolition of a hotel for violating lockdown orders. Sometimes, orders are given for the outright demolition of buildings that are used to perpetrate crimes such as criminal hideouts, kidnapper’s den, etc.

(4) Marked as unsafe
Distressed or old buildings that are deemed to pose a safety risk can be marked for demolition by regulatory agencies.

(5) Encroachment into the right of way of other developments
When structures encroach into the right of way of new major developments such as highways, railways, airports, etc, they can be marked for demolition. However, for buildings that have approval, appropriate compensation is usually provided for the owners of the building. For instance, it has been reported that the proposed Fourth Mainland Bridge in Lagos, Nigeria, will affect about 800 houses.

(6) Property owner’s desire to get rid of a structure
A property owner can decide to demolish an existing structure in order to erect a new one or use the space for another thing.

Generally, the demolition of a reinforced concrete structure can be a very challenging and expensive task, and oftentimes, approval may be needed from the local government before the commencement of the operation. Due to the cost and environmental implications of demolishing a building, it should always be a last resort after all other options have been explored. There are different methods of demolishing a building, but that is outside the scope of this article.

While an imminent demolition of a building is possible due to the six reasons given above, we are going to focus on the number (3), which directly affects structural engineers.

Demolition of a Building for Structural Reasons

During design, the limit state concept is achieved by factoring the loads and materials to be used in the construction. The concept also takes into account all imperfections and geometric tolerances. The generality of the concept is that the effects of the design actions should be less than the resistance of the structure. This defines the accepted limit state.

While this can easily be achieved during design, construction defects can compromise the safety of a well-designed building. Furthermore, when a building is exposed to an earthquake, fire, or accidental impact, some level of damages may be observed that will demand the assessment of the structural integrity of the building. It is also important to evaluate the capacity of an existing building when the occupancy class is to be changed from say residential to a storage house.

During construction, defects can come from poor quality of materials or poor workmanship. Some scary construction defects that require serious attention are:

When a structural defect is observed in construction, something MUST be done to address it, and the onus lies on the structural engineer to provide guidance on what is to be done. This is because the safety of the occupants of the building during and after construction is not negotiable. Nothing should be left to ‘luck’ or ‘guesses’.

Due to the cost and environmental implications, a consultant should order demolition as a last resort unless nothing else can be done. Even when the member sizes and reinforcements provided are inadequate, all options should be explored before a decision is taken.

Some options to be explored are:

(1) Redesign/assessment of the building based on what is existing
When the member sizes and areas of reinforcement provided are not in conformity with the design, the building can be remodelled and redesigned to check the capacity of what is existing. The design parameters such as concrete grade and yield strength should be based on the actual properties of the materials used in the construction. As a result, tests like non-destructive testing of concrete and the reinforcement should be carried out.

The engineer should also inspect the building thoroughly for cracks and evidence of structural distress. This can help him predict what is happening to the building or the nature of stresses causing the distress.

When the assessment is done, the structural engineer will then have a basis for making a decision. If the construction is still ongoing, the load path or the structural scheme can be modified accordingly. The other options listed below can be explored too. The cost of this assessment should be decided between the property owner and the contractor.

(2) Introducing additional supports/members to change the load distribution
Additional supports or members can be introduced into an on-going or existing buildings in order to alter the load/stress distribution in the structure. This should be an informed decision from the structural engineer after understanding the current state of the building, or the effects of the existing structural arrangement.

(3) Introducing steel members and polymer composites
Where possible, structural steel members such as stanchions, universal beams, flats, plates, or angles can be introduced to provide external support to failing structural members. This is a form of retrofitting on its own though. According to a 2016 study in Indonesia, steel plates and fasteners can be used as external reinforcements when the rebars in a structure are inadequate. The use of epoxy grouting, steel plates, and bolt fasteners have been observed to increase the flexural capacity of the strengthened members.

Materials like fibre reinforced polymers (FRP) have also found applications in the strengthening of beams and slabs. The usual strengthening method presumes the placing of the sheets bonded on the tensioned side using resins. The sheets are mounted parallel to the long edge of the slabs.

(4) Retrofitting
Retrofitting is basically the process of adding or incorporating new features that were not previously included in an existing design. There are different methods of retrofitting reinforced concrete structures such as concrete jacketing, steel jacketing, use of fibre-reinforced polymer, etc.

One way of retrofitting reinforced concrete beams is by concrete jacketing. In this method, an additional layer of concrete is placed around the existing beam, together with additional longitudinal bars and stirrups, to enhance the flexural and/or shear capacities. Other options of retrofitting beams are the use of fibre-reinforced polymer (FRP) wrapping and the use of steel brackets or haunches.

Concrete jacketing of reinforced concrete columns involves adding concrete with longitudinal and transverse reinforcement around the existing columns. This type of strengthening improves the axial and shear strength of columns while the flexural strength of column and strength of the beam-column joints will likely remain the same.

Concrete jacketing involves drilling holes into the concrete members and producing a very workable but strong concrete mixture. The compatibility of deformation between the existing and new concrete, resistance against delamination, and durability should also be carefully looked into.

It is important to note that there is a price to pay for making these kinds of changes. Apart from the increased cost of construction and safety risks, the architectural concept of the building may also be altered.

If a consultant gets to a site, he can order the demolition of the structural member if the following are observed after thorough tests and investigations. This is a case where the options listed above are not feasible:

Thank you very much for visiting Structville today.