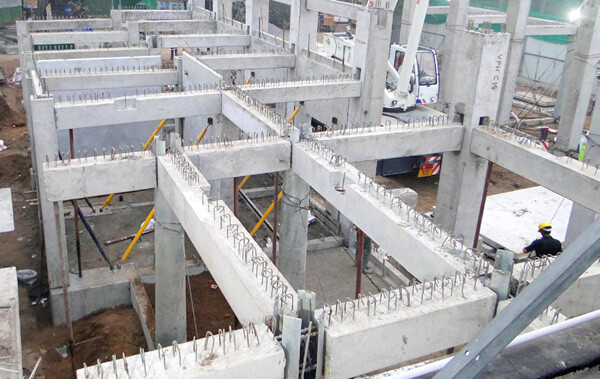 Beams are horizontal structural elements designed to carry lateral loads. When they are inclined or slanted, they are referred to as raker beams. Floor beams in a reinforced concrete building are normally designed to resist load from the floor slab, their own self-weight, the weight of the partitions/cladding, the weight of finishes, and other actions as may be applied. The design of a reinforced concrete (R.C.) beam involves the selection of the proper beam size and area of reinforcement to carry the applied load without failing or deflecting excessively.

Under the actions listed above, a horizontal reinforced concrete beam will majorly experience bending moment and shear force. Depending on the loading and orientation, the beam may experience torsion (twisting), as found in curved beams or beams supporting canopy roofs. For raker beams, the presence of axial force can be quite significant in the design.

Longitudinal reinforcement is used to resist bending moment, and also enhance the shear force capacity of a beam. Stirrups (links) are used for resisting any excess shear force and torsion (where applicable). In deep beams or beams subjected to torsion, sidebars can be used to enhance the torsion capacity and also prevent cracking. The depth (d), width (b), and disposition of reinforcements define the load-carrying capacity of a beam and forms the essence of their design.

In typical reinforced concrete buildings, floor beams can be categorised into;

T-beams and L-beams are generally referred to as flanged beams. T- beams are usually internal beams, while external beams (perimeter beams) are usually L – beams. Beams that are not carrying any slab load are more often rectangular beams. Beams in a reinforced concrete building can also be described in terms of their support condition such as simply supported, cantilever beams, or continuous beams.

The steps in the design of a reinforced concrete beam are as follows;

Preliminary sizing of a beam can be influenced in a lot of ways. However, deflection criteria can be used as a starting point in the analysis, even though experience is the best. Long span beams will require deeper sections, and at the same time, the magnitude of loading will also have an effect on the sizing.

Sometimes, architectural constraints can limit your options in selecting the depth and width of reinforced concrete beams. If the headroom of the building is low, you cannot afford very deep sections unless the beams are directly aligned with the partitions. The width of the block walls can also constraint the width of the beam. This is however different if a suspended ceiling will be used to conceal the beams and give the soffit of the floor a uniform look.

A general guide to the size of a beam may be obtained from the basic span-to-effective depth ratio from Table 7.4N of the BS EN 1992-1-1. The following values are can be used as a guide;

The width may have to be very much greater in some cases, especially when a larger width is needed to reduce the shear stress in the beam. As said earlier, the size is generally chosen from experience. Many design guides are available which assist in design.

Clause 5.3.2.1 of EN 1992-1-1:2004 covers the effective flange width of beams for all limit states. For T-beams, the effective flange width, over which uniform conditions of stress can be assumed, depends on the web and flange dimensions, the type of loading, the span, the support conditions, and the transverse reinforcement. The effective width of the flange should be based on the distance lo between points of zero moment, which is shown in Figure 3.

The flange width for T-beams and L-beams can be derived as shown below. The notations are shown in figure 4.

In the manual analysis of floor beams, loads are transferred from slab to beams based on the yield line assumption. However, finite element analysis will use a numerical approach to transfer loads from the slab to the beam. The magnitude of load transferred depends on if the slab is spanning in one-way or two-way. Typically, for a two-way slab, the loads are either triangular (for the beam parallel to the short span direction of the slab) or trapezoidal (for the beam parallel to the long span direction of the slab) as shown in Figure 5.

Typical load distribution from slab to beam is shown in the figure above. The analysis of trapezoidal and triangular loads on beams can be tedious especially for continuous beams with variable loading and unequal spans.

However, for beams of equal span and uniform loading, coefficients for bending moment and shear can be obtained from Chapter 12 of Reynolds and Steedman (2005). For the sake of convenience, the load transferred from the slab to the beam can be approximated as a uniformly distributed load, and the formulas for the transfer of such loads are given in Chapter 13 of Reynolds and Steedman (2005). They are presented in Table 1.

Beams in a building can also be subjected to other loads and the typical values are;

The primary purpose of structural analysis in building structures is to establish the distribution of internal forces and moments over the whole or part of a structure and to identify the critical design conditions at all sections. The geometry is commonly idealised by considering the structure to be made up of linear elements and plane two-dimensional elements.

For the ultimate limit state only, the moments derived from elastic analysis may be redistributed (up to a maximum of 30%) provided that the resulting distribution of moments remains in equilibrium with the applied loads and subject to certain limits and design criteria (e.g. limitations of depth to neutral axis).

Different methods can be used for the elastic analysis of statically indeterminate beams such as;

Some coefficients are also provided in the code of practice for the evaluation of the bending moment and shear force in continuous beams.

An adequate concrete cover should be provided in reinforced concrete beams for the following reasons;

The minimum cover to ensure adequate bond should not be less than the bar diameter, or equivalent bar diameter for bundled bars, unless the aggregate size is over 32 mm. Under normal conditions, concrete cover of 35mm to 40 mm is usually adequate for beams.

The stress block of a singly reinforced beam section (Eurocode 2) is shown in Figure 6;

From EC2 singly reinforced concrete stress block, the moment resistance capacity of the beam MRd is given by;

From the stress block distribution;

Clause 5.6.3 of EC2 limits the depth of the neutral axis to 0.45d for concrete class less than or equal to C50/60. Therefore for an under reinforced section (ductile failure);

Also from the reinforced concrete stress block, we can obtain the tensile design moment as;

Substituting equation (6) into (5) and making As1 the subject of the formula;

Reinforcing bars should be well anchored so that the bond forces are safely transmitted to the concrete avoiding longitudinal cracking or spalling. Transverse reinforcement shall be provided if necessary. Types of anchorage are shown in Figure 7 below (Figure 8.1 EC2).

For bent bars, the basic tension anchorage length is measured along the centreline of the bar from the section in question to the end of the bar, where:

η1 is a coefficient related to the quality of the bond condition and the position of the bar during concreting
η1 = 1.0 when ‘good’ conditions are obtained and
η1 = 0.7 for all other cases and for bars in structural elements built with slip-forms, unless it can be shown that ‘good’ bond conditions exist

Sufficient reinforcement should be provided at all sections to resist the envelope of the acting tensile force, including the effect of inclined cracks in webs and flanges.

In EC2, the concrete resistance shear stress without shear reinforcement is given by;

If θ is greater than 45°, select another section.

A beam should not deflect excessively under service load. Excessive deflection of beams can cause damages and cracking to partitions and finishes. It can also impair the appearance of the building and cause great concern to the occupants of the building.

The selection of limits to deflection which will ensure that the structure will be able to fulfill its required function is a complex process and it is not possible for a code to specify simple limits which will meet all requirements and still be economical. Limits are suggested in the code but these are for general guidance only; it remains the responsibility of the designer to check whether these are appropriate for the particular case considered or whether some other limits should be used.

For deemed to satisfy basic span/effective depth (limiting to depth/250);

The limiting basic span/ effective depth ratio is given by;

The value of K depends on the structural configuration of the member and relates the basic span/depth ratio of reinforced concrete members. This is given in the table 2;

According to clause 7.3.1 of EN 1992-1-1:2004, cracking is normal in reinforced concrete structures subject to bending, shear, torsion or tension resulting from either direct loading or restraint or imposed deformations. However, cracking shall be limited to an extent that will not impair the proper functioning or durability of the structure or cause its appearance to be unacceptable.

Crack width in beams may be calculated according to clause 7.3.4 of EN 1992-1-1:2004. A simplified alternative is to limit the bar size or spacing according to clause 7.3.3. If crack control is required, a minimum amount of bonded reinforcement is required to control cracking in areas where tension is expected. The amount may be estimated from equilibrium between the tensile force in section just before cracking and the tensile force in reinforcement at yielding or at a lower stress if necessary to limit the crack width.

The maximum and minimum areas of steel required in reinforced concrete beams are given in the Table 3.

In the most simplified manner, the detailing guide for beams is as shown below. However, in the most practical terms for simple residential buildings with moderate spans, reinforcements are rarely curtailed (except at the supports hogging areas) for ease in construction, especially where manual iron bending is employed. Note that to satisfy anchorage requirements, take the bob length for beams as 15  (15 x diameter of reinforcement).

The bending moment and shear force diagram due to the applied load is shown below;

Since k < 0.167 No compression reinforcement required

Since flange is in tension, we use the beam width to calculate the value of k (this applies to all support hogging moments)

σcp = NEd/Ac < 0.2fcd (Where NEd is the axial force at the section, Ac = cross sectional area of the concrete), fcd = design compressive strength of the concrete.) Take NEd = 0