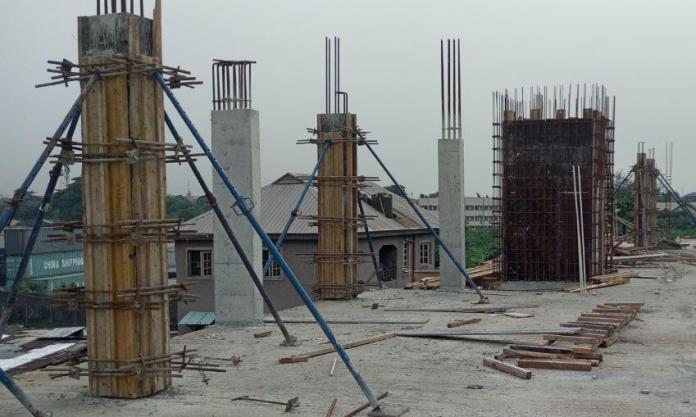 Columns are vertical or inclined compression members used for transferring superstructure load to the foundation. The structural design of reinforced concrete (R.C.) columns involves the provision of adequate compression reinforcement and member size to guaranty the stability of the structure. In typical cases, columns are usually rectangular, square, or circular in shape. Other sections such as elliptical, octagonal, etc are also possible.

Columns are usually classified as short or slender depending on their slenderness ratio, and this in turn influences their mode of failure. In framed structures, columns are either subjected to axial, uniaxial, or biaxial loads depending on their location and/or loading condition. EN 1992-1-1:2004 (Eurocode 2) demands that we include the effects of imperfections in the structural design of columns. The structural design of reinforced concrete columns is covered in section 5.8 of EC2.

When columns are not properly designed, they can fail by;

The steps in the design of reinforced concrete columns are;

Lateral stability in braced reinforced concrete structures is provided by shear walls, lift shafts, and stairwells. Therefore all lateral actions are transferred and resisted by the stiff stabilising members. In a braced column the axial load and the bending moments at the ends of a column arise from the vertical loads acting on the beams. The horizontal loads do not affect the forces or deformation of the column. The columns do not contribute to the overall horizontal stability of the structure.

In unbraced structures, resistance to lateral forces is provided by bending in the columns and beams in that plane. The column ends can deflect laterally. In a column in an unbraced structure, the axial force and moments in the column are caused not only by the vertical load on the beams but also by the lateral loads acting on the structure and additional moments due to the axial load being eccentric to the deflected column.

The major action effects on columns are compressive axial force, bending moment, and shear force. In the manual design of reinforced concrete columns, the design axial force can be obtained using the tributary area method or by summing up the support reactions from the beams supported by the column. The self-weight of the column should be included in the calculation of the design axial force.

In the tributary area method, the floor panels supported by the columns are divided into equal parts, and the load from each part transferred to the nearest column. The process is shown in Figure 2.

For the manual analysis of column design moment, sub-frames can be used to obtain the maximum design moment (see Figure 3). The recommendation is that you should consider the adjacent beams fully fixed, while you reduce their stiffness by half, because it will be an overestimation of the stiffness of the beams to consider all the ends fully fixed. (Details of this can be found in Reynolds and Steedman, 2005, Table 1, and Reynolds, Steedman, and Threlfall, 2008, Table 2.57).

Slenderness in the Design of Reinforced Concrete Columns

Column design in EC2 generally involves determining the slenderness ratio (λ), of the member and checking if it lies below or above a critical value λlim. If the column slenderness ratio lies below λlim, it can simply be designed to resist the axial action and moment obtained from elastic analysis, but including the effect of geometric imperfections. These are termed first-order effects. However, when the column slenderness exceeds the critical value, additional (second-order) moments caused by structural deformations can occur and must also be taken into account.

So in general, second order effects may be ignored if the slenderness λ is below a certain value λlim.

If the end moments M01 and M02 give tension on the same side, rm should be taken positive (i.e. C ≤ 1.7), otherwise negative (i.e. C > 1.7). For braced members in which the first-order moments arise only from or predominantly due to imperfections or transverse loading rm should be taken as 1.0 (i.e. C = 0.7):

According to clause 5.8.3.2 of EC2, the slenderness ratio of an isolated member is defined as follows:

where:
l0 is the effective length
i is the radius of gyration of the uncracked concrete section (i = h/√12 for rectangular sections)

However, for compression members in regular braced frames, the slenderness criterion should be checked with an effective length l0 determined in the following way:

Where;
k1, k2 are the relative flexibilities of rotational restraints at ends 1 and 2 respectively.
L is the clear height of the column between the end restraints
k = 0 is the theoretical limit for rigid rotational restraint, and k = ∞ represents the limit for no restraint at all. Since fully rigid restraint is rare in practice, a minimum value of 0.1 is recommended for k1 and k2.

According to clause 5.8.5 (1), the methods of analysis include a general method, based on non-linear second order analysis and the following two simplified methods:

The method of nominal curvature has been used in this article, which is mainly suitable for isolated members with a constant normal force.

where:
M0Ed is the 1st order moment, including the effect of imperfections,
M2 is the nominal 2nd order moment

The maximum value of MEd is given by the distributions of M0Ed and M2; the latter may be taken as parabolic or sinusoidal over the effective length.

M01 and M02 should have the same sign if they give tension on the same side, otherwise opposite signs. Furthermore, |M02| ≥ |M01|.

The nominal second order moment M2 in Expression (4) is;

For constant cross-section, c = 10 (≈ π2) is normally used. If the first-order moment is constant, a lower value should be considered (8 is a lower limit, corresponding to constant total moment).

According to clause 5.8.3.1 of EC2, if the slenderness, λ, is less than λlim, the column should be designed for the applied axial load, NEd, and the moment due to first-order effects, MEd, being numerically equal to the sum of the larger elastic end moment, M02, plus any moment due to geometric imperfection, NEd.ei, as follows:

Where;
ei is the geometric imperfection = (θil0/2)
θi is the angle of inclination and can be taken as 1/200 for isolated braced columns and l0 is the effective length (clause 5.2(7)).

According to clause 6.1(4) the minimum design eccentricity, e0, is h/30 but not less than 20 mm where h is the depth of the section.

Once NEd and MEd have been determined, the area of longitudinal steel can be calculated by strain compatibility using an iterative procedure.. However, this approach may not be practical for everyday design and therefore The Concrete Centre has produced a series of design charts, similar to those in BS 8110:Part 3, which can be used to determine the area of longitudinal steel.

According to clause 5.8.8.3 of EC2, for members with constant symmetrical cross sections (including reinforcement), the following relation may be used:

where:
Kr is a correction factor depending on axial load
Kϕ is a factor for taking account of creep
1/r0 = εyd/(0.45d)
εyd = fyd/Es
d is the effective depth
Es is the elastic modulus of steel = 200 kN/mm2

However, if all reinforcement is not concentrated on opposite sides, but part of it is distributed parallel to the plane of bending, d is defined as

where is is the radius of gyration of the total reinforcement area.

where:
n = NEd /(Acfcd), relative axial force
NEd is the design value of axial force
nu = 1 + ω
nbal is the value of n at maximum moment resistance; the value 0.4 may be used
ω = Asfyd /(Acfcd)

The effect of creep should be taken into account by the following factor:

When λ > λlim, critical conditions may occur at the top, middle or bottom of the column. The values of the design moments at these positions are, respectively (see Figure 5):

M0Ed is the equivalent first-order moment including the effect of imperfections at about mid-height of the column and may be taken as M0e as follows:

According to clause 5.8.9 of EC2, separate design in each principal direction, disregarding biaxial bending, may be made as a first step. Imperfections need to be taken into account only in the direction where they will have the most unfavourable effect.

and if the relative eccentricities ey/h and ez/b satisfy one the following conditions:

b, h are the width and depth of the section
beq = iy.√12 and heq = iz.√12 for an equivalent rectangular section
λy and λz are the slenderness ratios l0/i with respect to the y- and z-axis respectively
iy, iz are the radii of gyration with respect to y- and z-axis respectively
ez = MEd,y /NEd; eccentricity along z-axis
ey = MEd,z /NEd; eccentricity along y-axis
MEd,y is the design moment about y-axis, including the second-order moment
MEd,z is the design moment about z-axis, including second order moment
NEd is the design value of axial load in the respective load combination

If the condition of Expression (12 and 13) is not fulfilled, biaxial bending should be taken into account including the 2nd order effects in each direction (unless they may be ignored according to clauses 5.8.2 (6) or 5.8.3 of EC2). In the absence of an accurate cross-section design for biaxial bending, the following simplified criterion may be used

where:
MEd,i is the design moment around the respective axis, including a 2nd order moment.
MRd,i is the moment resistance in the respective direction
a is the exponent;
for circular and elliptical cross-sections: a = 2

Table 1: Values of ‘a’ exponent for rectangular sections

Linear interpolation can be used for intermediate values

Where:
Ac is the gross area of the concrete section
As is the area of longitudinal reinforcement

Critical Slenderness for the z-direction