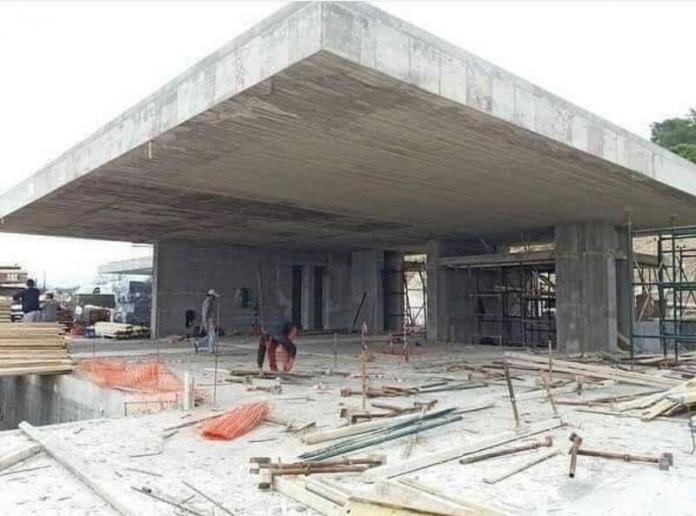 A structural engineer posted a picture of a large cantilever slab construction on LinkedIn, and so many reactions have followed the picture due to its size and dimensions. Cantilever structures are generally structures that are fixed (or continuous) at one end, and free (unsupported at the other end). As a matter of fact, they are one of the most challenging structures to design given that the bending moment increases with the square of the length, while the deflection increases to the fourth power of the length. As a result, controlling deflection and dealing with stability of large span cantilever structural systems is always a challenge in design.

We have posted the comments from various professionals on the post to enable us review, scrutinize, and assess the possibility of designing and constructing such type of structure. However the exact span, design data, calculation sheet, and drawings of the structure were not made available, but a lot of people still managed to lend their voices to the construction.

Let us look at their responses below;

(1) A senior engineer from New Delhi area of India doubted the stability of the structure citing inadequate support conditions. He suggested that cables could have been used to support the slab further. According to him,

Doesn’t look like it is safe. The slab is too thick whereas the supporting structures are too thin. Also, normally such thick slabs are designed as flat slabs but I don’t see the flat slab connection type being followed at the support junctions. It looks like to take care of the cantilever load and moments coming on the slab the thickness has been increased. Hopefully the designer has checked all the loads and moments properly otherwise it is going to fail in the long run. The best option would have been to provide some sort of pulling arrangements at the top corner of the slab via cables or pin jointed stereo frames at the outmost corner where there is no support from the bottom of the slab and that way the designer would have succeeded in decreasing the slab thickness as well as given an aesthetic look to it.

(2) Another structural engineer from India attributed it to the power of post tensioned concrete design as he wrote;

(3) A registered Professional Engineer (P.E) from the USA commented that the loading on the slab may not be high enough to cause serious problems. According to him,

(4) A retired engineer from India wrote;

This is possible. The slab must have been designed as two adjecent edges supported slab. I did come across such a design in early stages of my career as structural engineer

(5) A registered civil engineer from Nigeria expressed doubts over the safety of the slab and said,

The span of this cantilever slab seems to be much, and may be unsafe.

(6) A senior structural engineer (M.Tech) from India also considered the safety of the structure to be doubtful due to the lack of a back span and said,

That seems to be a dangerous cantilever. I don’t see a continuous backing portion either. I hope it must have been designed and checked well.

(7) The idea of lack of back-span was also raised by another engineer who said that it does not matter whether the slab was post tensioned or not. According to him;

No back span, seems to be very dangerous. Whether it is PT or NonPT the cantilever behaviour is same. Looks very huge self weight due to higher thickness

(8) A civil engineer from Nigeria pointed out that a blend of lightweight materials on a steel framing can be used to achieve the structural system. According to him,

However, materials like POP may not be adequate or durable given the exposure of the structure. However, the use of polystyrene can work, after which it will be screeded with mortar to give a finished appearance of concrete. Polystyrene has be extensively used for doing concrete fascia and other building elements.

(9) Another Engineer pointed out that the image could be edited, because the support system provided for the structure (walls and columns from the picture) looked too small to support the massive weight of the cantilever structure. According to him,

Looks to me like a edited image of the structure but if it’s true I don’t know how this structure is safe. Supports looks weaker than the heavy cantilever slab resting on it.

(10) Another engineer who is rounding up his PhD in Spain pointed out that the structure must be post tensioned, however, it seems unsafe especially in the presence of any seismic event. According to him;

Post-tension! But even if it’s not behaving similarly in cantilever spans. The thickness! Huge Self weight! with moderate seismic load or any lateral load, it will make severe damages! Please, treat Infrastructure in high responsibilities.

(11) An independent Structural Engineer with over 39 years of experience from India suggested that the most important thing is to balance the weight of the structure and the moment generated at the supports. According to him,

Main thing is to see the balancing weight and Moment at the support and the section of slab should be with max. thickness at supports and minimum thickness at free end , we have already designed and constructed a stadium at Dehradun in 2001 & standing safe till date.

However, in as much as the exact details of the structure are not available, what do you think?