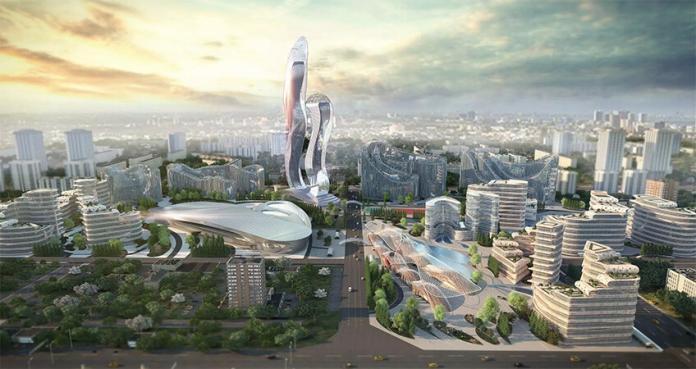 Senegalese-American R&B singer Akon, is moving forward with plans to build a US$6 billion smart city in his country of birth, Senegal. Having finalized an agreement in January of this year, he claims to have raised at least one-third of the funding needed.

Dubbed Akon City and due for completion in about ten years, Akon’s 2,000-acre (809-hectare) project is being touted as an eco-friendly, mixed-use development open to all members of the African diaspora. Located two hours away from the capital Dakar and south of the West African nation’s relatively new Blaise Diagne International Airport, it may be the first LEED-certified project on the continent, if realized. Construction is slated to begin in 2021.

Akon is promoting his latest endeavor as a boon for both tourism and business in the region and has received considerable support from the Senegalese government, including through a partnership with SAPCO, the state’s tourism agency. While the vision is still low on specifics, Akon City’s official website markets the development as a venue for middle- and high-income residences, education and “training” services, and professional activities. It will run on Akoin, a new cryptocurrency that the singer suggests will be compatible with a variety of smartphones and other cellular devices, as well as with other cryptocurrencies like Bitcoin and Ethereum.

The project is being jointly developed by Los Angeles-based KE International and Dubai-based Bakri & Associates Development Consultants, with CEO Hussein Bakri as its lead architect. According to Business Insider, Bakri & Associates claims that Akon City will take advantage of traditional and newly-developed construction materials, including lighter-weight, more efficient glass-and-steel components. Buildings will be powered by clean energy, likely by Akon Lighting Africa, the singer’s solar energy project that aims to install solar-powered lights across Africa.

A series of dramatic renderings show an agglomeration of futuristic, ribbon-like structures towering into the sky. On the city’s official website, it is described as “an extension of the sea into the land with waves diving deep into the roots of each building.” Akon Tower, the plan’s architectural centerpiece, would far exceed Senegal’s current tallest structure, an 250-foot (76.2-meter) apartment building in Dakar.

As quixotic as it sounds, the plan is not without its skeptics. While certain government officials have praised Akon’s investment in Senegal at a time when the coronavirus pandemic has reduced tourism to a trickle, some local residents doubt the project’s efficacy. Senegal’s economy has experienced breakneck growth in recent decades, but poverty is still prevalent among its 15.4 million people. Akon himself told Business Insider that he sees more “elite local Senegalese” moving into the development first, including himself.

According to Reuters, Mayor Magueye Ndao of Ngueniene, the municipality where part of Akon City will be built, has expressed some cautious optimism about the proposal. Ndao hopes that the project will be realized and that many of its promised services, including youth and job training, will be brought to the area.

Others, though, are convinced that Akon City represents another smart city pipe dream—a project that will inevitably fizzle out due to lack of funding or government support. Xavier Ricou, an architect and the former director of Senegal’s APIX investment agency, told Reuters that Akon City will likely end up like most other city proposals seen in Senegal: just a proposal. If fears about investor commitments and feasibility prove valid, Ricou’s prediction could well be correct.