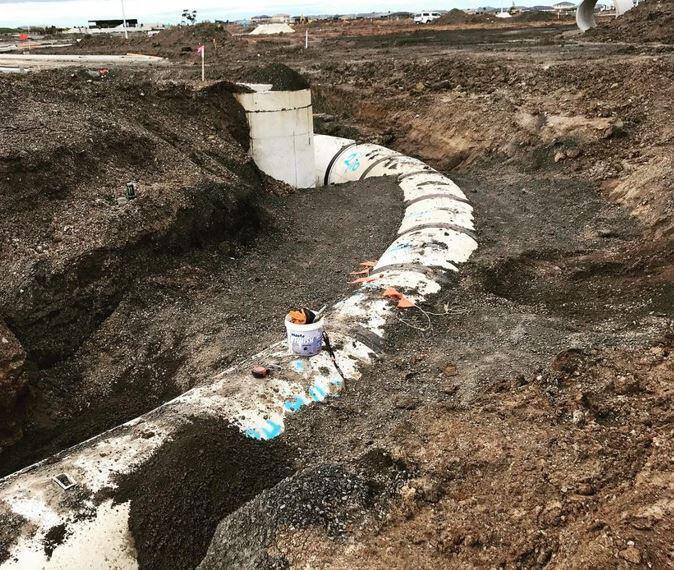 Concrete is the building material that is most usually used for sewer systems because of its favorable structural qualities, capacity for prefabrication, and freedom from form restrictions. For a variety of reasons, such as the effects of (bio)chemical deterioration, ageing, and the loss of soil support, the structural integrity of concrete sewer pipes degrades with time.

The design life of a sewer system is several decades. Due to the capital-intensive nature of maintaining a sewer system as well as the severe societal and financial consequences of catastrophic failure, accurate condition evaluation has become increasingly important over time.

The two most frequent sources of data used to determine whether to repair or replace sewers are Closed-Circuit Television (CCTV) inspection and age. The difficulty of revealing deterioration on the outside of the sewer pipe wall, the low accuracy and reliability of visual inspection data, and the weak correlation between visual inspection data and material properties are just a few drawbacks that have recently been discovered with regard to these inspection methods.

Additionally, the majority of nations lack a database that contains precise information on the state of the subsurface infrastructure. Thus, it is obvious that clear knowledge about the real structural state of sewer systems is required in order to enhance current inspection techniques and enable adequate condition assessments.

The structural state of sewer networks has been the subject of numerous study investigations during the past few decades. Much emphasis has been paid to the biogenic sulphuric acid-induced degradation process that typically occurs in concrete sewer pipes.

Investigations into the sulphuric acid-producing bacteria and the chemical deterioration mechanisms that result at the inner surface of sewer pipes have revealed that the concrete’s calcium hydroxide and calcium silicate hydrate react with the acid to create gypsum and/or ettringite, which frequently causes an increase in porosity and, as a result, a decrease in strength and stiffness.

Additionally, naturally occurring carbondioxide in soil may migrate to the outside of concrete sewer pipes, where it may interact with hydrated cement in the presence of moisture. The strength, porosity, and pore size distribution of the cement paste may change as a result of this carbonation process. The assessment of the structural failure behavior of sewer pipes was the focus of additional experimental researches.

Despite the fact that the aforementioned investigations have focused  on important issues and facts, a complete understanding of how (bio)chemical attack affects the mechanical performance of in-situ concrete sewer pipes is still lacking. However, this information is necessary to boost the suitable recommendations that municipalities and other stakeholders can use when making decisions about the upkeep and replacement of concrete sewer pipe systems.

Recently, researchers (Luimes et al, 2022) from the Department of the Built Environment, Eindhoven University of Technology, Eindhoven, The Netherlands, and Department of Hydraulic Engineering, Deltares, MH Delft, The Netherlands,  studied the effects of biochemical attack on the mechanical performance of used concrete sewer pipes which they published in the journal, Construction and building materials (Elsevier).

The test program involved concrete sewer pipes that had been in use for between 22 and 95 years. During that time, exposure to particular in-situ circumstances had resulted in some chemical attack, which may have been accompanied by mechanical damage from traffic loads and excavation. This might have reduced the concrete’s mechanical qualities, which might have affected the pipe’s ability to support structural loads. The inner and outer surfaces of the sewer pipes were first given a rigorous visual inspection during the study, and were then classified using various surface condition classes in order to explore these issues in more detail.

The cross-sections of the sewer pipes were also tested for residual alkalinity using a phenolphthalein method, where a pH indicator was provided by a 1 percent solution of phenolphthalein. The solution turns from pink to magenta in moderately alkaline conditions with a pH in the range of 9.2 to pH 10. The solution turns magenta in extremely alkaline surroundings with a pH > 10, but it stays colorless in somewhat alkaline and acidic conditions with a pH 9.2.

The dissolution of solid calcium-hydroxide in the pore solution causes the pH of the concrete to rise to a level above 12.5 to 13, which is shown by the magenta zones. On the other hand, the colorless zones indicate the presence of a chemical attack in the past, which may have been brought on by carbonation (8.3 <  pH < 9) and biogenic suphuric acid corrosion (1< pH < 3).

The types and degree of biochemical attack were respectively assessed by performing XRD analyses and phenolphthalein tests. The following conclusions were obtained from the findings.

According to the researchers (Luimes et al, 2022), the study’s findings can be used to develop and improve inspection and condition assessment standards. Further research has shown that biogenic sulphide corrosion can significantly contribute to the mechanical deterioration of sewer pipes, making it prudent to keep an eye on how this corrosion process is progressing inside in-situ sewer pipes.

The contents of the cited original article published by Construction and Building Materials (Elsevier) is open access, under the CC BY license (http://creativecommons.org/licenses/by/4.0/) which allows you to share and adapt (remix) the article provided the appropriate credit is given, and the link to this license provided.