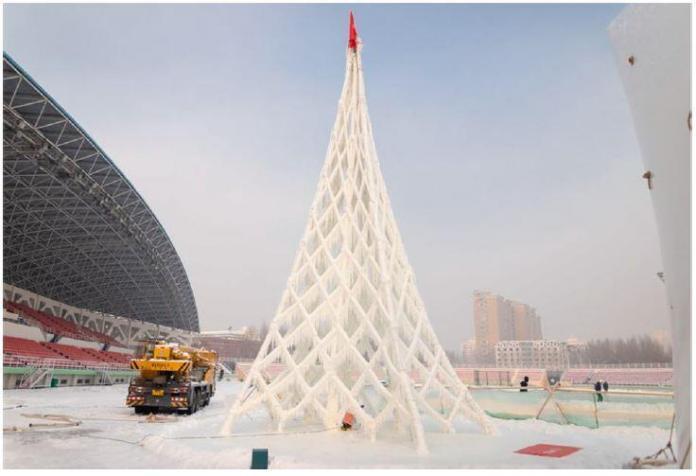 Pykrete is a material used for temporary buildings in cold climates. It is made of a mixture of water and a number of additives, such as wood chips, cellulose sheets that have been dissolved, sand, gums, and combinations of any of those. It was initially created so that ships could be built in cold environments. In the past ten years, this substance has typically been used in shell buildings that have been built with ropes and inflatable fabric formwork (see Figure 1).

The usage of Pykrete in linear element constructions has recently been studied, and some low-rise structures have been constructed as a result. According to Pronk et al (2022), the year 2019 saw the construction of a tower-like Pykrete structure for the International Ice and Snow Innovation Design and Construction Competition, based on an idea from the Eindhoven University of Technology. It is the tallest pykrete structure with linear elements to date, this structure has a height of 11 m.

Researchers (Pronk et al, 2022) from the Department of the Built Environment, Eindhoven University of Technology, Netherlands have carried out a study on the mechanical performance of pykrete beam elements. Experimental tests from the study were compared with previously conducted studies. Furthermore, the researchers presented the optimization  and numerical model of a pykrete tower’s design, followed by a description of the construction techniques. The article was published in the journal, Structures (Elsevier).

Making and Design Concept of the Lattice Tower

Ten principal load-bearing parts, five of which are exterior (shown in blue in Figure 2) and five of which are internal, extend vertically from the bottom to the top (green elements in Figure 2). Self-weight and wind pressure of 0.5 kN/m2 were taken into account. Recent research literature served as the source for the material’s mechanical properties.

Fire hoses filled with pykrete were used to create the members of the lattice tower. They transfer the wind loads in addition to the dead weight of the structure to the foundations. Compression in the inner columns is primarily produced by the structure’s self-weight. Due to the additional weight of the structural elements, these compressive forces are low at the top of the tower and increase at ground level, as typical in all structures. As a result, it is anticipated to have a larger cross section close to the foundation.

According to the research, the tower’s construction was separated into three stages:

Based on the preliminary tower design, two main types of samples were evaluated. The cross-section of the first kind of sample is made up of pykrete and a fire hose. A tube with a 64 mm diameter was used as the hose. Pykrete is poured into the tube, and a 44 mm thick second layer of pykrete is applied around the tube, making the section’s overall diameter 154 mm. The mixture of additives in Pykrete contains cellulose at a concentration of 20 g/L (2%).

The second type of sample, which has a smaller cross-section was used to test for secondary elements. It was made up of a rope with a diameter of 12 mm that is encircled by a layer of pykrete measuring 15 mm. The additive concentration is 80 g/L (8%).

The greatest length that can be tested corresponds to a sample length of 450 mm for both types of samples. Testing was done using three different methods: compression, tension, and 4-point bending. For pykrete samples, there aren’t any currently available standardised tests. It is important to understand that pykrete’s mechanical characteristics vary depending on temperature.

In comparison to common building materials, pykrete’s mechanical characteristics are still being extensively studied. Tests have been done on a large number of samples in order to compare different pykrete compositions. The force–displacement relationship obtained by the bending and compression tests in the current study generally followed the major trends already observed in previous studies. However, some of the takeaways from the study were;

The full results of the test data are available in the publication.

Optimization and Numerical Model of the Tower

Grasshopper® software was used to optimize the tower’s design based on the results of the investigation. It is a Rhino® visual programming plugin that enables the execution of parametric designs based on scripts. A Live Physics engine called Kangaroo2® allows for interactive simulation, optimization, and form-finding within Grasshopper.  Kangaroo2® uses dynamics relaxation With this approach, a nonlinear equation system’s solution is reduced to an explicit iterative calculation. Therefore, a damped dynamic process led to the proposed static solution.

The algorithm consists of the subsequent phases. The anchor points, the self-weight, the major element stiffness, and the secondary element stiffness are first defined as the constraint conditions. Then, utilizing Newton’s second law, masses are defined at each node. The total residual forces for each node, the speed, and the position are computed at each iteration. When the geometry reaches its static state, the algorithm will terminate.

The optimum design consists of a series of curves that can be connected to form a mesh. In other words, the gradient of the energy that is in the direction of the forces (masses) defined at each node is used to move the nodes in order to minimize the elastic energy.

The next step is to assess the design’s structural performance in SCIA® under wind loads and self-weight. The elements’ cross-sections are manually modified (decreased or increased). For the primary and secondary parts, there can only be three different sections. Finally, the original design and the new cross-sections are added as a new input in Grasshopper®, and Kangaroo2® generates a new shape.

Pykrete is a promising and environmentally friendly material for constructing buildings in cold areas. Up until now, inflatable shell structures were the only types of pykrete structures. However, this restricts the kind of constructions that can be made to the shapes of inflatables that can be built.

According to the study, producing truss structures would present new opportunities. By recommending a construction method and performing testing on the sections, the research enabled the creation of an 11 m tall tower made up of linear elements. By using form-finding, the design was optimized, and SCIA® was used to verify the structure under actual loading. The experimental testing have demonstrated that, before constructing more ambitious structures, research on the buckling of these components is required.

The contents of the cited original article published by Structures (Elsevier) is open access, under the CC BY license (http://creativecommons.org/licenses/by/4.0/) which allows you to share and adapt (remix) the article provided the appropriate credit is given, and the link to this license provided.