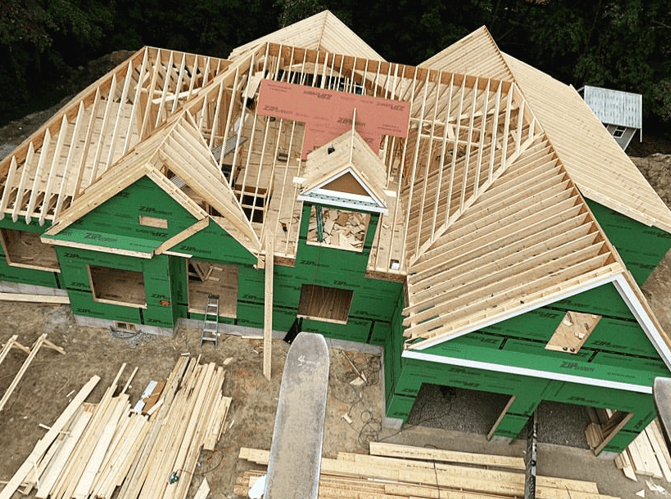 Rafters are loading bearing structural members that are used in roof construction. They typically run from the ridge board or hip of the roof at a sloping angle to the roof wall plate, columns, or roof beams, depending on the support system adopted for the entire roof structure.

By implication, rafters receive the load from the roof covering/sheeting, accessories, and other services that may be attached to it. They are also important members for resisting upward wind pressure on roofs. Rafters can be constructed using steel or timber. Furthermore, they are constructed in series and laid parallel to each other at usually a constant spacing. The spacing of rafters can be determined from the design requirements, type of roof sheeting to employed, type and spacing of purlins, availability of materials, etc.

Under heavy gravity loads, rafters have a tendency to flatten outwards on the walls. This is generally a case of structural failure of rafters, and can lead to the collapse of the walls if the spans are longer and the walls are thinner. To overcome this problem, coupled rafters have been used, which are two opposing rafters joined together by a horizontal tie beam.

However, such roofs were structurally unstable, and since they lacked longitudinal support, they were prone to racking, or horizontal movement-induced collapse. Timber roof trusses were developed later, during the Middle Ages. A cross-braced timber roof truss creates a stable, rigid unit. It should, in theory, balance all lateral forces against one another and only thrust directly downwards on the supporting walls.

The functions of rafters in a roof are as follows;

Steel rafters in portal frames are usually subjected to significant bending moment and shear forces from the dead and imposed loads from the roof. In order to increase the rigidity of the rafters, haunches are introduced at the eaves and at the apex. Lateral stability of the rafters are enhanced by purlins or cross-bracings. In some cases steel curved rafters are used in the design of industrial steel structures.

Timber rafters are popular options in timber/wooden roof structures. Rafters are part of a basic wood framing system and are made of wood lumber. The common rafters form the sloped sides of the triangle on a traditional gable roof, which has a triangular shape. Many common, or general purpose, rafters make up each roof. The number of common rafter units needed for each project is mostly determined by the roof’s size and scope, as well as the distance each unit rafter must span. Timber rafters rely on nails or screws for connection.

The rafters and external walls are then connected with ceiling joists. As a result, the area in the roof is left as a vaulted ceiling that may be finished with insulation and drywall. It could also be left as open space in an attic.

Principal rafters are the largest form of rafter found at the ends of a roof structure in a timber-framed roof. They are commonly used to carry a purlin and sit directly on a tie beam. Principal rafters run from the roof’s ridge to the wall plate; they’re a little heavier than ordinary rafters, and they’re usually framed into a tie beam at a corner post, story post, or chimney post. The principal rafters, when combined with the principal purlins, constitute a very stable roof construction system.

These are rafters that runs diagonally between the roof ridge and the top of the wall plate, forming a hipped roof. A hip rafter connects to the ridge at a 45-degree angle, as opposed to ordinary roof rafters, which run perpendicular to the peak of the roof. Traditional stick-framing techniques can be used to make these rafters, or they can be integrated in a pre-engineered steel or timber truss system.

The valley rafter is the rafter in the valley line that joins the ridge to the wall plate along the meeting line of two sloped sides of a roof that are perpendicular to each other in a roof framing system. To put it another way, it’s the main rafter at the bottom of a hip and valley roof.

A jack rafter is any rafter that is shorter than the whole length of the sloping roof, such as one that begins or ends at a hip or valley. They extend up from the top of the wall plate at a right angle (90°) to abut into an existing hip rafter. A jack rafter is one that has been shortened by falling on a hip rafter or being interrupted by a dormer window.

This is the outermost rafter on a gable end and is occasionally utilised to form a roof overhang. It is one of the two rafters that support the portion of a gable roof that extends beyond the gable wall.

Rafters are designed to be structurally stable under gravity and horizontal loads, without undergoing excessive deflection or failure. The design of rafters often involves selecting the appropriate timber class, dimensions, and spacing that will safely support the roof load for a given roof span. In most cases, tables are available for the selection of rafters.

Rafter span
This is the un-supported length of the rafter along its slope – the diagonal or hypotenuse of a right triangle.

Rafter run
This is the horizontal or level distance covered by the rafter – the bottom chord or base of a right triangle.

Roof span
A roof span is normally the same as the building width between the outer edges of the wall top plates.

Using regularised UK timber dimensions, it is possible to determine the maximum span of timber rafters subjected to different values of live loads according to BS 5268-7.5.

Assumptions in the Preparation of the Table

The following steps may be followed in the installation of rafters;