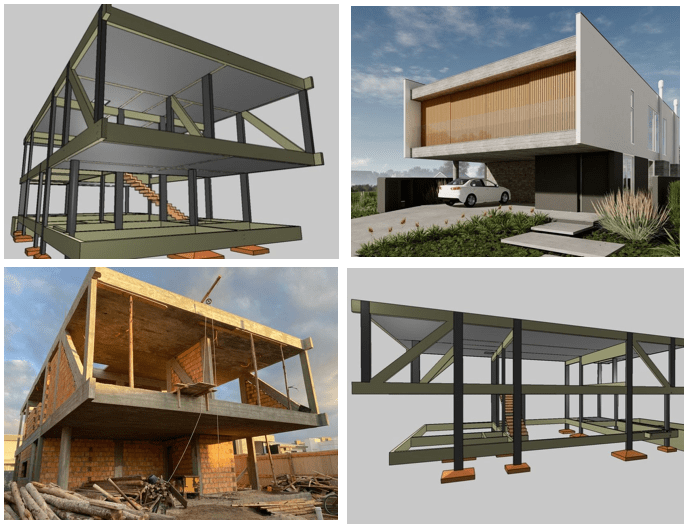 I came across an Instagram post on the design of reinforced concrete cantilever beams that forms part of a modern residential dwelling. According to the author of the post, the cantilever beam is about 5 m long.

Cantilevers are beams that are rigidly fixed at one end, and freely supported at the other end. By implication, they are very susceptible to excessive deflection and vibration.

The architectural rendering of the structure in question is shown in Figures 1 and 2.

As can be seen from the images above, the architectural rendering depicts a contemporary building with a cantilever projection at the front. To solve the problem, the design engineer, decided to introduce a diagonal/slanted reinforced concrete column, which would act as tension members to support the cantilever beam. The structural modelling of the scheme adopted by the structural engineer is shown in Figures 3 to 5.

By all indications, the design has been completed and the contractor has gone to the site. The construction images of the models are shown in Figures 5 – 7.

As can be seen in Figure 7, the reinforced concrete diagonal columns were cast monolithically with the frame of the structure. Then bricks were used to cover the openings to create a plain wall that matches the architectural requirements.

Why did the Model Succeed?

The model adopted by the structural engineer succeeded because there are full walls without openings where the inclined columns can be hidden without any implications. Because there are no openings (doors, windows, or curtain walling) on the first bay of the first floor, the inclined columns can be introduced without affecting the architectural concept of the building.

If there had been need for openings in those walls, the adopted structural scheme would not have been an ideal solution. Therefore the ingenuity of the design engineer is appreciated.

How Efficient is the Model?

The analysis comparison is going to check the effect of introducing a diagonal column on the deflection, bending, and shear force on the structure.

As can be seen above, without the presence of the diagonal columns, the maximum deflection at the free end of the cantilever was 35.261 mm.

A maximum shear force value of 158.518 kN was observed at the fixed end of the cantilever without diagonal columns.

The axial force diagram confirms that the column sitting on top of the cantilever beam is in axial tension, as well as the roof beams.

As can be seen in Figure 15, when diagonal columns were introduced, the maximum deflection at the free end of the cantilever reduced to 23.301 mm.

With the presence of diagonal columns, the shear force at the fixed end of the cantilever is reduced to 106.244 kN as shown in Figure 17.

Axial force diagram in Figure 18 shows that the diagonal column is in axial tension.

A table of comparison has been prepared below to show the effect of diagonal tension column support on the deflection behaviour of long span cantilever beams.