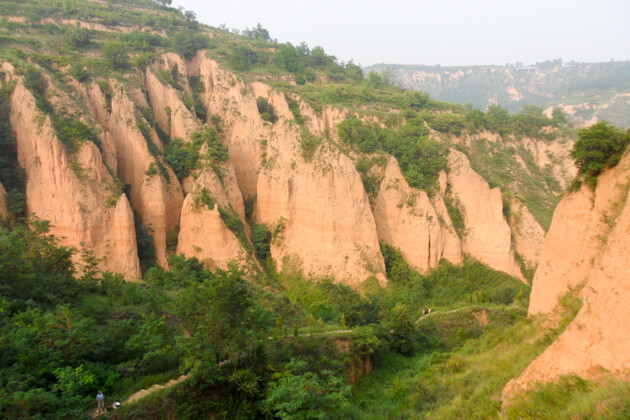 Civil engineers are always faced with one challenge or another on site, and one of the major challenges on site has to do with the nature of the soil to support the structure to be constructed. Some soils exhibit excessive change in volume under constant load and changes in moisture content. Under field conditions, if the addition of water under constant load causes the void ratio to reduce drastically, the soil is said to have collapsed. These soils are predominantly found in the arid regions and appear strong and stiff in their dry natural state, but lose strength and undergo high compression upon wetting.  According to Behzad (2013), almost all natural deposits of collapsible soils are either debris flow deposits or wind deposited soils (loess).

Soils which exhibit this behaviour are usually unsaturated granular soils which in a loose state are maintained by apparent cohesion. This apparent cohesion may be due to the presence of clays at the intergranular contact areas or the accumulation of soluble salts as binders (Murthy, 2012). In South-Western Nigeria, collapsible soils have been observed and studied by Owolabi and Ola (2014).

For a soil sample to collapse, the soil structure must have an open, partially unstable, and unsaturated fabric which must be held in place by apparent cohesion. On wetting and application of high enough stress, the soil fabric will be expected to collapse. For compacted cohesive soils, the collapse behaviour will depend on the percentage of fines, the moulding water content, the dry density, and the compaction energy employed Murthy (2012). Any soil compacted at the dry side of the optimum moisture content and at low dry density will also be expected to develop a collapsible structure.

A method of calculating the collapse settlement of a soil sample was suggested by Jennings and Knight (1975) and reported by Murthy (2012). This involves carrying out double oedometer tests of identical undisturbed samples in the laboratory. Both specimens are kept under a constant pressure of 1 kPa for a period of 24 hours at their natural moisture content after which one specimen is flooded and the other allowed to remain in its natural state. After flooding for 24 hours, the consolidation test is allowed to progress as usual after which the e-LogP curve is plotted for both samples. The collapse settlement is calculated in two parts according to equations (1) and (2).

A building was constructed on a collapsible soil and the double oedometer test carried out on the undisturbed sample gave the results shown in Table 1. The thickness of the collapsible layer is 4 m and the average overburden pressure was 76 kPa. Calculate the collapse settlement for an increase in pressure of 44 kPa.

(1) The first step is to plot the e-log P curve for the two samples as shown below. This has been done using Microsoft Excel.

(2) The virgin compression curve is plotted by drawing a line tangential to the soaked sample curve.

(4) From point e0, an adjusted moisture curve is plotted to be perfectly parrallel to the natural moisture content curve.

(6) Trace down the points where the pressure increment makes contact with the soaked sample curve and adjusted moisture content curve and identify the associated void ratios e1 and e2.

Methods of Foundation and Construction on Collapsible Soils

(1) Utilising deep foundation such as piles to send the load beyond the collapsible layer
(2) Chaining the foundation using continuous reinforced ground beams and slab to minimise differential settlement
(3) In a laboratory study carried out by AlShaba et al (2018) at Egypt, iron powder was used to reduce collapse settlement of collapsible soil by about 46% at a mix ratio of 6% of the dry weight of the soil. When the same mixture was compacted, a reduction ratio of about 86.66% was obtained.
(4) Prewetting and compaction of the collapsible soil
(5) Ayeldeen et al (2016) obtained promising results on improving collapsible soils using biopolymers.