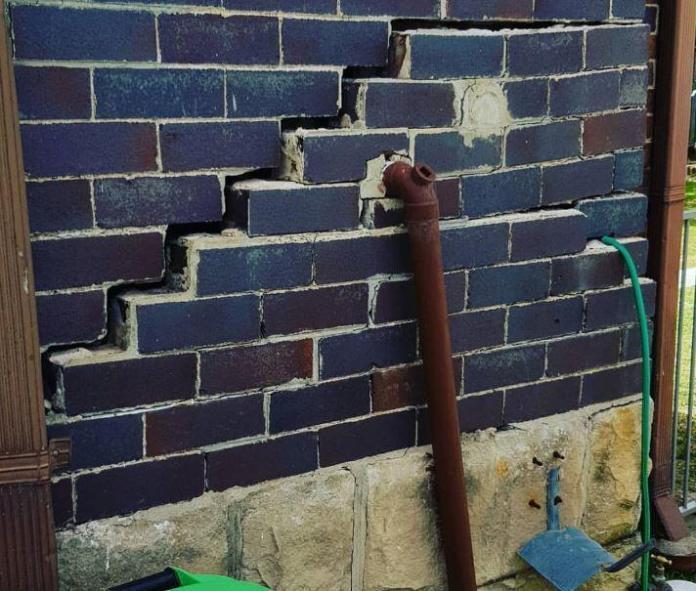 The differential settlement between parts of a structure may occur as a result of the following;

(a) Variation in soil properties
Highly compressible soil may be used to support one part of a structure and an incompressible material for the other. Such differences are typical, especially in glacial deposits, where clay lenses might be found in primarily sandy material or vice versa. Furthermore, some parts of a structure may be built on shallow rock and others on soil or compressible weathered rock in places with uneven bedrock surfaces. Sand and gravel deposits thrown down by the wind or water can vary greatly in density both vertically and horizontally. In such cases, differential settlement may occur in the foundations of structures built on such soil deposits.

(b) Variation in foundation loading
When the magnitude of loads coming from superstructure columns or walls vary significantly, differential settlement may occur unless special design considerations are made to prevent it. For example, in a building with a tower and wings, a differential settlement between the tower and the wings would be predicted unless special foundation design procedures were used to prevent it. Furthermore, a light superstructure might surround a very large piece of machinery in a factory building, and the area supporting the machinery may settle relative to the factory building.

(c) Large loaded area on flexible foundations
When built directly on compressible soil, the settlement of large flexible raft foundations, or big loaded regions consisting of independent foundations of a number of columns, takes on a characteristic bowl form, with the largest settlement in the center and the minimum at the corners. In most cases, the maximum differential settlement is around half of the entire settlement. Even while the maximum differential settlement between the center and corners may be significant in a building made up of a large number of closely spaced equally loaded columns, the relative settlement between columns may be only a fraction of the maximum.

However, where the large loaded region is founded on a relatively incompressible stratum (e.g. dense gravel) overlying a compressible layer, settlement of the structure will occur due to consolidation of the deeper compressible layer, but it will not take the form of the bowl-shaped depression. If the dense layer is thick enough, it will produce a rigid raft, which will eliminate differential settlement to a considerable extent.

(d) Differences in time of construction
This problem happens when an extension is added to a structure several years after the original structure was completed. Although the latter’s long-term consolidation settlements may be nearly complete, the new structure (assuming the same foundation loading as the original) will eventually settle an equivalent amount. To prevent distortion and cracking between the old and new structures, special precautions in the form of vertical joints are required.

(e) Variation in site condition
On a sloping site, it may be necessary to remove a significant thickness of overburden to produce a level site, or one portion of a building area may have been occupied by a heavy structure that had been demolished. Different stress conditions both before and after loading emerge from these variances, resulting in differential settlement or swelling. One part of a site may be normally consolidated, and another part overconsolidated. This will result in variation in the settlement behaviour.

Deformation of Structures and their Supporting Foundations

It is necessary to describe settlements and distortions in line with the established terminology presented in Figure 3 when considering the criteria above in connection to limiting movements. When looking at the visual appearance of a building, a tilt or rotation of more than 1 in 250 is likely to be visible to the human eye. A deflection ratio of more than 1 in 250 or a local rotation of horizontal components greater than 1 in 100 is likely to be very visible. The appearance of framed buildings is affected when loadbearing walls or claddings crack. At eye level, crack widths of more exceeding 3—5 mm are ugly and require repair.

Cracking in structures can lead to loss of weather/water tightness, fire resistance, and thermal and sound insulation characteristics, thereby affecting the serviceability or functionality of the structure. Total settlement can be important to serviceability when connecting to exterior drains or other piping, while deformations can interfere with the proper operation of overhead cranes and precision gear. Relative deflections and rotations may be important for structural stability because they can produce excessive bending strains in members. Excessive tilting might cause a structure to completely collapse.

The amount of damage produced by settlement is partly determined by the order and timing of construction operations. For example, if a tall building is built on a deep clay basement, the excavation’s base will first heave to a convex shape. The foundation soil will consolidate and finally deform to a concave (bowl) shape when the superstructure is built, resulting in a full reversal of curvature of the basement and lowermost stories.

The structural frame of a multi-story housing or office building bears the major portion of the overall dead load. As a result, by the time the frame is finished, the majority of the building’s settlement will have occurred (see Figure 4). Then, at a later time, claddings or finishes will add to the structure’s rigidity and suffer far less deformation than that which has already occurred in the structural frame. On the other hand, this will not be the case for structures like silos. The majority of the settlement in silos does not occur until the compartments are filled for the first time. The contents of the silo can weigh significantly more than the confining structure.

Empirical standards for restricting the movement of structures have been established in order to prevent or reduce cracking and other forms of structural damage. Tables 1 and 2 show some of the criteria. Skempton and Macdonald’s (1956) criteria are consistent with the guidelines for acceptable limits in EN 1997-1:2004 (EC 7) Clause 2.4.9. Clause 2.4.8(5)P stipulates that the limiting values must be agreed upon with the structure’s designer during the design of the building. The relative rotation (or angular distortion) is the key factor for framed buildings and reinforced load-bearing walls, but the deflection ratio is the requirement for unreinforced load-bearing walls that fail by sagging or hogging, as illustrated in Figure 3.

Differential settlement does not have to be taken into account only when structures are to be built on relatively incompressible bedrock. When structures are built on weathered rocks or soils, an estimate of total and differential settlements must be made to determine whether the movements are likely to be tolerated by the structure’s design, or whether they are large enough to necessitate special measures to avoid or accommodate them. The Institution of Structural Engineers (1989), in a report, provides general recommendations on how to approach this study.

It is impractical to design foundations to be completely free of cracks caused by differential settlement. This is because temperature and moisture movements in the structure also cause cracking in walls and ceilings in most buildings with internal plaster finishes. Therefore a certain degree of readily repairable cracking owing to differential settlement should be permitted (Tomlinson, 2001). The risks of damage due to settlement can be calculated using empirical principles based on experience in the case of simple structures on generally uniform compressible soils.

The differential settlement for foundations on sand is unlikely to exceed 75% of maximum movement, and since most conventional structures can withstand 20 mm of settlement between adjacent columns, a limiting maximum settlement of 25 mm was proposed by Tezarghi and Peck (1967).

The maximum settlement limit for raft foundations on sand is increased to 50 mm. Skempton and MacDonald (1956) concluded from a study of the movement of 11 buildings that the limiting maximum differential settlement is roughly 25 mm for a limiting angle of distortion (β) of 1 in 500, the limiting total settlement is 40 mm for pad foundations, and 40—65 mm for raft foundations. Buildings on sands seldom settle by more than 50 mm, according to studies, and in the vast majority of cases, settlement is on the order of 25 mm or less (Sutherland, 1974). These guidelines should not be applied to sands that contain silt or clay, as these materials increase the compressibility of the sand.

Skempton and MacDonald (1956) proposed a design limit for maximum differential settlement of 40 mm for foundations on clays, as well as design limitations for a total settlement of 65 mm for isolated foundations and 65—100 mm for rafts. If the total and differential settlements exceed the serviceability limit state as a result of applying the above empirical rules or conducting a settlement analysis of the structure based on the assumption of complete flexibility in the foundations and superstructure, the engineer has the option of either avoiding settlement or accommodating the movement through appropriate structural design measures.

If the structures themselves are not rigid enough to prevent excessive differential movement with regular spread foundations, one or more of the procedures listed below may be used to limit total and differential settlements to a tolerable level.

(a) Provision of a rigid raft foundation in two or three directions
(b) Provision of deep basements to reduce net bearing pressure on the soil
(c) Transference of foundation loading to deeper and less compressible soil via basements, piers, or piles
(d) Provision of jacking pockets, or brackets, in columns to relevel the superstructure
(e) Provision of additional loading on lightly loaded areas in the form of kentledge or embankments to even out soil pressure distribution

Method (b) is effective in minimizing excessive differential settlement between components of a structure with differing foundation loads, as well as reducing maximum settlements owing to the relief of overburden pressure and excavating for deep basements. As a result, the deepest basements can be given under the structure’s heaviest components, while shallower or no basements can be provided in places with lighter loading.