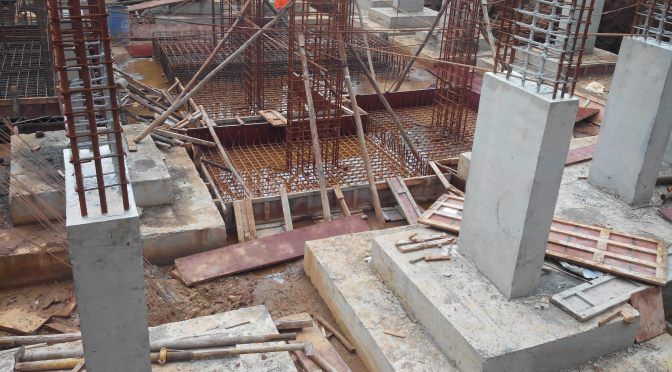 Bearing capacity is the maximum load a soil profile can withstand before undergoing excessive deformation and shear failure. It is the most popular and perhaps the most important information needed for the design of shallow foundations. The allowable bearing capacity of soil is used for the proper sizing of shallow foundations so that the load from the superstructure will not exceed the strength of the soil or lead to an excessive settlement.

If a load is applied gradually to a foundation, the settlement will increase. At a certain point when the load equals the bearing capacity of the soil, sudden failure of the soil supporting the foundation will take place. This sudden failure in which the failure surface will extend into the ground is known as ‘general shear failure‘.

When the soil supporting the foundation is of sand or clay soil of medium compaction, the failure surface of the soil will gradually extend outward from the foundation. When the applied load reaches the bearing capacity of the soil, the foundation movement will be accompanied by sudden jerks, and considerable movement will be required before the failure surface extends into the ground. This is generally referred to as ‘local shear failure‘, and the peak value of the load is not realised in this type of failure.

If the foundation is founded on a loose soil, the failure surface will not extend into the ground surface. The load-settlement plot of this interaction will be steep and practically linear. Such failure is referred to as ‘punching shear failure‘.

The methods of determining the ultimate bearing capacity of soils are;

Soil investigation is therefore one of the most important activities that must be carried out before the commencement of any construction project. In the soil test report, the geotechnical engineer is expected to state the strength of the soil at different layers, and ultimately recommend a suitable foundation. Some of the parameters used in describing the strength of a soil formation for the purposes of estimating the soil bearing capacity are the cohesion and the angle of internal friction of the soil.

Background to the bearing capacity of shallow foundations

Terzaghi in 1943 extended the plastic failure theory of Prandtl to evaluate the bearing capacity for shallow strip footings. After the development of Terzaghi’s bearing capacity equation, several scholars such as Meyerhof (1951 and 1963), Vesic (1973), Hansen (1970), etc worked on this area and refined the solution to what is known as the general bearing capacity equation. This modification allowed for depth factor, shape factor, and inclination factors.

The modified general ultimate bearing capacity equation can be written as;

Where;
Fcs, Fqs, Fγs are shape factors which account for the shearing resistance developed along the surface in soil above the base of the footing
Fcd, Fqd, Fγd are depth factors to determine the bearing capacity of rectangular and circular footings
Fci, Fqi, Fγi are inclination factors to determine the bearing capacity of a footing on which the direction of load application is inclined at a certain angle to the vertical

Solved Example on the determination of bearing capacity

Let us determine the bearing capacity of a simple pad foundation with the following data;

From table, we can determine the bearing capacity factors;

So with this, the allowable bearing capacity of the soil can be stated as 342 kN/m2

Application of Effective Stress Concept in the Analysis of Cohesive Soils

A plate is a flat structural element that has a thickness that is small compared with the lateral dimensions. Plates are bounded by two...
Read more

Shear walls and frames (comprising of columns and beams) are distinct structural systems that can be used in resisting lateral actions in high-rise buildings....
Read more

Billboards are large outdoor advertising structures that are found along highways and city centres. Due to their large size and flexibility for creative output,...
Read more

This should be a long post, but I am going to try and keep it as brief as possible. This post is more like...
Read more

The most widespread alternative for roof construction in Nigeria is the use of trusses, of which timber and steel are the primary choices of...
Read more

Structural failure is real, and it is the duty of structural engineers to identify all possible modes of failure in a structure, and design...
Read more