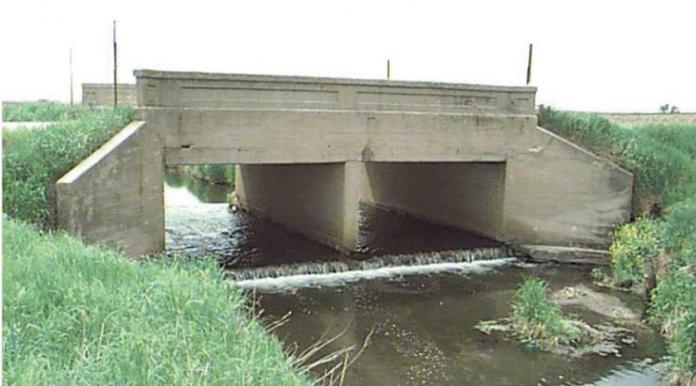 It is generally said that all culverts are bridges but not all bridges are culverts. Bridges are structures that are designed to span over physical obstacles such as water bodies, valleys, or existing highways (fly over bridges). The commonest distinction that is made between bridges and culverts is that the span of culverts is not expected to exceed 6 m, otherwise it should be regarded as a small bridge.

According to the American Association of State Highway and Transportation Officials (AASHTO) the definition of bridges includes culverts with openings measuring more than 6.1 m (20 ft) along the centerline of the road, and also includes multiple pipes where the distance between openings is less than or equal to half of the pipe opening. What this means is that in some cases, multi-cell culverts can also meet the definition of a bridge. However, every site condition is unique and there can be cases where this distinction cannot be very express. But in specific terms, culverts are smaller structures with peculiar features when compared with bridges which are more elaborate structures.

The traditional definition of culvert has been based on span length instead of function.

It will be interesting to look at some of the distinctions between the components of bridges and culverts, especially for a water body crossing.

A typical bridge will consist of a bridge deck and abutment. There may or may not be intermediate piers depending on the span and the structural scheme adopted. The structural component of a bridge which interacts with the soil are the mainly the abutments and wing walls only. However for culverts, all parts of the culvert interacts with the surrounding soil, or in some cases, all parts will interact with the surrounding soil except the top slab. This is mainly because culverts are tunnel-like structures and are generally referred to as buried structures.

Deep foundations or special foundations are usually required for transferring the load from bridge decks to the soil, but the loads from box culverts are usually transferred to the surrounding soils without the need for additional special foundation. The bottom slab of culverts usually acts as the medium for conveying storm water and as the foundation as the same time. In essence, spread footings are usually very adequate for box culverts. Also, the friction between the side walls of a culvert and the surrounding soil offers some shaft resistance in supporting the buried structure, that is why a backfill material must be of very high quality. When a large volume of water is anticipated with considerably deep stream bed, box culverts cannot be an option.

Culverts receive less attention than bridges because they are buried structures, and when they are performing satisfactorily, they are easily forgotten. Furthermore, the failure of culverts is usually less disastrous and expensive than failure of bridges. However, failure of culverts crossing a road can pose life threatening and environmental hazards to human beings and animals.

Hydraulically, culverts are designed for peak flow with the consideration that the inlet is fully submerged. This is for proper performance and discharge of the flow but such considerations are not made for bridges. For bridges crossing a water body, the basic consideration will be to ensure that the deck doesn’t get submerged, or other considerations to ensure that boats, canoes, and floating debris can flow through freely without impacting the bridge deck. Data of the highest water level of the stream is usually very sufficient for this.

NEW!!! Thank you for reading. If you have some time, take our newly introduced free and mind refreshing quiz HERE.