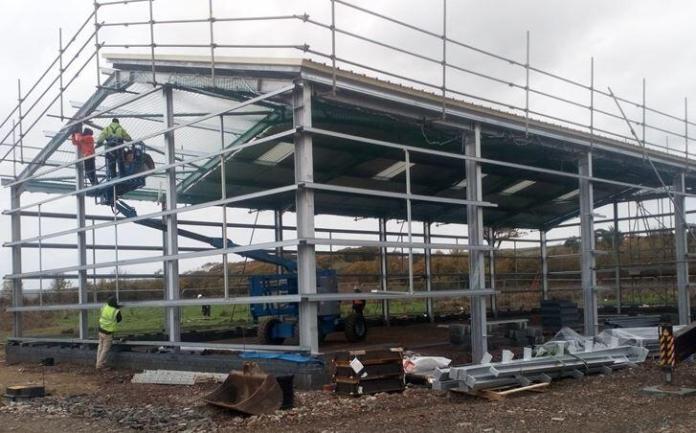 Normally, the following sequence and method of erection are followed;

Sequence for Erection of Steel Structures

Stage 1:
Before the steelwork erection commences, the sizes and exact locations of the holding-down bolts on the foundation and base plates are double-checked. Sometimes, discrepancies can occur due to errors from setting out thereby causing the erection timetable to be delayed. Following these checks, the following procedures are carried out:

Stage 2:
Install the central portion of each rafter. When trusses are to be used, the whole section may be erected in one piece after fabrication on the ground.
Connect the truss to the column ends with bolts to form the full structural frame.

Stage 3:
After final alignments and adjustments of the frame placements, install the vertical column bracing and roof bracings to make the entire structure stable.

Stage 4:
Use bolted connections to secure all roof purlins and sheeting rails to the framework.

Stage 6:
Install the overhead cranes on the crane girders where required.

Stage 7:
Install the roof and side panels.

Stage 8:
After the erection is complete, fill the undersides of the base plates with non-shrink grout.

Normal construction follows the erection sequence outlined above. After preparing an erection program, a special sequence should be followed in the case of special constructions.

Cranes and Mobile Elevating Work Platforms (MEWPs) are commonly used for the erection of steel structures, even though other methods may be utilized for steel bridge construction. Cranes are generally categorized into two categories: mobile and non-mobile. Truck-mounted cranes, crawler cranes, and all-terrain cranes fall into the first group, whereas tower cranes fall into the second.

The number of crane lifts required determines typical erection speeds and, as a result, the site programme of works. Pre-assembled units should be used to the maximum extent possible to reduce the number of crane lifts. If crane availability is an issue, steel decking, which can be installed by hand, is a better option than precast concrete units, which require a crane for individual placement. The designer can utilize a ‘piece count’ to estimate the number of lifts required and thus the erection time.

Lining, leveling, and plumbing involve collaboration between the site engineer, who uses a survey instrument, and the erection crew, who tightens and shimmies the last bolts. The erection gang persuades the frame to move to a position acceptable to the checking engineer by using wedges, jacks, pull-lifts, and proprietary pulling devices such as Tirfors, and then bolts it up firmly. Some misalignment is overcome, and some are produced, as a result of this process. If the latter is unfavorable, local adjustments are made.

Bolted Connections
Bolted connections are preferable to site welding because it is faster, less sensitive to bad weather, and have less access restrictions and inspection requirements.

Property class 4.6 and 8.8 non-preloaded bolts to BS EN 15048 are commonly used in 2 mm clearance holes in structural bolting operations (for buildings) in the UK. M20 8.8 completely threaded bolts, which are the recommended solution, are widely accessible. Bolts with property class 4.6 are typically used only for fixing lighter components like purlins or sheeting rails, when 12 mm or 16 mm bolts can be used instead.

Fully threaded bolts are commonly specified, implying that one bolt size can be used for a wide range of connections. It is advised that M20, 8.8 completely threaded bolts 60 mm long be used, as they can be used to make roughly 90% of basic connections. Preloaded bolts should only be utilized in situations where relative movement of linked parts (slip) is objectionable or if dynamic loading is a possibility.

It is best to avoid using different grade bolts of the same diameter on the same project. With non-preloaded bolts in typical clearance holes, washers are not required for strength. Bolts, nuts, and washers should be supplied with a corrosion-resistant coating that does not require further protection on-site when possible.

Welded Connections
If bolted connections can be made, site welding is usually avoided. When site welding is used, it is necessary to provide cover from bad weather as well as good access for both welding and inspection. Apart from the extra cost implications, providing such protection and access may have program consequences.

The final goal of the erection process is to hand over the frame in good working order to the subsequent trades. The crucial criterion here is the erected frame’s positional precision, which is dependent on an understanding of how a steel frame’s erected position is regulated.

A steel-framed structure is a massive structure made up of a huge number of relatively thin and flexible components. Plumb and line accuracies of about 1 part in 1000 are targeted for the completed construction, employing components that can be fabricated with greater variability than 1 part in 1000 separately. Deformations such as the flexure of the structure under the self-weight of steel also have an impact on its real position.

Tests performed upon handover of a built steel structure could be deemed final under an inspection and test plan. All tests must have the following information in order to be meaningful: