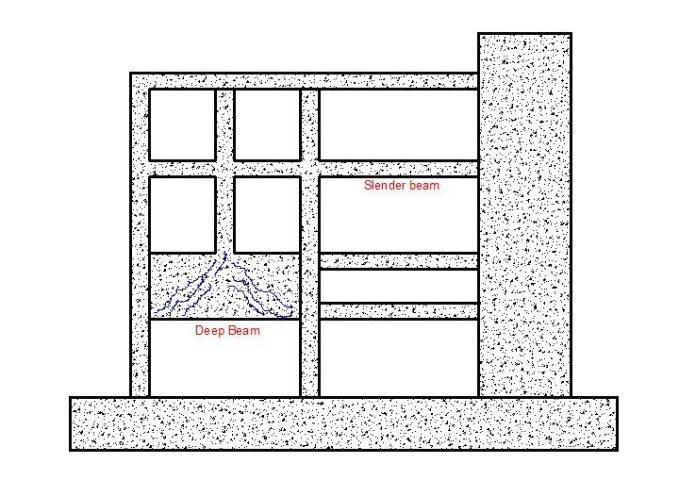 A deep beam is a beam with a depth that is comparable to the span length. As a result, deep beam theory is required for the design of such elements due to the shear warping of the cross-section and a combination of diagonal and flexural tension strains in the body of a deep beam. In BS 8110, the designer is directed to specialist literature for the design of beams with a clear span less than twice the effective depth. A deep beam is defined in Eurocode 2 (EN 1992-1-1:2004) as one whose effective span is less than three times its entire depth.

The fundamental principle underlying the design of slender beams is that stress distribution across the section is proportional to the distance from the bending’s neutral axis, i.e. plane sections of the cross-section of a beam perpendicular to its axis remain plane after the beam is bent. However, this notion only applies to deep beams to a limited extent, resulting in designs that are often not conservative.

By implication, when compared to pure bending, the strain distribution in deep beams is no longer regarded linear, and shear deformations become prominent. Many countries have included design rules for these aspects in their design regulations as a result of the knowledge that a deep beam behaves differently from a slender beam.

The structural behavior of a single-span deep beam after the concrete in tension has cracked is similar to that of a tied arch (Reynolds et al, 2008). The compression force at the centre of the arch rises from the support to a height at the crown equal to roughly half the beam’s span. Because the bending moment and the lever arm vary similarly along the length of the beam, the tension force in the tie is essentially constant along its length. The structural behavior of a continuous deep beam is similar to that of a separate tied arch system for each span, paired with a suspension system centered over each internal support.

For deep beam reinforcement and detailing, Eurocode 2 recommends using one of two design techniques. The first methodology is connected to the strut-and-tie model application and the second methodology is related to a linear elastic analysis using the finite element method.

Strut and Tie Modelling is an effective way of representing complex stress patterns as triangulated models. STM is based on the truss analogy concept and can be applied to numerous concrete structural parts. Essentially, strut-and-tie models (STM) are trusses consisting of struts, ties and nodes. It is commonly used to design non-standard concrete construction elements or parts of elements like pile caps, corbels, deep beams (depth > span/3), beams with holes, connections, and so on, where typical beam theory doesn’t always apply.

STM is a lower bound plastic theory, which implies it is safe as long as the following conditions are met:

The strut-and-tie model design method can be broken down into four stages:

Note: B (or beam or Bernoulli) regions in which plane sections remain plane and design is based on ‘normal’ beam theory. D (or discontinuity or disturbed) regions in which plane sections do not remain plane; so ‘normal’ beam theory may be considered inappropriate. D-regions arise as a result of discontinuities in loading or geometry and can be designed using STMs. Typical examples of D-regions include connections between beams and columns, corbels, openings in beams, deep beams and pile caps, etc.

For more information on strut and tie models, see ‘How to design concrete members using strut-and-tie models in accordance with Eurocode 2‘.

Bottle-shaped Strut and tie model
At ULS, a strut and tie model may be constructed to determine strut-and-tie forces: see Figure below. Here the UDLs top and bottom are resolved into two-point loads applied at ¼ spans at the top of the wall.

Choice
A fan-shaped stress field is appropriate for the ULS but not necessarily for the SLS where the lever arm can be determined from elastic analysis or alternatively in accordance with the recommendations of MC90. Designed reinforcement will not be required if the design bearing stress is less than σRdmax = 0.85υ’fcd: in that case the design loads will be safely transmitted to the supports through the fan-shaped stress field. Suspension reinforcement is required to transmit the bottom loading to the top of the beam. In addition, minimal horizontal reinforcement is required for crack control.