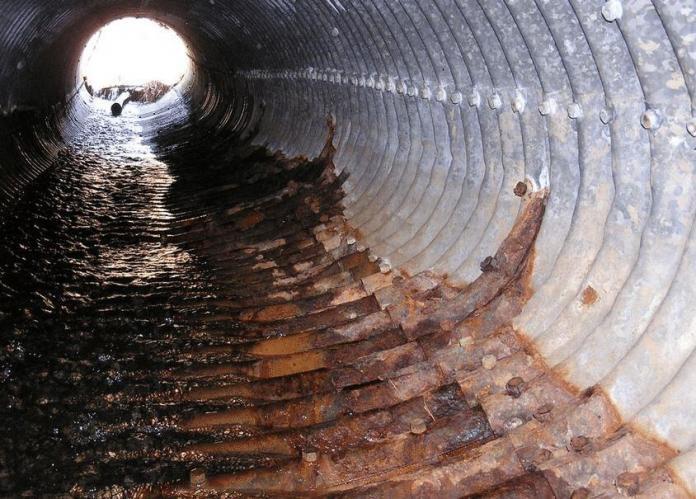 A high moisture content, good aeration, a high level of acidity, and a considerable number of soluble salts,  can make a soil become corrosive. Metal alloys may undergo a dealloying process in corrosive soils as a result of the hostile surroundings there. The combination of soil corrosivity and dealloying corrosion is to blame for the spread of corrosion in buried steel structures.

Corrugated metal pipes (CMPs) and corrugated metal culverts (CMCs) are subterranean steel structures that have been utilized in traffic networks and water supply systems in North America and Europe since the 1850s . Corrugated profiles are being used in pipelines and culverts in  order to help these structures interlock with the surrounding backfill soils and increase confinement properties as well as overall capacity. In cold coastal regions, salt used to melt the snow causes significant chloride deposits in the soil, which exposes buried corrugated steel structures to, resulting in the formation of thick rust layers.

Corrosion, which results from exposure to hostile conditions where chlorides attack metals with or without protective coatings, is the main reason why buried steel constructions deteriorate. Such deterioration is characterized by thickness loss and a decline in the axial and flexural stiffness of the steel. To avoid structural failure, it is necessary to reevaluate the structural capability and estimated service life. Around the years, soil corrosion has had an impact on several underground steel constructions all over the world (Ezzeldin et al., 2022).

Temperature variations, humidity, airborne sea salt, salts dissolved during snow thawing, and other chemical elements can all contribute to corrosive situations that cause steel to deteriorate over time. The risk of corrosion in buried steel structures is brought on by the very variable soil conditions in the area.

The corrosion process is accelerated by repeated daily and seasonal exposure to salt and water, particularly when there is an increase in temperature fluctuation in cold regions due to the effects of global warming. To monitor potential structural degradation and damage, regular in-service inspection of culvert performance is therefore essential.

The US Pipelines and Hazardous Material Safety Administration states that exterior corrosion is typically to blame for pipeline system ruptures brought on by corrosion. In addition to causing environmental issues, corrosion is a major element in the aging of networks and facilities, needing maintenance and rehabilitation that can put a large financial strain on the nation’s budget.

Recent research from the Department of Civil and Resource Engineering and the Department of Mechanical Engineering at Dalhousie University in Nova Scotia, Canada, studied the accelerated laboratory corrosion test on corrugated mild steel structures buried in cohesionless soils. The study utilized repeated wet/dry cycles to simulate the effects of chloride deposits on the buried steel structures. The findings of the study were published in the journal, Case Studies in Construction Materials.

For the purpose of simulating the effects of chloride deposits on corrugated mild steel structures buried in cohesionless soil, the researchers (Ezzeldin et al., 2022) devised an accelerated laboratory corrosion test using multiple wet/dry cycles. The test was initiated by applying a 3.5% NaCl electrolyte solution to cohesionless soil above buried corrugated steel coupons, which were then subjected to repeated wet/dry cycles.

The study also examined the structural profile geometry’s loss of thickness and the degree to which the steel’s tensile strength, ductility, and hardness had been degraded. This investigation focused on the deterioration of mild steel coupons as a result of corrosion. Both micrometer gauge measurements and the weight loss method were used to calculate the corrosion damage.

Corrugated mild carbon steel (CS) type B coupons were used for the tests. The coupons had a corrugation depth of 13 mm, a wavelength of 68 mm, and a thickness of 1.5 mm. Each coupon’s total projection dimensions were 110 mm by 110 mm in order to accommodate multiple waves, one crest and two valleys at the surface facing the dirt. The interface geometry of buried CMPs and CMCs was simulated by the corrugated specimens.

Each coupon was buried beneath a layer of finely graded, well-compacted, cohesionless dirt. The system included two timers to regulate the wetting (spraying) and drying stages, a tank of distilled deionized water, a pump to transfer water from the tank, stainless steel pipes and fittings to carry the water from the tank to an oven, a convection oven to distribute heat evenly to the coupons during the drying stages, and other components.

Two programmed timers were used to regulate the timing for each stage while the wet/dry cycles were repeated. The process of soaking (spraying) took 4 seconds. The soil above each coupon was sprayed with the distilled water as it was transferred by the pump from the tank. To provide dissolved oxygen and keep the water at normal temperature, the tank containing the distilled water was left open to the atmosphere. The heat from the oven was then used to finish the drying process. The soil temperature rose gradually during the drying stage, reaching a nearly dry state (i.e., a recorded soil temperature of about 90 ℃) in about 60 minutes.

Each full wet/dry cycle took about 60 minutes to complete because the spraying was done right away at the start of the cycle. When the soil was sprayed during the wetting stage, the temperature abruptly dropped from around 90℃ to about 60 ℃, a drop of about 30 degrees. Prior to the start of the following wetting stage, the temperature was raised once again during the ensuing drying stage in order to evaporate the majority of the remaining water.

To keep the salt content in the soil at the same level (i.e., 3.5 percent) during subsequent wetting procedures, which were carried out using just distilled water, the electrolyte solution was added just once, using the same quantity of distilled water as utilized for each wetting stage.

Gravity caused the salts to settle onto the steel coupons as a result of the repeated wetting process used to completely saturate the soil throughout each cycle. In order to provide aeration and break up salt crusts that had collected, a spatula was used to mix only the top layer of soil and then compact it on top of each coupon after every 20 wet/dry cycles.

In order to reduce any potential impact on corrosion propagation, the soil adhering to the metal surface’s interface was kept undisturbed by the researchers. To assess the spread of corrosion caused by each set of cycles, five coupons were evaluated with varying totals of wet/dry cycles (50, 100, 200, 400, and 800 cycles).

Findings from the Study

At the end of the experiment by Ezzeldin et al (2022), the following conclusions were made;

A mathematical model, requiring the measurement of four physicochemical parameters at the interface between the soil and the mild steel surface, was used by the researchers to provide an approximate prediction of the depth of corrosion damage in buried steel structures. The present study suggests employing this mathematical model to make approximate predictions of corrosion damage over time, based on the following Eqs. (1,2):

The corrosion damage and reduction in nominal thickness (%) related to number of cycles from the accelerated wet/dry test and number of years from the mathematical model is shown in the Table below;

The contents of the cited original article published by Case Studies in Construction Materials (Elsevier) is open access, under the CC BY license (http://creativecommons.org/licenses/by/4.0/) which allows you to share and adapt (remix) the article provided the appropriate credit is given, and the link to this license provided.