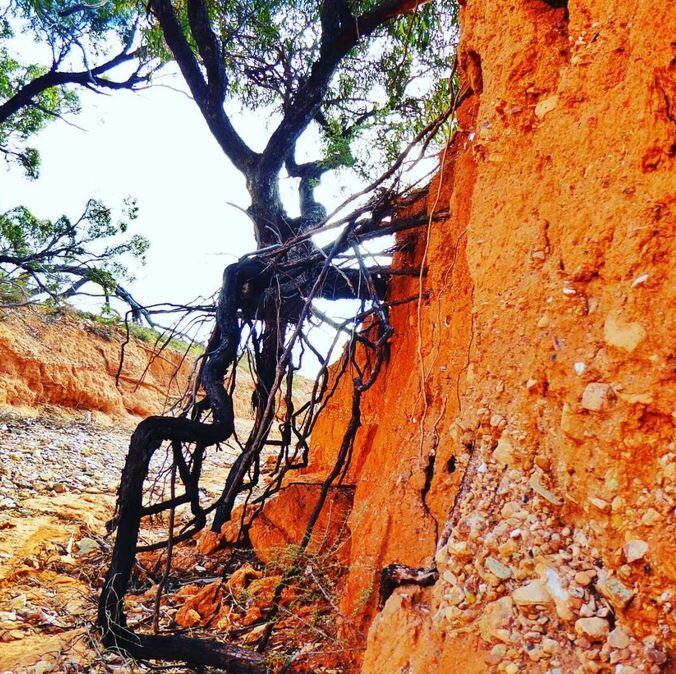 When the repulsive forces between clay particles in soils are greater than the attractive forces, deflocculation results, causing the particles to resist one another and form colloidal suspensions in the presence of relatively pure water. Such soils are known as dispersive soils. In terms of erosion control, there is a specific threshold velocity below which running water does not erode non-dispersive soil. Only water flowing with a specific amount of erosive energy can separate the individual particles, which otherwise stick to one another.

Contrarily, dispersive soil does not have a threshold velocity because the colloidal clay particles remain suspended even in still water, making these soils extremely prone to erosion and piping. Except for the possibility that soils with less than 10% clay particles may not have enough colloids to sustain dispersive pipes, there are no notable differences between the clay fractions of dispersive and non-dispersive soils. Dispersive soils have a moderate to high clay material concentration.

In comparison to regular soils, dispersive soils have a higher concentration of dissolved salt (up to 12%) in their pore water. Clay particles occur as aggregates and coatings around silt and sand particles in soils with high salt levels, and the soil is flocculated as a result.

with units expressed in meq/litre of the saturated extract.

The exchangeable ions in the layers of adsorbed clay particles are correlated with the electrolyte concentration of the pore water. The type of clay minerals present may have an impact on this relationship in addition to the pH value. As a result, it is not always constant. An SAR value greater than 10 was regarded indicative of dispersive soils by Gerber and Harmse (1987), between 6 and 10 was considered moderate, and less than 6 was considered non-dispersive.

where the units are expressed as meq/100 g of dried clay.

Elges (1985) suggested a 10% ESP cutoff point over which soils that have their free salts leached by seepage of reasonably pure water are susceptible to dispersion. ESP values exceeding 15% indicate very dispersive soils (Bell and Maud, 1994). At ESP values of 6% or below, it was discovered that those with low cation exchange values (15 meq/100 g of clay) were absolutely non-dispersive. Similar to this, soils with high cation exchange capacity numbers and a plasticity index higher than 35% swell to the point where dispersion is negligible.

Regrettably, standard soil mechanics testing cannot distinguish between dispersive and non-dispersive soils. No single test can be relied on totally to detect dispersive soils, despite the fact that several specialized tests have been employed to identify them (Bell and Maud, 1994).

Physical and chemical testing can be used to categorize them. The former includes the pinhole test, the modified hydrometer or turbidity ratio test, the dispersion or double hydrometer test, and the crumb test. Craft and Acciardi (1984) discovered that the pinhole and crumb tests occasionally produced contradictory findings from the same soil samples.

Then, Gerber and Harmse (1987) demonstrated that when free salts were present in solution in the pore water, as is frequently the case with sodium-saturated soils, the crumb test, the double hydrometer test, and the pinhole test were unable to identify dispersive soils.

Dispersive soils have been employed in the construction of earth dams, resulting in serious piping damage to embankments (Bell and Maud, 1994). After a rainstorm, deep gullies caused by severe erosion damage can develop on earthen embankments. Small leaks of muddy-colored water from an earth dam after the reservoir has been initially filled are signs of pipework.

There is a risk that the dam will fall as a result of the rapidly expanding pipes. Dispersive erosion can be brought on by initial seepage through an earth dam in regions with higher soil permeability, particularly in places where compaction may not be as effective, such as near conduits, up against concrete structures, and at the foundation interface; or by desiccation cracks, differential settlement cracks, or cracks brought on by hydraulic fracturing.

There is often no other viable option economically in many locations where dispersive soils are present but to employ these soils to build earth dams. Experience suggests that an earth dam should be sufficiently safe even if it is constructed with dispersive soils provided there is thorough construction control and includes filters.

According to Vacher et al. (2004), dispersive soils, which typically contain more than 6.0% exchangeable sodium, are where tunnel erosion mostly occurs (ESP). In the past, these soils may have been referred to as solodic, solonetz, or solodized – solonetz (Doyle and Habraken, 1993). These soils are known as sodic soils or Sodosols (Isbell, 2002). Sodic or dispersive soil layers may also be present in other soil types, including Vertosols, Kurosols, and Kandosols.

Small aggregates appear to “dissolve” into a milky ring or halo when they are placed in a dish of distilled water. The clay platelets that were ejected from the clay aggregate are what make up this milky ring. Dispersed platelets are frequently so tiny that they are perpetually suspended, which explains why dams made of dispersive clays never settle and consistently have a “muddy” or “milky” appearance.

Even while sodic soils tend to scatter, it’s crucial to recognize that not all sodic soils do, and not all dispersive soils are sodic (Sumner, 1993). While organic matter, clay mineralogy, acidity, and high iron content may inhibit sodic soils (ESP > 6%) from dispersing, factors like silt and high magnesium content may encourage non-sodic soils (ESP 6%) to do so (Raine and Loch, 2003; Rengasamy, 2002).

Despite possessing less than 6.0% ESP, degraded kurosols in southern Tasmania are known to be dispersive. In addition, until the salt is leached from the soil profile, usually after subsurface drainage, saline soils that are also sodic do not scatter or behave like sodic soils (Rengasamy and Olsson, 1991).

Sodic soils swell but typically don’t disperse in water that is moderately electrolyte (salty) concentrated or somewhat saline. Clay platelets are not broken. Salts in the soil water lower the osmotic gradient between the clay platelets’ outside and inside, preventing the last stage of swelling that would otherwise lead to dispersion (Nelson, 2000). One of the most crucial defenses against gully erosion and soil erosion that sodic soils have is the maintenance of salts in the soil water.