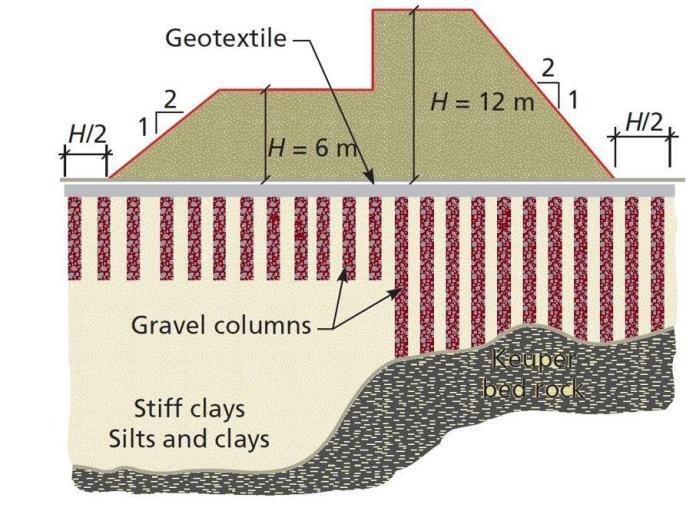 Stone columns are vertically positioned piles of compacted, gravel-sized stone particles used to enhance the performance of soft or loose soils. The stone can be compacted using impact techniques, such as vibroflots, impact compactors, falling weights, and so on. The technique is used to increase bearing capacity (up to 5 to 10 ksf or 240 to 480 kPa), decrease foundation settlements, improve slope stability, reduce seismic subsidence, reduce lateral spreading and liquefaction potential, allow construction on loose/soft fills, and prevent sinkholes from pre-collapsing in karst regions.

A stone column’s performance is greatly influenced by its diameter. Greater strengths are more likely in larger columns, which is linked to a higher area replacement ratio. The in-situ soft soil is typically partially replaced, resulting in a denser ground that is further improved by adding more fill material.

The moisture content of the nearby base soil also has an impact on the connection between the imported material and the in-situ soil. Since the confinement pressure of the surrounding soil is what generally causes stone columns to function, it is obvious that reduced confinement forces (resulting from wetter soils) will have an effect on the column strength.

The performance of soils is enhanced by stone columns in two ways: first, by densifying the surrounding granular soil, and second, by reinforcing the soil with a stiffer, higher shear strength column. Table 1 displays the anticipated improvement for various soil types. In most cases, it doesn’t matter how deep the groundwater is.

In general, stone columns can be utilized to enhance the ground when lightweight constructions are built on poor soils. The installation of these columns might be done with the hard stratum in contact or floating above it. Extending it to the hard stratum is preferred. By using this installation method, there is no chance of columns punching through the soil. As a result, differential settlement is greatly reduced. A few test investigations of stone columns that were extended to the hard stratum revealed that the tested columns only bulged in the upper third of the column, thus demonstrating their appropriate load-bearing capability.

Rammed stone columns may be used to support light weights in the following situations, depending on the common local applications requiring improvement of the ground conditions for construction purposes: strip footings, houses (up to two stories), embankment support, storage tanks like oil tanks, and slope stability. Due to the high permeability of crushed aggregates, which promotes faster drainage, the technique would be of utmost importance in soft soils that are heavily saturated.

The procedure of Stone Column Installation

Typically, the flushing water is sent to a settlement pond where it is permitted for the soil fines suspended in the water to settle. When using the dry bottom feed process, the vibroflot only needs its weight and vibrations to help it enter the earth. Predrilling may once more be performed if required or preferred. The subsequent steps are then similar, with the exception that the stone is sent through the tremie pipe to the tip of the vibroflot. It has been possible to treat at depths of up to 100 feet (30 meters).

In general, two mechanical techniques—vibration and ramming—are used to install these columns. Rammed columns are placed by first generating a pre-bored hole which is afterwards filled with a compacted material in many layers as opposed to vibrated columns which employ a vibratory probe to generate an opening for granular fill placement by either the displacement or the replacement method.

The difficulty of the installation is what distinguishes the two methods. Vibrated columns are more expensive than rammed columns because they require more advanced equipment and experienced labour. Figure 1 depicts how a typical rammed stone column is installed.

The setup and equipment utilized when jetting water is used to advance the vibroflot are similar to VC. For a given project, the dry bottom feed method can be employed if water jetting is not desired. Stone is fed to the vibroflot’s tip through a tremie pipe that is affixed to the side of the vibroflot. A front-end loader fills a stone skip with stone on the ground, and a different cable lowers the skip to a chamber at the top of the tremie pipe.

Vibro piers are an application in particular. Short, tightly spaced stone columns are used in the procedure to form a strong block that will boost bearing capacity and lower settlement to acceptable levels. In cohesive soils where a predrill hole may be dug to its maximum depth and remain open, vibro piers are often built. The stone is rammed and vibroflotted into 1 to 2 foot (0.4 to 0.8 m) lifts before being compacted.

Although natural gravels and pebbles have been utilized, the stone is often a hard rock that has been graded and crushed. The modulus and shear strength of the column increase with the stone’s friction angle.

Stone columns have several advantages for liquefaction analysis, including densification of nearby granular soils, a decrease in cyclic stress in the soil due to the presence of stronger stone columns, and drainage of the excess pore pressure. In liquefaction applications, the treatment typically extends laterally outside the sections to be protected and covers the whole footprint of the structure, which is equal to two-thirds of the thickness of the liquefiable zone. This is required to prevent the treated region beneath the foundation from being negatively impacted by the nearby untreated soils.

Location, depth, ammeter increments, and the quantity of stone backfill utilized are crucial construction factors to track and record. To gauge the improvement made in granular soils, post-treatment penetration tests can be done. With test footings as large as 10 feet square (3.1 meters) and loaded to 150% of the design load, full-scale load testing are increasingly prevalent.