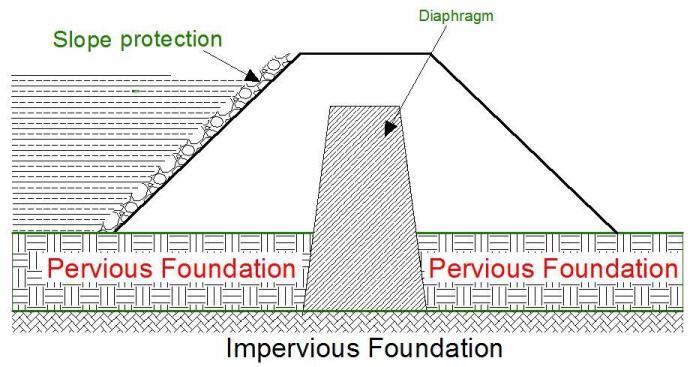 Dams are structures that are constructed to impound a water body such as a stream or a river. The upstream (reservoir) of a dam is crucial for water storage which can be used for irrigation, municipal water supply, hydropower generation, flood control, fishing, and recreation. There are different types of dams such as earth dams, gravity dams, arch dams, etc.

Earth dams are dams that are constructed using natural materials such as natural soils, rocks, clays, and gravel. It is the most ancient type of embankment and can be constructed using familiar processes and primitive equipment. Unlike gravity and arch dams which require a sound foundation and more complex construction materials and methods, earth dams can be founded on natural soils. However, they are more susceptible to failure when compared with other types of dams.

There are three popular types of earth dams and they are;

This is the simplest type of earth dam. It is constructed using a single material (same type of soil) and hence can be considered to be homogeneous throughout. To aid water tightness and stability, a blanket of relatively impervious material may be placed on the upstream face. This type of embankment is attractive when only one type of material is economically or locally available. However, this type of earth dam is more suitable for low to moderately high dams and for levees. Large dams are seldom designed as homogeneous embankments.

Seepage can be a major problem of purely homogenous earth dams. As a result, huge sections are usually required to make it safe against piping, stability, etc. To overcome this problem, it is usually very typical to add an internal drainage system such as a horizontal drainage filter, rock toe, etc. The internal drainage system keeps the phreatic line (i.e. top seepage line) well within the body of the dam, and steeper slopes and thus, smaller sections can be used, the internal drainage is, therefore, always provided in almost all types of embankments.

Zoned embankments are usually provided with a central impervious core, covered by a comparatively pervious transition zone, which is finally surrounded by a much more pervious outer zone. The central core checks the seepage. The transition zone prevents piping through cracks which may develop in the core. The outer zone gives stability to the central impervious fill and also distributes the load over a large area of foundations.

This type of embankment is widely constructed and the materials of the zones are selected depending upon their availabilities. Compacted clay can be used for the central impervious core. The clay material should be carefully selected and should have a coefficient of permeability of less than 1 x 10-9 m/s irrespective of the compaction energy applied. Furthermore, in order to avoid desiccation-induced shrinkage cracks, the volumetric shrinkage should not exceed 4% and the unconfined compression strength (UCS) should exceed 200 kN/m2.

Freely draining materials, such as coarse sands and gravels, are used in the outer shell. Transition filters are provided between the inner zone. This type of transition filter is always provided, whenever there is an abrupt change of permeability from one zone to the other.

Diaphragm type embankment earth dam has a thin impervious core, which is surrounded by earth or rock fill. The impervious core, called the diaphragm, is made of impervious soils, steel, timber, concrete, or any other materials. It acts as a water barrier to prevent seepage through the dam.

The diaphragm may be placed either at the center as a central vertical core or at the upstream face as a blanket. The diaphragm must also be tied to the bedrock or to a very impervious foundation material. This is to avoid excessive under-seepage through the foundation.

There are two methods of constructing earthen dams:

In this method of construction, the dam body is constructed by excavating and transporting soils by using water. Pipers called flumes, are laid along the outer edge of the embankment. The soil materials are mixed with water and pumped into these flumes. The slush discharged through the outlets in the flumes at suitable intervals along their lengths. The slush, flowing towards the centre of the bank, tends to settle down. The coarser particles get deposited soon after the discharge near the outer edge, while the fines get carried and settle at the centre, forming a zoned embankment having a relatively impervious central core.

Since the fill is saturated when placed, high pore pressures develop in the core materials, and the stability of the dam must be checked for these pressures. This type of embankment is susceptible to settlement over a long period, because of slow drainage from the core. Hydraulic-fill method is, therefore, seldom adopted these days, Rolled-fill method for constructing earthen dams is, therefore, generally and universally adopted in these modern days.

The embankment is constructed by placing suitable soil materials in thin layers (15 to 30 cm) and compacting them with rollers. The soil is brought to the site from burrow pits and spread by bulldozers, etc. in layers. These layers are thoroughly compacted by rollers of designed weights. Ordinary road rollers can be used for low embankments (such as for levees or bunds); while power-operated rollers are to be used for dams. The moisture content of the soil fill must be properly controlled. The best compaction can be obtained at a moisture content somewhere near the optimum moisture content.

Earth dams are less rigid and hence more susceptible to failure. Every past failure of such a dam has contributed to an increase in the knowledge of the earth dam designers. Earthen dams may fail, like other engineering structures, due to improper designs, faulty constructions, lack of maintenance, etc. the various causes leading to the failure of earth dams can be grouped into the following three classes.

These causes are describes below in details:

Controlled seepage or limited uniform seepage is normal in all earth dams, and ordinarily it does not produce any harm. However, uncontrolled or concentrated seepage through the dam body or through its foundation may lead to piping or sloughing and the subsequent failure of the dam. Piping is the progressive erosion and subsequent removal of the soil grains from within the body of the dam or the foundation of the dam. Sloughing is the progressive removal of soil from the wet downstream face. More than 1/3rd of the earth dams have failed because of these reasons.