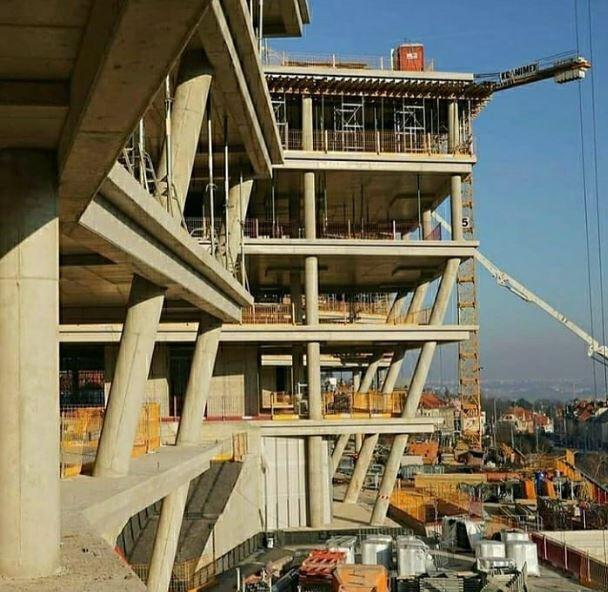 Inclined or slanted columns are columns that are leaning at an angle away from perfect verticality (90 degrees to the horizontal). This is usually intentional and not due to imperfection from materials or construction. The degree of inclination can vary depending on the designer’s intentions. In this article, we are going to review the analysis and design of inclined columns using standard design codes.

When a column in a structure is perfectly straight, first-order bending moment and other internal stresses are induced due to the externally applied loads. However, when a column is inclined at an angle to the beams or floor that it is supporting, changes in bending moments are observed due to the eccentricity of the axial load with respect to the longitudinal axis column. Such effects can be investigated for pinned supports or fixed supports.

In the design of inclined columns (say in reinforced concrete or steel), it is usually very sufficient to analyse the structure and obtain the design internal forces (bending moment, shear, and axial force) using first-order linear analysis. However, when required, the analysis can be extended to second-order non-linear analysis to account for secondary effects which may affect the stability of the column.

To verify the effect of inclination on the design of columns, let us investigate the following cases of a column with a fixed base in reinforced-concrete construction.

When the frames were analysed using first-order linear analysis, the following results were obtained;