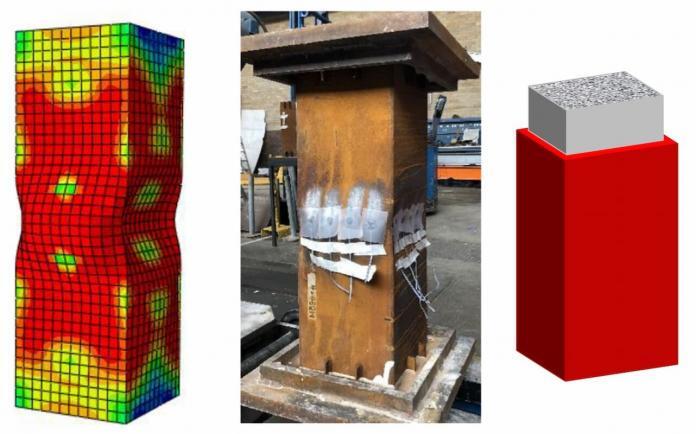 In terms of structural performance and constructability, concrete-filled steel tubular (CFST) members provide a number of advantages over bare steel or reinforced concrete elements. These advantages have led to a wider range of practical applications, such as increased strength and ductility of the core concrete due to the steel tube’s confining effect, increased resistance to local buckling of the steel tube due to the core concrete’s restriction of inward deformations, improved fire resistance of CFST members due to the concrete’s heat sink effect, and improved constructability due to the steel tube acting as formwork during the concrete pouring.

Torsion occurs in structural members as a result of twisting due to an applied torque. CFST beams with curved on-plan surfaces, CFST corner columns of structures that twist under wind or earthquake loads, and I-beams with CFST compression flanges that experience lateral torsional buckling are common instances where such actions might occur in CFST members.

Furthermore, because the stiffness centre and the mass centre of these structures do not lie in the same location, in reality, the piers of curved bridges, skew bridges, and complicated building structures are always exposed to torsion under horizontal earthquake action.

It is well known that the shape of the cross-section affects the confinement effect in CFST members and that square CFST columns typically possess somewhat lower strength and ductility than similar circular CFST columns. Square CFST columns, however, are frequently used for practical reasons, such as more elaborate beam-to-column connections.

Numerous researchers have conducted experimental and numerical studies on the behaviour of square CFST members under various loading conditions. These include a number of tests on square CFST beam-columns that were loaded under pure compression to bending. Additionally, experimental tests have been conducted on square CFST beam-columns utilizing high-strength steel sections with yield strengths up to 750 MPa, along with computational calculations.  Interaction formulae for design purposes have been developed on the basis of the findings.

The accuracy of the obtained formula was then evaluated using current theoretical findings, test data, and the finite element simulations carried out in the study. Finally, the significance of the theoretical formulation’s constituent parts is examined, and a simplified design formula was provided.

Basic Assumptions in the Determination of Torsional Rigidity

When determining the torsional rigidity of square CFST sections, the following fundamental presumptions are made:

(3) Pure torque is applied to the square CFST component, which results in no restrictions on any variations in the longitudinal warping and does not vary along the length of the member.

The notations used in the study are as follows:
Es, Gs, and μs are the steel cross-modulus sections of elasticity, shear modulus, and Poisson’s ratio, whereas Ec, Gc, and μc are the filled concrete’s modulus of elasticity, shear modulus, and Poisson’s ratio. The section depth and wall thickness of the steel tube are designated by D and t, respectively, while the length of the square CFST member is denoted by L.

Torsional deformation occurs when a member is subjected to a torsional moment (T), where θ(z) is the angle at which the cross-section is twisted. For a member of length L, the angle of twist at the tip, or tip rotation, is given by:

where (GJ)k is the torsional rigidity of CFST cross-sections, considering the contributions of both the concrete core and the steel tube, to be determined in this study.

In the study, the strain energy of the concrete core and the steel tube was determined as;

where (GJ)k,SE is the uniform torsional rigidity derived from the principle of minimum strain energy of a square CFST cross-section, which can be expressed as follows:

Where;
Ψ is the non-dimensional constant of uniform torsional rigidity of square CFST sections, m = Gs/Gc is the ratio of the shear modulus of steel to that of concrete, α = As/Ac, referred to as the steel ratio, is the ratio of the cross-sectional area of the steel As to the cross-sectional area of the concrete Ac, and can be approximated as α ≈ 4t/D.

When the steel ratio α = 0, the equation (3) reduces to the uniform torsional rigidity of a square section of a single material (pure concrete), i.e.

The exact solution, as given by Timoshenko and Goodier (1970), is:

It can be seen that the difference between the analytical solution and the exact solution is only 0.1%. This shows that the longitudinal displacement mode assumed in the paper is reasonable, and that the principle of minimum strain energy has been suitably applied.

The outcomes of a torsion test performed by prior researchers on a square CFST member were taken into consideration in order to further confirm the accuracy of the derived uniform torsional rigidity. The tested member’s geometrical and material characteristics are shown in the Table below where fy is the steel’s yield strength, fcu and fck are concrete’s cube and cylinder strengths.

The calculated rigidity of the member, as determined from Eq. (3), is also plotted in Fig. 3(a) (with G = E/[2(1 + μ)] and μc = 0.2 for concrete and μs = 0.3 for steel) and can be seen to be in good agreement with the test result in the elastic range (i.e. up to about T = 40 kNm for the case shown). Similarly, good predictions of torsional rigidity (within about 12%) were achieved following comparisons with the experimental results reported in (Kitada and Nakai, 1991), as shown in Fig. 3(b), the key properties of which are provided in Table 1 above.

Additionally, the authors used finite element modelling to confirm the derived uniform torsional rigidity found in Eq. (3). Using SOLID65 and SHELL181 elements, respectively, for the core concrete and steel tube and concrete, a series of square CFST members were modelled in ANSYS software. Following a convergence study, an element size of 20 mm in all directions was chosen. To model the contact between the steel and the concrete, the contact elements TAGRE170 and CONTAL173 were employed.

The results, along with the forecasts’ mean and standard deviation, are given in the Table below. The results show that the theoretical tip rotations and the finite element tip rotations correspond quite closely, with the largest absolute difference being less than 0.5%.

The relationship between Ψ and m for various steel ratios was displayed on a graph, and the following was noted:

(1) As α changes, the trend of the Ψ -m relationship remains similar, indicating that the relationship between Ψ and α is approximately linear
(2) As m increases, Ψ decreases.

The Ψ -α relationship for different values of m showed that:

(1) As m changes, the trend of the Ψ -α relationship also remains similar indicating that the relationship between Ψ and m is approximately linear
(2) As α increases, Ψ also increases.

Overall, it may be concluded that Ψ varies approximately linearly with both α and m, and that the influence of the steel ratio α is more significant.

The principle of superposition may be used now that it has been established that the relationships between ψ and both m and α are roughly linear. Consequently, the uniform torsional rigidity of a square CFST section can also be written as:

The contents of the cited original article published by Cement and Concrete Research (Elsevier) is open access, under the CC BY license (http://creativecommons.org/licenses/by/4.0/) which allows you to share and adapt (remix) the article provided the appropriate credit is given, and the link to this license provided.