Introduction
In the Eurocodes, traffic load models were calibrated for highway bridges having carriageway width less than 42m, and span length up to 200m. The load models aim to reproduce the the real values of the effects induced in the bridges by real traffic. Therefore, these models are artificial models and not necessarily real vehicles.

Calibration of the traffic models was based on real traffic data recorded in experiments performed in Europe between 1980 and 1994.

European Bridge Load Models
– Load Model 1 (LM 1): This load model reproduces traffic loads to be used for local and global verifications. It is made up of concentrated load and UDL, which can be thought of in terms of HA load of BS 5900, even though they are very different.

– Load Model 3 (LM 3): This is for special vehicles, and it is to be considered on request. It represents abnormal vehicles.

Analysis of influence lines for beams with overhangs

The subdivision of roads into notional lanes is summarised in the table below;

Load Model 1
Load Model 1 represents the effects of normal traffic and comprises of tandem axles (TS) superimposed over a uniformly distributed load (UDL) which its intensity remains constant with the loaded length. The model is very different from Type HA loading given in BD37. Type HA loading consists of a uniformly distributed load, the intensity which varies with the loaded length, and a constant Knife Edge Load (KEL) of 120 KN. There are also lane factors for different lengths which account for simultaneity of loading in adjacent lanes as a function of loaded length. Eurocode (EN 1991-2) load model also differs with BD37 in the way that the carriageway is divided into notional lanes. In EN 1991-2, the notional lane width is constant at 3.0m except for a small range of carriageway width between 5.4m and 6.0m when the lane width varies from 2.7m to 3.0m. (See Table above). 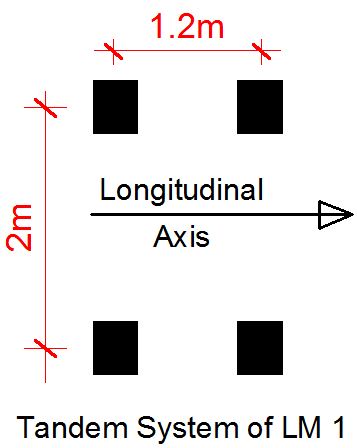 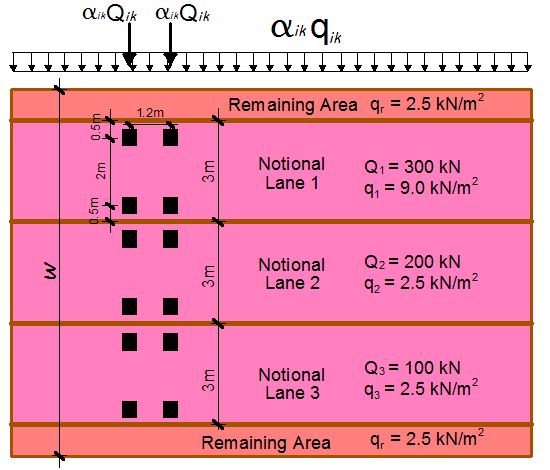 The characteristic values of LM 1 forces;

1.      In each notional lane, only one tandem system should be considered, situated in the most unfavourable position.
2.  The tandem system should be considered travelling in the longitudinal axis of the bridge.
3.      When present, the tandem system should be considered in full i.e with all its four wheels
4.      The UDL’s are applied longitudinally and transversally on the unfavourable parts of the influence surface.
5.      The two load systems can insist on the same area.
6.      The dynamic impact factor is included in the two load systems.
7.      When static verification is governed by combination of local and global effects, the same load arrangement should be considered for calculation of local and global effects.
Credit:
Some information on this post has been culled from;
Pietro Croce et al (2010): Guidebook 2 Design of Bridges; Published by Czech Technical University in Prague, Klokner Institute. ISBN 978-80-01-04617-3
Thank you for visiting Structville today….
Have you also read…

Free MATLAB Code for Flexural Design of RC Sections
Our amazing Facebook interactive page can be found at;
www.facebook.com/structville