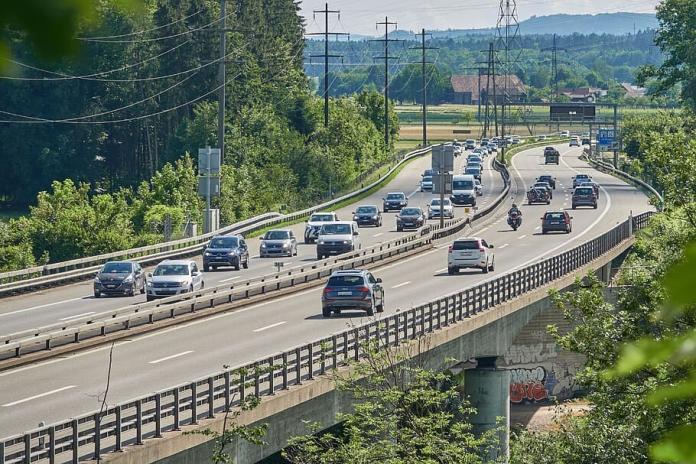 Highway bridges are subjected to a myriad of direct and indirect forces. For the purpose of obtaining the action effects on bridges, bridge designers must obtain the adequate load combination for highway bridges that will give the worst effect on any part of the bridge. The predominant action on highway bridges is gravity loads due to self-weight and the mass/dynamic effects of moving traffic. Other actions that are frequently considered are temperature loads, construction loads, snow loads, earthquake loads, and possible differential settlement of the foundation.

Load Combinations for Highway Bridges in the UK

In the UK, five combinations of loading are considered for the purposes of design: three principal and two secondary. These are defined in Clause 4.4 and Table 1 of BD 37/01. It is usual in practice to design for Combination 1 and to check other combinations if necessary.

Combination 2. For all bridges, the loads to be considered are the loads in combination 1, together with those due to wind and, where erection is being considered, temporary erection loads.

Combination 3. For all bridges, the loads to be considered are the loads in combination 1, together with those arising from restraint due to the effects of temperature range and difference, and, where erection is being considered, temporary erection loads.

Combination 5. For all bridges, the loads to be considered are the permanent loads, together with the loads due to friction at bearings.

The partial factors for load (γFl) when carrying out load combination are provided in the Tables below;

The partial factors for highway live load combination are shown in Table 3 below;

The partial factors for wind load (on bridges) combination are shown in Table 4;

The partial factors for combination involving temperature loads are given in Table 5;

Annex A2 to EN 1990:2002 specifies the rules and methods for establishing combinations of actions for serviceability and ultimate limit state verifications (except fatigue verifications), as well as the recommended design values for permanent, variable, and accidental actions and ψ factors to be used in the design of road, footbridge, and railway bridges. It also applies to actions during the execution of bridges.

The effects of actions that cannot occur concurrently owing to physical or functional reasons are not required to be included jointly in combinations of actions, according to Annex 2 of EN 1990. Combinations including activities not covered by EN 1991 (for example, mining subsidence, specific wind impacts, water, floating debris, flooding, mudslides, avalanches, fire, and ice pressure) should be characterized in accordance with EN 1990, 1.1. (3).

The combinations of actions given in expressions 6.9a to 6.12b of EN 1990 should be used when verifying ultimate limit states. Expressions 6.9a is as given below;

Snow loads and wind actions do not have to be considered at the same time as construction-related loads Qco (i.e. loads due to working personnel). During some temporary design circumstances, however, it may be required to agree on the requirements for snow loads and wind actions to be taken into account simultaneously with other construction loads (e.g., actions due to heavy equipment or cranes) for a specific project.

If the impacts of uneven settlements are regarded as considerable in comparison to the effects of direct interventions, they should be evaluated. Total and differential settlement restrictions may be specified by the specific project. Uncertainty in the assessment of these settlements should be taken into account where the structure is extremely sensitive to uneven settlements.

Uneven settlements on the structure caused by soil subsidence should be defined as a permanent action and included in the structure’s ultimate and serviceability limit state verifications as a combination of actions. Gset should be represented as a set of values relating to differences in settlements between individual foundations or segments of foundations (relative to a reference level), dset,i (i is the number of the individual foundation or part of foundation).

Permanent loads and backfill are the main causes of settlements. For some individual projects, variable actions may need to be considered. Settlements change monotonically (in the same direction) throughout time and must be taken into account from the moment they cause structural impacts (i.e. after the structure or a part of it, becomes statically indeterminate).

Furthermore, there may be a connection between the development of settlements and the creep of concrete members in the case of a concrete structure or a structure with concrete elements. Individual foundation or pair of foundation settlement differences, dset,i, shall be taken into consideration as best-estimate projected values in line with EN 1997, taking into account the structure’s building process.

When the simultaneous presence of traffic and non-traffic actions is considerable, the characteristic values of the traffic actions can be calculated using the five separate, mutually exclusive groups of loads listed in Table 4.4a of BS EN 1991-2:2003 (reproduced below), with the dominant component action highlighted. Each load category in the table should be seen as establishing a characteristic action for usage with non-traffic loads, but they can also be used to assess infrequent and frequent values.

To obtain infrequent combination values it is sufficient to replace in Table 4.4(a) of EN 1991-2 characteristic values with the infrequent ones, leaving unchanged the others, while frequent combination values are obtained by replacing characteristic values with the frequent ones and setting to zero all the others. The ψ-factors for traffic loads on road bridges are reported in the Table below.

Partial Factors for Actions in the Limit State

γG,sup = 1.35 (This value covers the self-weight of structural and non-structural elements, ballast, soil, groundwater and free water, removable loads)
γG,inf = 1.00
γQ = 1.35 for road and pedestrian traffic actions, where unfavourable (0 where favourable)
γQ =1.45 for rail traffic actions, where unfavourable (0 where favourable)
γQ = 1.50 for all other variable actions for persistent design situations, where unfavourable (0 where favourable). This value covers variable horizontal earth pressure from groundwater, free water, and ballast, traffic load surcharge earth pressure, traffic aerodynamic actions, wind, and thermal actions, etc.
γP = recommended values defined in the relevant design Eurocode.
γGset (partial factor for settlement) = 1.20 in the case of linear elastic analysis, and γGset = 1.35 in the case of non-linear analysis, for design situations where actions due to uneven settlements may have unfavourable effects.
ξ = 0.85 (so that ξγG,sup = 0.85 x 1.35 = 1.15)