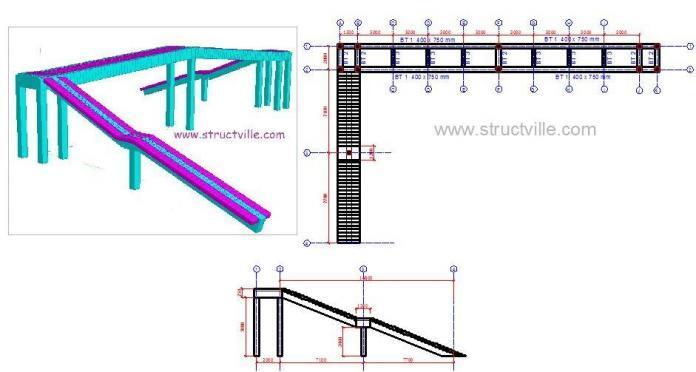 Pedestrian bridges (footbridges) are structures designed to enable human beings cross over obstacles such as busy highways, water bodies, gullies, etc. There are several variations of foot bridges based on structural configuration and materials. Modern footbridges are increasingly becoming elements of street beautification, with a view on sustainability and environmental friendliness. In this post, a simple pedestrian bridge has been modelled on Staad Pro software, and the result of internal stresses due to crowd load on the bridge presented.

Actions on Bridges
The actions on footbridges is explicitly covered in section 5 of EN 1991-2. The load models presented in the code and their representative values (which include dynamic amplification effects), should be used for ultimate and serviceability limit state static calculations. However, adhoc studies are required when vibration assessment based on specific dynamic analysis is necessary.

The effect of crowd action on a footbridge is represented by a uniformly distributed load which depends on the loaded length of the footbridge. However, when a road bridge is supporting a footway, a UDL value of 5.0 kN/m2 is recommended by the code for that section. This value is synonymous with continuous dense crowd action which is given by Load Model 4 of road bridges. However, when there is no such risk of dense crowd action, the load on the pedestrian bridge is given by;

For local assessment, a concentrated load of 10 kN is is considered to be acting on a square surface of sides 0.1 m. This load is not to be combined with other variable non-traffic load.

However, there are non-traffic actions that are possible on footbridges such as thermal action, wind action, snow action, indirect actions such as support settlement, etc. It is also important to consider accidental actions on the bridge especially vehicle collision on the substructure of the bridge.  For stiff piers, EN 1991-2:2003 recommends a minimum force of 1000 in the direction of vehicle travel or 500 kN in the perpendicular direction. These collision forces are supposed to act at 1.25 m above the level of the ground surface.

N/B: Vehicle collision on the piers is more common on footbridges than highway bridges. Therefore, it is highly recommended that the piers of the footbridge be protected using any reasonable and effective approach. Road restraint system can be installed at a distance from the piers. The deck should be high enough to prevent collision also.

Analysed Example
A pedestrian bridge with the following configuration is shown below;

With these dimensions shown above, the pedestrian bridge has been modelled on Staad Pro…
For the sake of clarity, the cross-sectional dimensions of the members are as follows;

The self weight of the structure will be calculated automatically by Staad Pro. The pedestrian crowd action has been calculated as;

The total force due to UDL on the bridge can be taken as 5 kN/m2 x 2m  x 27m = 270 kN
Therefore, an equivalent horizontal force that can be applied on the bridge deck is 27 kN

The images below show the internal stresses diagram due to crowd load;

The maximum moment at the intermediate supports of the main longitudinal beam due to characteristic crowd load is 62.7 kNm.

The other internal forces diagrams due to crowd load alone are shown below;

So we are going to stop here for now. Remember that you have to consider other load cases and combinations in order to arrive at the design moment.

The modelling, analysis, and drawings you see on this post was produced by Ubani Obinna for Structville Integrated Services. We are creative, we think critically, we research, and we solve problems. You can trust us with yours, so feel free to contact us.