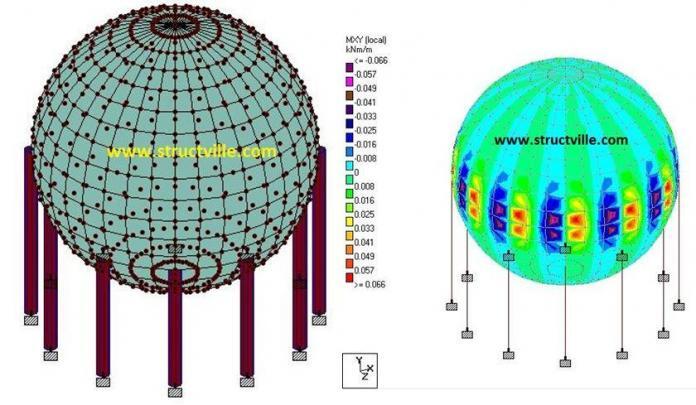 Spherical tanks (Horton Sphere) are used in several applications such as water storage, nuclear cooling, and storage of liquefied gases such as liquefied natural gas (LNG) and liquefied petroleum gas. One of the most common utilization of spherical vessels in the industry is pressurized gas storage because they can withstand higher internal pressure and have fewer size limitations than cylindrical pressure vessels. Horton Spheres usually contain pressurized gas inside the steel shell. The shell is supported by heavy steel columns which transmit the load to a reinforced concrete foundation.

Spherical tanks have high rigidity and durability. According to Khan (2015), the performance of a 200 m3 liquefied petroleum gas (LPG) tank with a wall thickness of 24 mm under 1.7 MPa pressure was evaluated after it had been in operation for three years. The result showed high resistance to micro cracking and shell deformation, with minimal wall thinning.

In this article, we are going to evaluate the potentials of Staad Pro software in the modeling and analysis of LPG sphere tanks. We are not going to deeply evaluate the design considerations for such structures but you should know that the tank shell should be able to withstand the vapour pressure from the liquefied petroleum gas.

This pressure is dependent on temperature and the design temperature is selected from the environment under consideration. For example, LPG gas cylinder pressure (LPG gas bottle pressure) is 0 kPa at -43ºC and goes up to 2482 kPa at 70ºC.

In this article, let us model and analyse an LPG sphere tank on Staad Pro with the following data;

When analysed on Staad Pro for a gas pressure of 1700 kPa, the following results were obtained.

The video tutorial for this modeling and analysis is available on special request by sending an e-mail to ubani@structville.com. Also free contact us for special designs related to infrastructures in oil and gas facilities and tank farms.