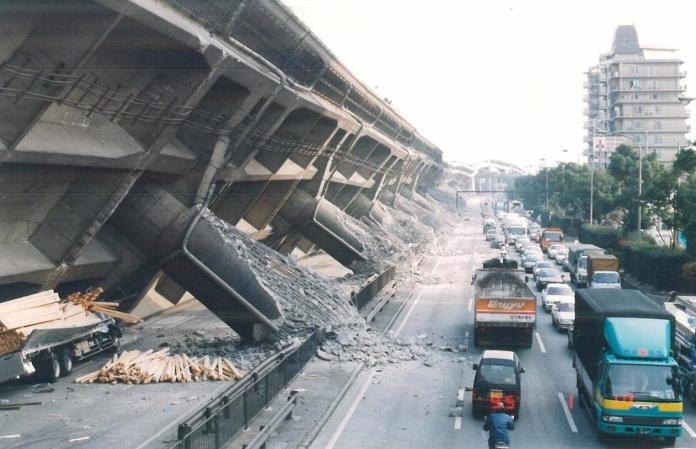 Researchers from the Department of Civil, Environmental, and Geomatic Engineering, ETH Zurich, Switzerland have offered new insights on the failure of Fukae Bridge during the Great Hanshin 1995 earthquake in Kobe, Japan. The magnitude 6.9 earthquake which left many damages behind its wake caused about $100 billion loss in properties, including the collapse of all 18 spans of the elevated Route No. 3 of Hanshin Expressway.

In the catastrophic seismic event, the deck of the bridge which was monolithically connected to 3.1m diameter piers failed and overturned dramatically, but the massive 17–pile groups supporting the piers survived the earthquake and are still in use, supporting the new bridge. The piles were founded in alluvium sand and gravel formation.

According to the authors, the lessons learned from the Kobe earthquake influenced substantially the seismic practices and codes not only in Japan but also worldwide. However, new insights have been offered on the failure of the bridge as the researchers carried out nonlinear finite element analysis of the bridge. The findings of the study were published in Elsevier -Soils and Foundations Journal.

Previous studies attributed the failure of the bridge deck to inadequate structural design regarding mainly the addition of a prematurely terminated third row of longitudinal reinforcement and insufficient shear capacity due to poor transverse reinforcement. Surprisingly, the failure did not occur at the bottom of the pier (location of maximum bending moment) but 2.5 m above the pilecap, where shear cracking initiated.

The authors, therefore, re-examined the collapse of the bridge by comparatively assessing the performance of the original foundation, which survived the earthquake and is still in use (for the fully replaced bridge), to that of alternative design concepts, considering nonlinear soil-foundation interaction.

To achieve this, they carried out the static and dynamic response of a single segment of the Fukae bridge employing the FE method using ABAQUS software. Six different foundation configurations were explored, starting with the actual very stiff 17–pile foundation with its large cap and a highly nonlinear rocking shallow footing alternative consisting only of the pilecap. The soil profile was modelled with hexahedral (8-node) elements, adopting a thoroughly validated kinematic hardening model, with a modified pressure-dependent Von Mises failure criterion and associated plastic flow rule.

The numerical simulation successfully reproduced the shear-dominated mode of failure at the region of longitudinal reinforcement cutoff. The analysis also confirmed that, despite being highly overdesigned, the pile group foundation experienced limited but non-negligible swaying and rocking during shaking, as a result of which the piles were subjected to tension and combined shear-moment loading.

The resulting stiffness reduction of the cracked under tension piles leads to load redistribution towards the stiffer compressed piles, preventing plastic hinging of the weaker piles (under tension). These findings were found to be consistent with the post-earthquake in-situ testing.

Some of the conclusions inspired from the study are as follows;

Disclaimer
The original aritcle cited above is an open access article under the CC BY-NC-ND license (http://creativecommons.org/licenses/by-nc-nd/4.0/) which permits sharing, copying, and redistribution of the material in any medium or format provided appropriate credit is given. It has been presented on www.structville.com in form of news article.