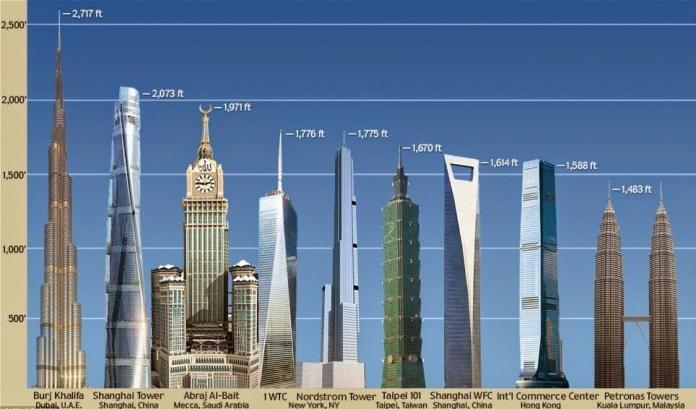 The idea of tall buildings has always been an exciting one to mankind. Towards the end of the 19th Century, the construction of tall buildings started in Chicago, due to new inventions such as the elevator and the telephone (Ali and Moon, 2007; Hallebrand and Jakobsson, 2016). Prior to the development of buildings for occupancy purposes, tall structures have been built in ancient times to satisfy one desire or another.

“They said to each other, “Come let us make bricks and bake them thoroughly”. They used brick instead of stone, and bitumen for mortar. Then they said, “Come let us build ourselves a city, with a tower that reaches to the heavens, so that we may make a name for ourselves and not be scattered over the face of the earth” – (Genesis 11:3 – 4)

In the quote above from the Bible, the quest for the construction of the Tower of Babel was driven by pride to reach towards the sky, and the quest to live together in one place. Other structures built in ancient times such as the Colossus of Rhodes, the Pyramids of Egypt (see Figure below), the Mayan temples of Mexico, and the Kutub Minar of India seems to have been determined by pride, ego, and competition (Bungale, 2010).

The Pyramids of Egypt were constructed around 2500 BC as tombs for Pharaohs and stood at about 140 m tall. These ancient tall structures were not used as human habitats but were monuments and places of worship (Khanna and Chand, 2019).

In the Middle Ages between 11th and 13th centuries, tall towers were used in the town of San Gimignano, Italy, for defence (see below), but were later used as residential buildings (Hoogendoorn, 2009; Czyńska, 2018). Even though most of the structures have collapsed, some of them have been preserved on the skylines of the city, with the tallest towers exceeding a height of about 50 m. For this reason, San Gimignano is called the medieval Manhattan (Czyńska, 2018).

Until the mid 19th century, gothic cathedrals were some of the tallest facilities in the world (Czyńska, 2018). In Europe, the construction of cathedrals led to the establishment of a quasi-religious status for the masons who were designing these amazing structures. For instance, the Cologne Cathedral was begun in 1248, and the masons used their knowledge to build a structure that must have installed awe in all who looked upon her (Gustaffson and Hehir, 2005).

Due to the limitations associated with construction of tall buildings using materials such as timber and bricks, builders began to look for alternative materials. The industrial revolution provided the materials such as wrought iron and steel. This also provided the social impetus for building higher as more workers from the countryside were required to work in the factories, so houses had to be provided for them (Gustaffson and Hehir, 2005).

Increased use of cast iron and later steel allowed the development of new architectural forms, such as long span roofs and bridges (Czyńska 2018). The result was the iron/steel frame structure which minimized the depth and width of the structural members at building perimeters (Ali and Moon, 2007).

The term high-rise began to be used to describe tall buildings and with the development in steel production and elevator, ever higher, buildings were being built. The first steel frame structure, Rand-McNally Building in Chicago was built in 1889 and was 10 storeys high (Smith and Coull, 1991).

The symbolic power of skyscrapers being recognized, a notable phenomenon occurred from the turn of the century. A skyscraper height race began, starting from the Park Row Building in New York, which had already reached 30 stories in 1899. This height race culminated with the completion of the 102-storey tall Empire State Building in 1931.

In terms of structural systems, most tall buildings in the early twentieth century employed steel rigid frames with wind bracing. Among them are the renowned Woolworth Building of 1913, Chrysler Building of 1930 and Empire State Building of 1931 all in New York (Ali, 2005). Their enormous heights at that time were accomplished not through notable technological evolution, but through excessive use of structural materials. Due to the absence of advanced structural analysis techniques, they were quite over-designed (Ali and Moon, 2007).

The early stages of American architecture lacked truly monumental structures. The monumental idea was gradually added to American architectural forms, reaching its apex with the construction of the Rockefeller Center in New York City (see below). The center represented a new concept of building a city within a city, containing a towering 60-storey structure surrounded by a number of smaller high-rise office buildings and recreational facilities.

This complex of skyscrapers has exercised increased influence since 1931, the year work on the Center was started. The building represents a departure in architectural thinking from a single-use, single-building concept to multi-use, multi-complex structures on a community scale.

Because of that practical example, American architectures responded more and more creatively to such demands and integration of city and the surrounding region. Another example of multi-building planning is the now nonexistent World Trade Center in New York City that consisted of twin 110-story towers and four smaller buildings grouped around a plaza (Bungale, 2010).

From 1950 to the mid-1960s, the International Style of architecture was embraced by prominent American architects and resulted in sleek boxlike glass and concrete or steel high-rises which integrated the concept of purity of design into the architecture of the structure. Notable examples are the Seagram Building (1950) and the Whitney Museum (1966), both in New York City, and the John Hancock Center (1968) in Chicago.

During the mid-1960s a reaction developed to the International Style that emphasized greater freedom of design. Figuratively speaking, the concept of glass box was beginning to shatter. It was no longer wrong to hide a structure behind a more aesthetic exterior.

The building and construction industry saw the advent of new forms of structural and other materials which allowed greater scope for aesthetic expression and innovation. Within the last two decades many major cities have had imaginative new shapes thrusting above their skylines using plan shapes that are other than prismatic (Bungale, 2010).

According to www.skyscrapercentre.com, the year 2020 yielded 106 completions of buildings 200 meters and taller, a 20 percent decline from 133 in 2019, and nearing a level last seen in 2014, when 105 such buildings were constructed. This is the second year in a row in which the completion figure declined. The tallest building to complete in 2020 was Central Park Tower in New York City, at 472 meters. This is the first time in five years in which the tallest completed building was not in China, and the first time since 2014, when One World Trade Center completed, that the tallest building of the year was in the United States. This is also the first year since 2014 in which there has not been at least one building taller than 500 meters completed.

Application of Wind Load to Shear Walls – A Manual Approach