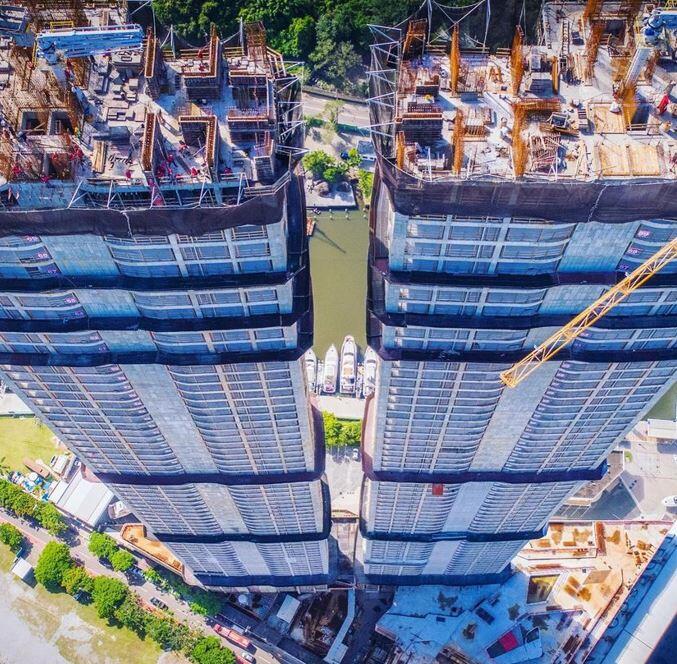 The rational conceptual design of earthquake-resistant RC buildings involves the design of a structural system in such a way that the lateral seismic actions (inertia forces) are transferred to the ground without excessive rotations of the building and in a ductile manner is one of the fundamental factors influencing the proper seismic behaviour of a building.

The requirements of the design code alone cannot do this. As a result, there are some general principles that, when followed in the planning and conceptual design of the building, can significantly improve the seismic resistance of the building.

According to Penelis and Penelis (2014), 29 of the 103 reinforced concrete buildings in Athens that were the most severely damaged or collapsed following the Parnitha earthquake (September 7th, 1999) were found to have failed mostly as a result of their inadequate configuration. This was mostly ascribed to the architect and structural engineer not working together early in the planning process, when a suitable compromise could have been struck.

According to Penelis and Penelis (2014), the guidelines that should govern a conceptual design against seismic hazard according to EN 1998-1:2004 (Eurocode 8) are:

Regularity of structure in plan and elevation

Buildings with regular plans and elevations, without re-entrant corners and discontinuities in the vertical stresses transferred to the ground, behave well during earthquakes. Irregularities in the building plan can lead to dangerous stress concentrations for the structure. In this instance, seismic joints may be used to partition the entire building with re-entrant corners into separate seismic compact portions, if necessary (Figure 2).

For sound seismic behaviour, uniformity in height and stiffness distribution is essential. Discontinuities in deck diaphragms or construction features with re-entrant corners, or discontinuities in load transfer to the foundation with walls or columns “planted on” beams and discontinued below, are warning signals for the behavior of the building in case of a large earthquake (Figure 2).

A special attention should be paid to this direction so that torsionally flexible or asymmetric structures, which can lead to failures of the corner columns and the walls at the perimeter, will be avoided. This is true even though the symmetrical arrangement of stiffness elements is not always possible due to architectural constraints.

Reinforced concrete structural walls should span the whole space between two adjacent R/C columns if there are any voids between them. This increases the structure’s stiffness, strength, and ductility (Figure 4).

Redundancy in the structure

To create a robust monolithic structure with a high level of redundancy, all structural components, including the foundation, should be strongly connected. The building’s perimeter high-stiffness cores (staircases and shafts) might readily break from the diaphragmatic system during an earthquake, causing the structure to react in an unanticipated way.

Avoid using short columns below the windows that may be caused by the presence of mezzanines, stiff masonry, or R/C parapets. If such arrangements cannot be avoided, consideration should be given to how they will affect the structure’s behaviour in terms of load effects, ductility, and shear capacity (Figure 5).

Despite being relatively attractive in terms of construction due to the low cost of formwork and the available space at story for the installation of building services ducts, flat slab systems without beams should be avoided as they are not entirely covered by EN 1998-1:2004. This does not imply that they cannot be utilized in conjunction with structural walls, cores, or frames that can withstand seismic events.

Avoid having large discontinuities in the elevation of the infill system, (such as open-ground stories as shown in Figure 6). This kind of stiffness discontinuity creates a soft storey mechanism that is extremely susceptible to collapsing.

Special precautions should be taken in the analysis and detailing of the structural walls and columns in the event that this type of structure cannot be avoided, as is the case in the majority of Mediterranean countries where the General Building Code requires an open storey at the ground level (Pilotis system).

The system of the floors and roof of a multistorey building constitutes the basic mechanism for transfer of inertial seismic forces from the slabs of the building where the masses are distributed to the vertical structural members (columns and structural walls) and thereby to the foundation. In addition, the slab system, particularly in cast-in-place R/C buildings, guarantees that each storey deck will behave as a hard disc in plane, or a horizontal diaphragm, while being flexible in the vertical direction.

The storey diaphragms contribute to the system’s increased redundancy in this way. It is clear that using R/C buildings cast in place makes it very simple to produce this 3D structure with high redundancy. There is obviously no chance of structural failure of the diaphragms in an R/C building with a compact form in plan.

But the diaphragmatic function could fail if the structural system has high-stiffness R/C cores at the edge of its perimeter, if there are re-entrant corners in the plan, or if there are very large floor openings. For these reasons, special attention must be paid to the analysis and design of the diaphragm itself (i.e., the analysis and design of the slab as a disc in-plane under the action of the inertial forces and the shear reactions of the vertical structural members on the disc).

Since seismic action can occur in any direction, the structural elements should be arranged in an orthogonal in-plan structural pattern to ensure similar resistance, stiffness, and ductility in both main directions (bi-directional function). In this situation, the structure must be able to withstand any excitation thanks to its two orthogonal components.

For capacity design purposes, structures must be made up of weak beams and strong columns, as this performs better during earthquakes. This concept ensures that plastic hinges will develop in the beams, and not the columns.

Offering a second line of defence

It is advised to add a second line of defence made up of ductile frames to the structural system in parallel with the shear walls. Therefore, it appears that the dual system (structural walls and ductile frames) is most suited to withstand seismic action. Independent of the findings of the investigation, ASCE 7-05 mandates that these frames must support 25% of the seismic actions. It should be emphasized that EN 1998-1:2004 does not prescribe such a requirement; rather, the structural system is upgraded insofar as its factory behaviour is concerned if the frames resist for more than 35% of the base shear.

The behaviour of the building in reaction to seismic events is significantly influenced by the foundation. It should be noted that reinforced concrete is virtually always used for the foundation, regardless of the material used for the superstructure.