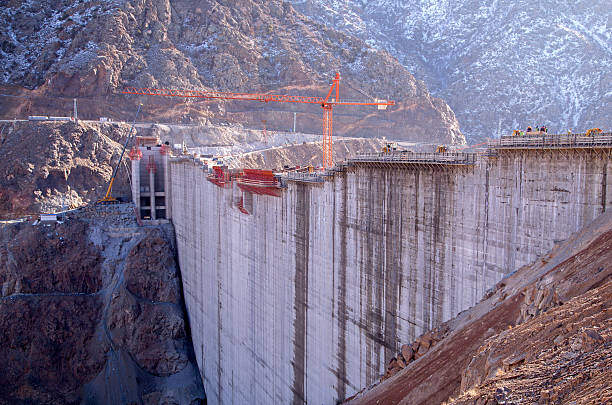 Recent research carried out at the Zhengzhou University of Technology, China has offered more insight into the improvement of interlayer mechanical properties of mass concrete. The study was published in the International Journal of Concrete Structures and Materials.

During the construction of mass concrete structures such as gravity dams, concrete is poured in layers. This can be as a result of a lapse in mixing and placement time, ease of construction, possible re-use of formworks, etc. As a result, the interlayer of the concrete (joint between the new and old concrete) becomes a potential weak point that is very susceptible to cracking. A structure’s durability and stability will be severely affected if interlayer bonding characteristics deteriorate. Hence, to maintain the structure’s safety, the interlayer bonding quality of mass concrete must be closely controlled.

The interlayer bonding characteristics of mass concrete are therefore heavily influenced by the interval time between the placement of new concrete on old concrete. Parameters such as compressive strength, interlayer splitting tensile strength, shear strength, and impermeability of concrete reduce with an increase in interval time according to many research works. Temperature, relative humidity, and wind speed are additional important parameters that influence the quality of mass concrete construction.

As a result, researchers (Song, Wang, and Lui, 2022), carried out research focusing on the effect of harsh environmental conditions on the quality of mass concrete construction, with emphasis on the interlayer properties and cracking. The concrete layer condition and interlayer splitting tensile strength were tested in harsh situations (high temperature, strong wind, steep temperature decline, and short-term heavy rainfall).

Secondly, the cracking risks of concrete in extreme weather were evaluated (coupling of high winds and dry heat, strong winds and cold waves, and short-term heavy rainfall). Finally, effective strategies to deal with construction risks during harsh weather conditions were proposed by the authors. The strategies considered were covering the concrete with an insulation quilt, artificial introduction of grooves on the old concrete, and addition of Polyvinyl alcohol (PVA) fibres.

From the study, it was observed that under harsh weather conditions, the interlayer mechanical characteristics of concrete reduced significantly (high temperature, strong wind, a steep descent in temperature, and short-time heavy rainfall).

For instance, under high temperatures (40 deg celsius), the water content of the cement mortar decreased gradually with time, while the penetration resistance increased continuously. However, when the concrete sample was covered with an insulation quilt, the water content was closer to the designed water content of 133 kg/m3. Generally, the results showed that in a high-temperature setting, covering an insulating quilt can reduce mortar water loss and lower penetration resistance of concrete specimens to a degree.

The study, therefore, showed that the interlayer bonding strength of concrete can be improved by covering it with an insulation quilt. The reason for this is that an insulation quilt can lessen the impact of the external environment on concrete, resulting in less water evaporation and a slower setting rate. Artificial grooves can also help to strengthen interlayer bonding. This is due to the artificial grooves increasing the roughness of the lower layer of concrete and improving the mutual embedding degree of the upper and lower layers.

Furthermore, under harsh weather conditions (coupling of strong winds and dry-heat, strong winds and cold waves, and short-time heavy rainfall), mass concrete has an increased risk of cracking. Concrete cracking can be efficiently prevented by using an insulation quilt (see Figure 2). It is mostly due to the insulation quilt’s ability to prevent water evaporation, resulting in a significant reduction in water loss shrinkage stress. Furthermore, the high water content fully hydrates the cement and enhances early tensile strength, which is beneficial to the anti-cracking properties of concrete at an early stage.

Finally, the addition of Polyvinyl alcohol (PVA) fibers to the concrete can help to prevent the formation and propagation of microcracks. This is due to the fact that PVA fibers can resist some of the tensile stress induced by moisture loss and shrinkage, as well as play a role in crack resistance and bridging. As a result, PVA fiber concrete can be put into important portions of concrete dams to improve the dam’s crack resistance.