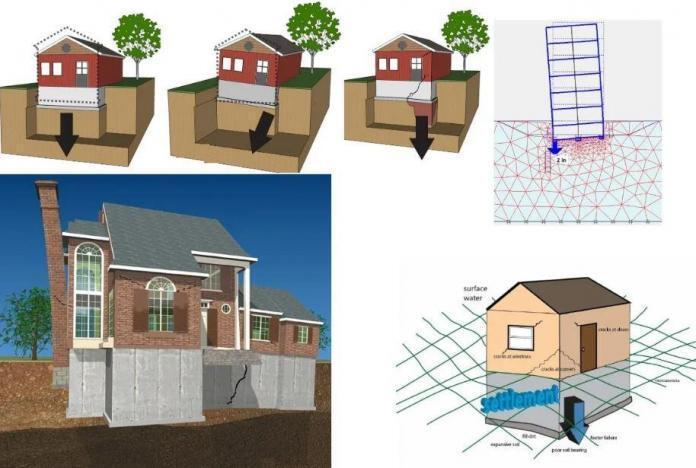 Foundation soils undergo settlement and deformation when loaded. When permissible stress methods are utilized in design, settlement due to foundation soil consolidation is usually the most essential consideration when calculating the serviceability limit state or analyzing acceptable bearing pressures. Even though ultimate limit state calculations or the application of an arbitrary safety factor to the calculated ultimate bearing capacity protects foundations from sinking due to soil shear failure, it is still necessary to investigate the likelihood of settlements before the allowable bearing pressures can be determined.

The causes of settlement of foundations, the implications of total and differential movements on the structure, techniques of calculating settlement, and foundation design to eliminate or minimize settlement will all be discussed in this article. Where (EN 1997-2:2007) EC 7 recommendations are used to compute the serviceability limit state, the partial factor γF for actions is unity for unfavorable loads and zero for favorable loads. When determining the characteristic deformation modulus or the coefficient of compressibility, the material factor γM is equal to one.

There are three parts to the settlement of a structural foundation.

The ‘immediate settlement‘ (Se) occurs as a result of elastic deformation of the soil without a change in water content during the application of the loading.
The ‘consolidation settlement‘ (Sc) occurs when the volume of the soil is reduced due to the ejection of some pore water from the soil.
‘Creep‘ or ‘secondary settlement‘ (Ss) occurs over a very long period of years after completing the extrusion of excess pore water. It is caused by the soil particles’ viscous resistance to compression adjustment.

The ‘immediate’ and ‘consolidation’ settlements are of a small magnitude in the case of foundations on medium-dense to thick sands and gravels. By the time the foundations are fully loaded, a large amount of the whole settlement has been accomplished. Similarly, a large share of foundation settlement on loose sands occurs as the load is applied, whereas settlement on compressible clays is a mixture of immediate and long-term movements. The latter is more likely to account for the majority of the movement and could take many years to complete.

EC 7 defines immediate settlement as “settlement without drainage for fully saturated soil due to shear deformation at constant volume.” EC 7 emphasizes the importance of considering foundation settlement due to reasons other than normal soil compression and consolidation. Some of them are groundwater level variations, effects of animals and vegetation, earthquakes, subsidence, etc.

Settlement of foundations is not only limited to very massive and heavy constructions. Under light loadings, considerable settlement can occur in soft and compressible silts and clays. According to Tomlinson (2001), settlement and cracking happened in two-storey homes built on soft silty clay in Scotland. The foundation loading was probably not more than 32 kN/m run of wall in the dwellings, which were made of precast concrete blocks. Differential settlement and cracking of the blocks of houses were so severe in less than three years after completion that a number of the dwellings had to be evacuated. A relative displacement of 100 mm along the wall was observed in one block.

The amount of the differential or relative settlement between one portion of a structure and another is more important to the superstructure’s stability than the magnitude of the total settlement. Only in relation to adjacent works is the latter significant. A flood wall to a flyer, for example, might be built to a crest level at a set height above the maximum flood level. Excessive wall settlement over a lengthy period of time could result in the wall overtopping during flood events. There is no influence on the superstructure if the entire foundation area of a structure settles to the same degree.

If there is relative movement between distinct elements of the foundation, however, stresses in the structure are created. If the differential movements are extreme, serious cracking and even collapse of the structure may ensue.