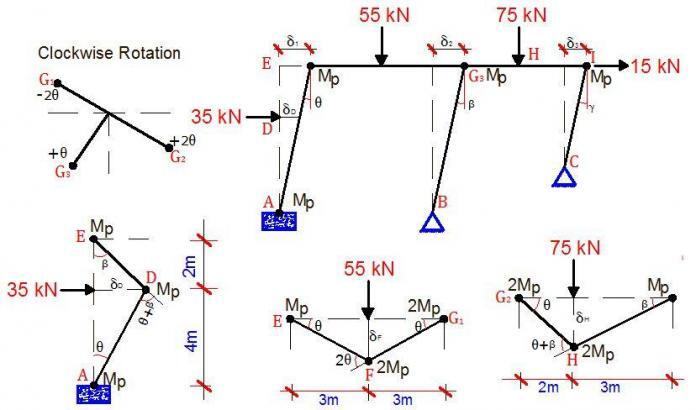 The fully plastic moment of a section (Mp) is the maximum moment of resistance of a fully yielded cross-section. The yielded zone due to bending where infinite rotation can take place at a constant plastic moment (Mp) is called a plastic hinge.

In order to find the fully plastic moment of a yielded section, we normally employ the force equilibrium equation by saying that the total force in tension and compression at that section are equal. In frames, the plastic moment can be easily obtained using the kinematic method (upper bound theorem).

When a system of loads is applied to an elastic body, it will deform and show some resistance to deformation, and such a body is called a structure. On the other hand, if no resistance is set up against deformation, such as a body is said to have formed a mechanism. This can occur in structures such as beams and frames.

It is important to realise that the number of independent mechanisms in a structure is related to the number of plastic hinge locations and the degree of redundancy of the system.

In beams, identification of critical spans in terms of Mp or load factor can be obtained using the static or kinematic method by considering simple beam mechanisms. But in framed structures, other types of mechanisms such as joint, sway, and gable mechanisms are also considered. Each of these mechanisms can occur independently, but it also possible for a critical collapse mechanism to develop by combination of the independent mechanisms.

The purpose of combining mechanisms is to eliminate hinges that exist in the independent mechanism leaving only the minimum number required in the resulting combination to induce collapse.

The steps in the plastic analysis of frame structures are as follows;

Solved Example
For the frame loaded as shown below, find the critical Mp value, and draw the collapse moment diagram. The loads are factored.

These independent mechanisms are listed below;
– 2 Beam mechanisms (span B – D and span D – G)
– 1 sway mechanism of the entire frame due to the horizontal load
– 1 joint mechanism

Analysis of the independent mechanisms

δ1 = 4 × θ = 4θ
Internal work done due to rotations at internal hinges at B, and D. No work is done at A, E, and G because they are all natural hinges.

The critical Mp is therefore = 111.167 kNm (This was achieved after other combinations were considered but this was found to be the highest).

Note that by virtue of the combination, internal hinges at B, D2, and D3 were eliminated. So the critical collapse mechanism is as given below;

Note that the implication of our analysis above is that points C, F and D1 are plastic hinges, with a full plastic moment of 111.167 kNm. While C and F are sagging, D1 is hogging. No other bending moment in the structure should exceed this value. Once a higher moment is discovered, it means that the critical collapse moment was not appropriately obtained.

Bending Moment
You can verify that having obtained the support reactions, the bending moment diagram can easily be plotted without strenuous calculations.

Thank you for visiting Structville today, and God bless you.