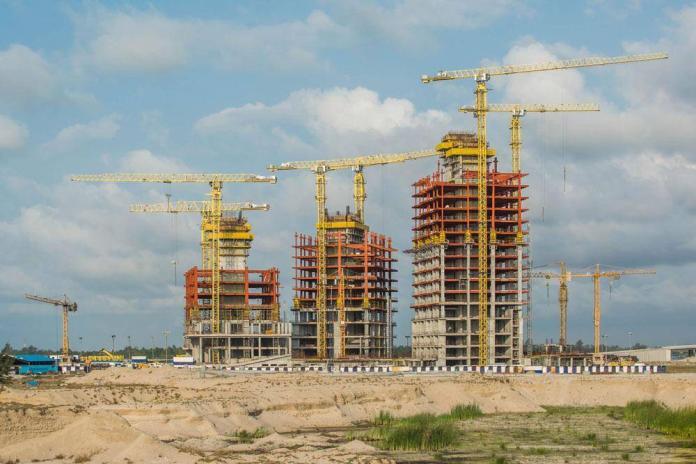 When a vertical compressive load is applied to a column, it shortens. Axial shortening takes place in all structures but when reaching great heights its effect has significant importance [1]. As the columns shortening are added together the overall shortening of a high-rise building becomes big enough to have real consequences. Shortening has to be taken into account by the structural engineer when the building is being erected since it will vary as more stories are added [2, 3].

Floor slabs can start to tilt because of differential column shortening which in turn affects the cladding, partitions, mechanical equipment, and more, a possible result is shown in Figure 1. Axial shortening of columns can also affect stress distribution in horizontal structural elements.

Depending on the material used for the construction, the magnitude of column shortening varies. Steel columns have more tendency to be affected by column axial shortening than reinforced concrete [5]. However, reinforced concrete does have length changes from creep and shrinkage making the two materials almost equal in total length change [4]. While shortening in steel columns have been attributed to elastic deformation only, it has been attributed to the summation of elastic strain caused by load application, shrinkage strain caused by drying, and creep strain induced by sustained stress over a long-term period in reinforced concrete.

Concrete columns and walls can potentially shorten at different rates within the same floor resulting in differential shortening [3, 6]. However, according to The Concrete Society (UK), column shortening is not significant in reinforced concrete buildings less than 10 – 15 storeys. At each storey height, a maximum shortening of 4 – 5 mm corresponding to deformation of about 1.4 mm/m is possible. Report suggests that it is difficult to reduce this shortening significantly. A better strategy is to minimise differential shortening by designing all columns to the same criteria.

In a research carried out by Ali [7] on steel buildings using SAP 2000 finite element analysis package, it was observed that the maximum axial shortening occurs in the top storey of the structure and almost zero magnitude at the bottom level. The increasing rate of axial deformation of steel column is quite high from ground level to the mid-floor levels and finally it becomes moderate from the mid floor level to the top floor. Interior columns experience higher axial shortening compared to side and corner columns which is responsible for the development of differential shortening in steel columns. This is because interior columns are more heavily loaded than exterior columns.

By designing the vertical structural members’ connection to deform without stressing the affected elements (cladding, partitions, etc.) column shortening can be contained. The problem of differential shortening between adjacent vertical elements still remains however and must be taken into consideration.

To compensate for columns shortening, a few different methods can be applied;

Calculation of exact values of axial shortening in reinforced concrete structures is not a straight forward task. It depends on a number of parameters such as the type of concrete, reinforcement ratio, and the rate and sequence of construction [8]. This information may not be available to the structural engineer at the design stage.

Samarakkody et al [9] developed a technique to evaluate the differential axial shortening in a high-rise building with composite steel and concrete columns. This technique incorporated the effects of construction sequence and concrete levelling, stress relaxation of concrete due to the presence of the steel tube, time-dependent material properties such as creep, and effects of belt and outrigger systems.

Correia and Lobo [10] developed a simplified method of assessing axial shortening in tall buildings using the construction sequence approach and obtained favourable results that are comparable with outputs from finite element packages.