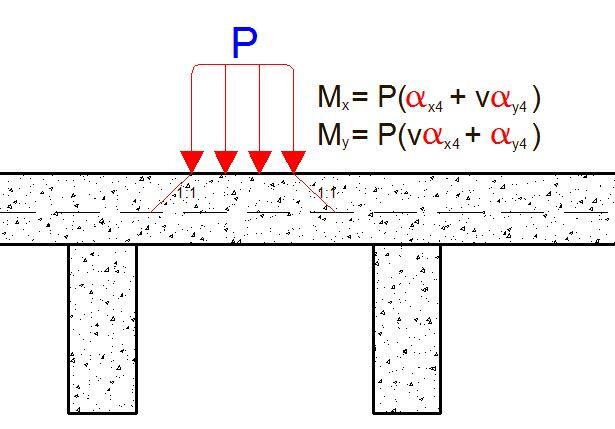 Moving traffic is the major live load (variable action) on bridge decks. In the design of bridges, it is very important to consider the global and local effects of moving traffic loads on the bridge. While global effects can be used to distribute traffic wheel load to the girders (in the case of beam and slab bridges), local verification is very important in the design of deck slabs especially for bending moment and shear. In this article, we are going to show how to distribute single wheel load to bridge deck slabs.

In BS 5400, single HA load (with a value of 100 kN) is normally used for all types of local effects verification. This load is normally assumed to act on a square contact area of 300 mm x 300 mm to give a pressure of 1.11 N/mm2 on the surface where it is acting. For 45 units of HB load, a single wheel load of 112.5 kN can be considered where necessary.

In EN 1991-2 (Eurocode specification for bridges), the local wheel load is represented by Load Model 2 (LM2) which consists of a single axle load with a magnitude of 400 kN (inclusive of the dynamic amplification factor). The single axle consists of two wheels (200 kN each) spaced at a distance of 2m (centre to centre). This load model is intended to be used for local verification only and should be considered alone on the longitudinal axis of thebridge. Unless otherwise specificied, each wheel is assummed to act on a rectangular area of 600 x 350 mm.

When the contact pressure has been obtained (together) with the dimensions of the contact area, the effects of the wheel load on the slab can be assessed using any suitable method. For manual analysis, Pigeaud’s curve can be used to obtain the design bending moments. For finite element analysis, the contact pressure can be applied as a patch load (partially distributed load) on a slab surface.

To show how this is done, let us consider a worked example.

Obtain the design moments in an interior panel of deck slab of the bridge system shown below due to the effect of a single HA wheel load on the bridge deck. The deck slab is overlain with a 75mm thick asphalt surfacing.

The dimensions of an interior panel of the bridge deck are as follows;

A further 1:1 load distribution from the surface of the concrete deck slab to the neutral axis will give a pressure of 256 kN/m2 acting on a square contact area of 625 x 625 mm.