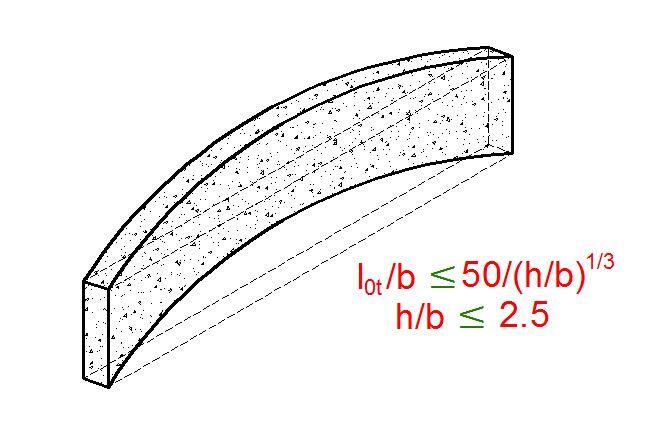 Just like columns, beams can undergo lateral buckling instability when it is slender. Slenderness in beams occurs when the width of the beam is too narrow compared to its span or depth. However, this is usually a rare occurence in construction, therefore, simple checks are usually sufficient to check that lateral buckling problem will not occur in beams.

where:
l0t is the distance between torsional restraints
h is the total depth of beam in central part of l0t
b is the width of compression flange

According to EC2, where buckling instability is to be considered in beams, a lateral deflection of l/300 should be assumed as a geometric imperfection in the verification of beams in unbraced conditions, with l = total length of the beam. In finished structures, bracing from connected members may be taken into account. Furthermore, torsion associated with lateral instability should be taken into account in the design of supporting structures.

No indication is given in EN 1992-1-1 as to how a further check should be formulated, should this be necessary. However, a more detailed analysis is given clause 6.7.3.3.4 of the CEB-FIP 1990 Model Code. The method given in the publication has similarities with the nominal curvature method (for analysis of slender columns) in that it postulates an ultimate deflected shape and then ensures that the critical section can withstand the resulting internal actions.

According to Beeby and Narayanan (2009), a problem which occasionally occurs in practice with slender beams is where, for example, an edge beam is designed with a thin parapet cast monolithically as sketched in Fig. 1. Such a beam would normally be designed ignoring the effect of the upstand parapet; however, rigorous interpretation of rules such as those in EN 1992-1-1 would imply that such a member cannot be used because of the slenderness of the parapet. It must, in such circumstances be satisfactory to state that if the beam is adequately safe without the parapet, then the addition of the parapet cannot make it less safe.