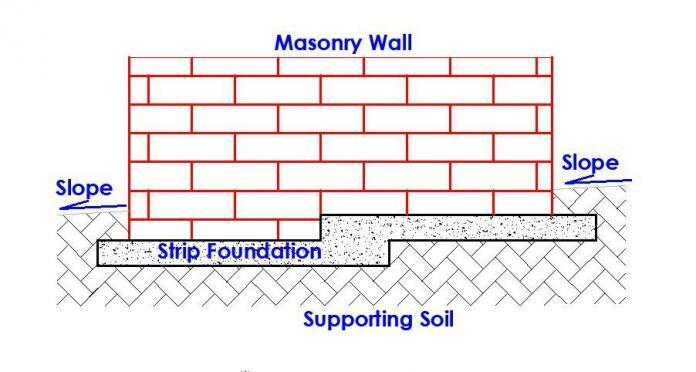 Strip foundations do not have to be at the same level throughout the building when it is built on sloping terrain. The foundation can be stepped as shown in Figure 1. For the strip foundation of duplexes and commercial buildings, it also very common to step down the foundations, even though sometimes, it is not properly done. Therefore stepped foundation is fairly common in building construction.

Strip foundations can also be stepped to follow any undulations in the bearing stratum if they are laid below a surface layer of infill or poor soil on to the underlying bearing stratum. Figure 2 shows the BS 8103 standards for a regular strip foundation. Unless extra precautions are taken, the step should not be higher than the thickness of the foundation. Foundation stepped on elevation should overlap by twice the height of the step, the thickness of the foundation, or 300 mm whichever is greater.

Heights of steps in deep trench fill foundations (Figure 3), require special consideration and it might be advisable to introduce reinforcing bars to prevent cracking at the steps. For trench fill foundation, the overlap should be twice the height of the step or 1m, whichever is greater. Steps should not be thicker than the thickness of the foundation.

In a lightly loaded strip foundation, the thickness of concrete is typically equal to the projection from the face of the wall or footing, with a minimum thickness of 150 mm. This minimum is required to provide the rigidity that allows the foundations to bridge over loose spots in the soil and resist longitudinal stresses caused by thermal expansion and contraction as well as moisture movement in the footing walls. Swelling pressures on clay soils can be extremely high.