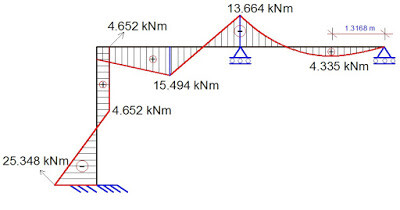 Structural analysis is an important aspect of any structural design. It is simply the process of determining the effect of direct and indirect actions on structures. The effects of actions usually obtained from structural analysis are the displacements, bending moment, shear forces, axial forces, torsion, etc. Linear first-order analysis of statically indeterminate frames can be carried out using the force method, displacement methods, or other approximate solutions.

It is a well-known fact that there are two basic methods of analysing statically indeterminate structures which are;

By implication, both analysis methods always involve reducing the structure to a basic system (a determinate system). In the force method, the basic system involves the removal of redundant forces, while the stiffness method involves restraining the joints of the structure against displacement.

In the solved example downloadable from this post, the frame shown above has been analysed for bending moment due to the externally applied load using force method and displacement method. In the force method, the graphical method was employed (Vereschagin’s rule of diagram multiplication).

To get yourself familiar with Vereschagin’s rule, click HERE
To see an elaborate example of its application, click HERE;

Highlights of the solved problem
NOTE: Diagrams are not to scale. Read assigned values

Step 2: Reduce the structure to a basic/primary system by removing redundant supports and replace them with unit loads (X1 and X2)

Step 3: Analyse the primary system for the various unit loads, treating each as a separate load case.

Step 4: Analyse the primary system when subjected to the external load, and plot the internal forces diagram.

Step 5: Compute the influence coefficients by diagram multiplication
A few examples of how the bending moment diagrams from above are combined are shown in the figures below.

δ11 – Deformation at point 1 due to unit load at point 1. In this case, the bending moment diagram from case 1 is combining with itself;

δ22 – Deformation at point 2 due to unit load at point 2. Here, case 2 bending moment diagram is combining with itself;

Step 6: Formulate the appropriate cannonical equation, and solve for the reactive forces X1 and X2

Step 2: Reduce the structure to the primary system by restraining all unknown displacements. Apply unit displacements at the joints so restrained (Z1, Z2, Z3 and Z4)

Step 3: Analyse the structure for the various unit displacements, treating each as a separate load case.

Step 5: Compute the free terms of the canonical equation for each node from the fixed end moments and reactive forces due to the externally applied load.

Step 6: Formulate the appropriate canonical equation, and solve for the real nodal displacements
Solve for Z1, Z2, Z3, and Z4