1.0 Introduction
A pozzolan is a siliceous or aluminosiliceous material that, in finely divided form and in the presence of moisture, chemically reacts with the calcium hydroxide released by the hydration of portland cement to form calcium silicate hydrate and other cementitious compounds. Pozzolans are generally categorized as supplementary cementitious materials or mineral admixtures (Kosmatka et al, 2003). On their own, pozzolans possess little or no cementitious value, but when ground in fine form and in the presence of water will react with calcium hydroxide and develop cementitious properties.

Rice husk ash (RHA) has been used as a highly reactive pozzolanic material to improve the microstructure of the interfacial transition zone (ITZ) between the cement paste and the aggregate in high-performance concrete (Biu et al, 2005). Rice husk ash has also been reported to improve the properties of concrete or cement paste due to the pozzolanic reaction and its role as a micro-filler. It is often thought that the first function (pozzolanic reaction) is most important. The partial replacement of cement by rice husk ash in cement paste and mortar would provide micro-structure improvement, pore filling effect and better packing characteristics of the mixer (Kondraivendhan, 2012).

One of the major highlights in the use RHA as cementitious material is based on environmental considerations. Rice milling industry generates a lot of rice husk during milling of paddy which comes from the fields. Rice husk ash (RHA) is about 25% by weight of rice husk when burnt in boilers.  It is estimated that about 70 million tones of RHA is produced annually worldwide. This RHA is a great environment threat causing damage to the land and the surrounding area in which it is dumped (http://www.ricehuskash.com/product.htm).
Studies have shown that RHA resulting from the burning of rice husks at control temperatures have physical and chemical properties that meet ASTM (American Society for Testing and Materials) Standard C 618-94a. At burning temperatures of 550 °C – 800 °C, amorphous silica is formed, but at higher temperatures crystalline silica is produced (Reddy and Alvarez, 2006). Amorphous silica is best for the production of concrete.  Rice husk contains about 75 % organic volatile matter and the balance 25% of the weight of this husk is converted into ash during the firing process, and is known as rice husk ash (RHA). This RHA in turn contains around 85% – 90% amorphous silica. So for every 1000 kgs of paddy milled , about 220 kgs (22 %) of husk is produced, and when this husk is burnt in the boilers, about 55 kgs (25 %) of RHA is generated (http://www.ricehuskash.com/product.htm).

2.0 Chemical Properties of RHA
According to Chandrasekhar et al (2003), the chemical composition of rice husk is found to vary from one sample to another due to the differences in the type of paddy, crop year, climate and geographical conditions. Here are samples of variation in chemical properties of RHA from various research works;
According to Habeeb and Mamoud (2010) (Malaysia); 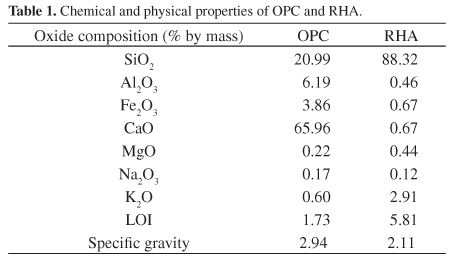 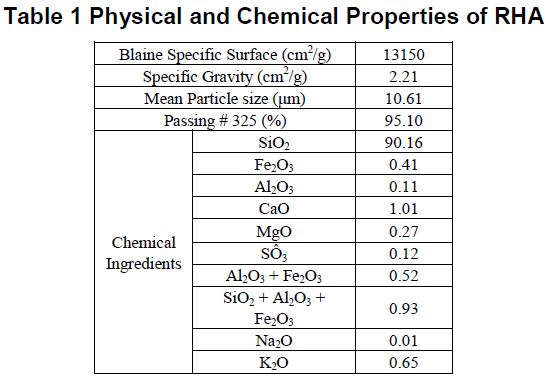 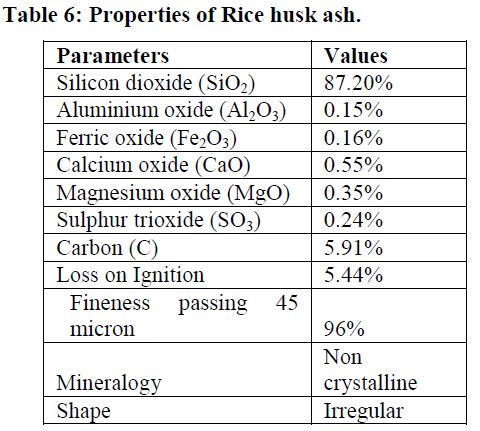 Thus with all these results, you can verify that the chemical properties of RHA varies, so it is very important that before any RHA sample is used, chemical analysis should be carried out.
3.0 Effect of RHA on Compressive Strength of Concrete
In this section, we are going to present some research works that have been carried out by various scholars on RHA.
Emmanuel and Akaangee (2015) [Nigeria] collected 4.7kg of RH and weighed it using Sartorius-2 weighing scale. 1.085kg of rice hush ash was obtained after an open burning of the rice husk in a local furnace for two hours at a temperature range of 600°C to 700°C. The finely divided ash was left to cool for 24 hours inside the furnace. It was then grounded forfour minutes to obtain a finer particle size with the aid of a disc-mill, sieved manually using a 45 micro meter sieve to ensure proper fineness of the ash. From their result, the compressive strength of the concrete were as follows;

From their result,  compressive strength of cubes increases with age of curing and decreases as the percentage of rice husk ash content increases. The major setback in their research work was that 40mm x 40mm x 160mm moulds were used to prepare the concrete samples, and the target design strength was not specified, including the mix ratio adopted. But the major highlight of the research work was that maximum compressive strength was obtained at 15% replacement of OPC with RHA.

Grade 53 ordinary portland cement was used for this research, and water to cement ratio of 0.43 to 0.35 was used. The mould size employed was 150mm x 150mm x 150mm, and 60 specimens of this was prepared. The result of the compressive strength is given below;

From his research, the maximum compressive strength was obtained at 10% replacement. The result was also the same considering M60 grade of concrete.
Oyewumi et al (2014) [Nigeria] investigated the effect of RHA in concrete, and the proportioning of the materials is as shown below;

The result of the test is as given below;

Bolla et al (2015) [India] carried out a research on the effect of  partial replacement of cement with RHA on concrete. The cement has been replaced by rice husk ash accordingly in the range of 0%, 5%, 10%, 15%, and 20% by weight of cement for mix. Concrete mixtures were produced, tested and compared in terms of compressive strengths with the conventional concrete. These tests were carried out to evaluate the mechanical properties for the test results of 7, 28, 60 days for compressive strengths. The cement used for this test was grade 53, and cube sizes of 150mm x 150mm x 150mm were used.
Results of the test are given below; 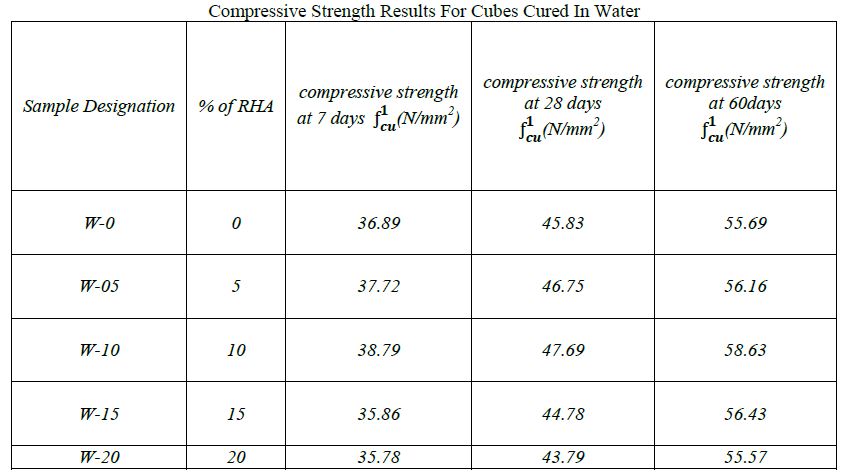 From this result, the maximum compressive strength was attained at 10% replacement. The author reported that the RHA has a minimum silicon dioxide of 90%.
Tsado et al (2014) [Nigeria] carried out the comparative analysis of properties of some artificial pozzolana in concrete production, which included rice husk ash, corn cub ash, and sheanut shell ash. However, we will focus on the result from RHA. A little consideration from his research showed that the silicon dioxide content of the RHA was too low at 48.44% (Bida, Niger state Nigeria). The chemical analysis result of the samples is given below; 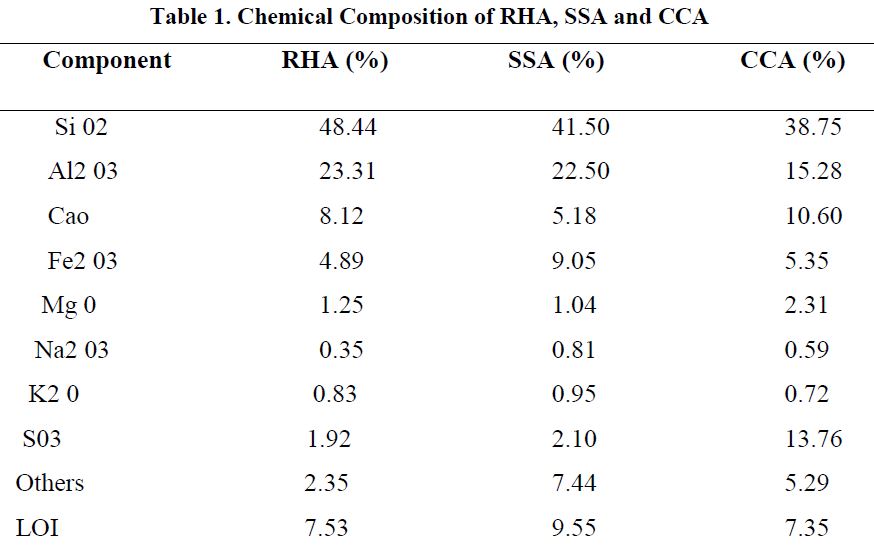 The sample was prepared as 1:2:4 mix ratio, with a water to cement ratio of 0.6. 60 number of 150mm cubes were prepared, and the result of the test is given below; 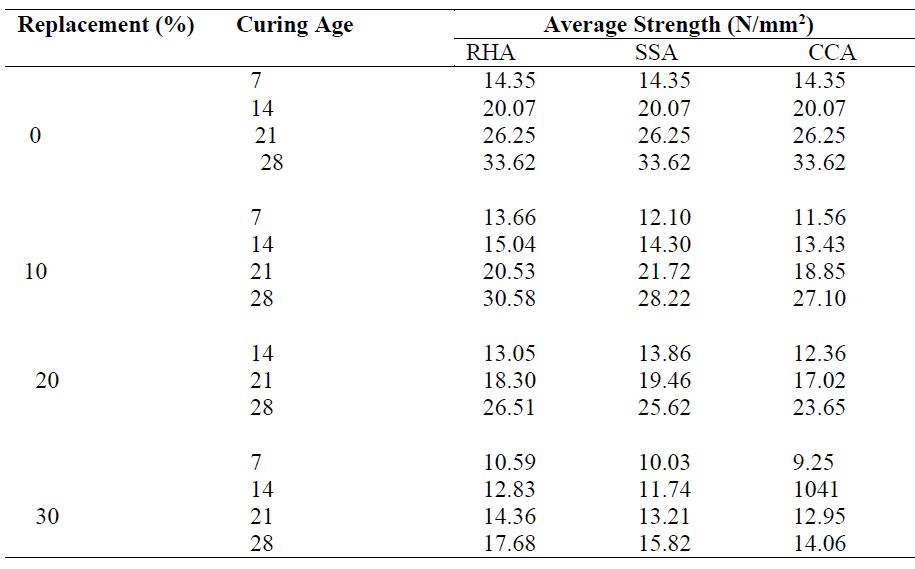 Zareei et al (2017) [Iran] evaluated the durability and mechanical properties of rice husk ash as a partial replacement of cement in high strength concrete containing micro silica. The research presented resulted from various ratios of rice husk ash (RHA) on concrete indicators through 5 mixture plans with proportions of 5, 10, 15, 20 and 25% RHA by weight of cement in addition to 10% micro-silica (MS). This was compared with a reference mixture with 100% Portland cement. Tests results indicated the positive relationship between 15% replacement of RHA with increase in compressive strengths by about 20%. The optimum level of strength and durability properties generally gain with addition up to 20%, beyond that is associated with slight decrease in strength parameters by about 4.5%.
The chemical properties of the RHA used for the research is given below; 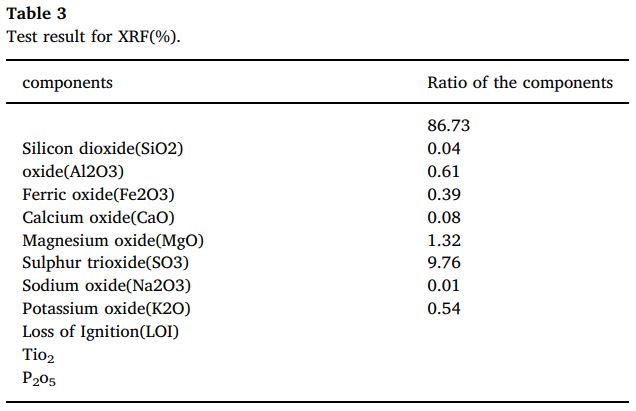 In the batching, 8 cubes of 100mm x 100mm x 100mm samples were prepared, and a water to cement ratio of 0.4 was maintained throughout the test. The mix design of the test is given below;

The compressive strength of the entire batch is given below;

From the result, you can see that the maximum compressive strength was obtained at 20% replacement. Note that this research is aimed at high strength concrete, and Micro-Silica (MS) has been added.
Abalaka and Okoli (2013) [Nigeria] carried out test on strength development and durability of concrete containing pre-soaked rice husk ash. The aim of the research was to determine the optimum ordinary Portland cement (OPC) replacement with RHA resulting from the reactivity of pre-soaked RHA and the effects of presoaked RHA on durability properties (coefficient of water absorption and sorptivity) of concrete at the age of 90 days.
The mix proportion of the experiment is as given below;

The characteristic chemical composition of the RHA is given below;

100mm x 100mm x 100mm steel moulds were used for the experiment, and the resulting compressive strength of the mixture is as given below;

From the above test, the maximum compressive strength was achieved at 15% replacement. Note that FOSROC’s Conplast P505 (plasticizer conforrming to BS EN 934) was used to improve workability.

Ujene and Achuenu (2013) [Nigeria] carried out research to determine the compressive strength of concrete prepared with various agricultural wastes across Nigeria. To ensure uniformity of the data, the research is restricted to percentage replacement of 10%, 20% and 30% of cement with local binders using design strengths of 25 Mpa and 30 Mpa at 7, 14 and 28 days curing.
The designation of the alternative binders used in the research is given below;

The results of the findings are as follows;

Use of Lightweight Concrete in RC Design