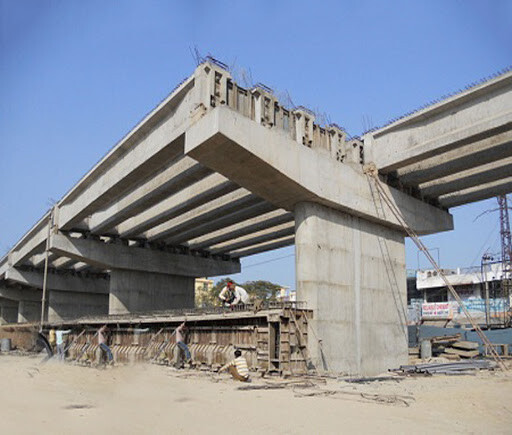 Courbon’s theory is one of the popular classical methods of analysing slab and beam girder (T-beam) bridges. However, the results obtained from the method are usually very uneconomical when compared with other numerical methods like grillage analogy. It is one of the easiest manual calculation methods that can be adopted in evaluating the effect of traffic actions in bridge deck girders.

Let us consider the application of Courbon’s theory on the bridge deck arrangement shown above. When the beams are equally spaced and geometrically equal, the reaction factor for each beam is given by equation (1);

If we set P = 1.0, we can obtain the influence line pertaining to each beam.

A T-beam bridge deck with 3 girders is loaded according to Load Model 1 of EN 1991-2 as shown below. Using Courbon’s method, calculate the bending moment and shear force on girder number 1.

Setting P= 1.0 at girder number 1 as shown below, we can obtain the influence diagram using equation (1).

The influence diagram for the girder is therefore given below. The values at the two cantilever portions of the bridge deck can be obtained using similar triangles.

Let us assume that we are dealing with 20m span bridge, the preliminary effect of the vehicle action on the girder can be taken as given below;