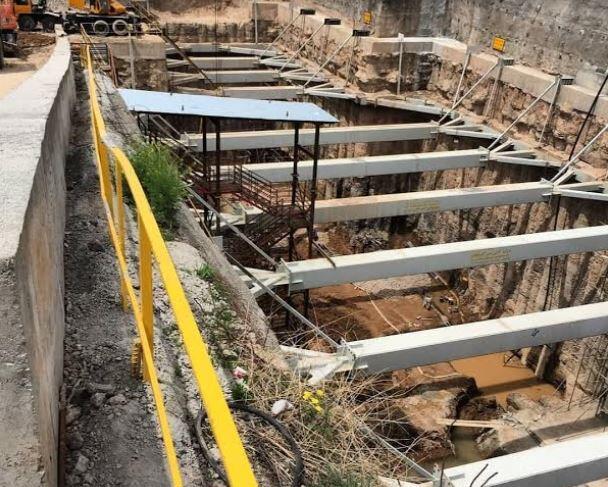 In the construction of any substructure below the ground surface, excavations must be made to the recommended depth before the construction can begin. In the circumstances where deep vertical cuts (say about 3m) are to be made in a soil, provision must be made for the support of the soil to stop it from caving in or collapsing. The design of braced cuts involves the evaluation of the stresses in the members (bracings) used for supporting the cut, and provision of adequate members sizes or sections to avoid structural failure. These are usually classified as temporary works in construction.

Most shallow foundations in cohesive-frictional soils may not need side supports to keep the cut stable. Furthermore, when there is enough space, the sides of the excavation may be sloped, thereby eliminating the need for bracings or support. However, when a vertical excavation exceeds 3m depth, the most common practice is to drive vertical timber planks called sheeting along the sides of the excavation. Horizontal beams called wales are used to hold the sheeting in place, while struts running from side to side of the excavation is used to hold the wales in place.

For deeper cuts of about 5-6m, the use of timber sheeting may become uneconomical and steel sheet pile walls may be used (see figure below). Sheet piles are convenient to use because of their high resistance to stresses. On the other hand, they are relatively lightweight and reuseable when compared with timber.

To design braced excavations (that is to select the wales, struts, sheet piles etc), the engineer must estimate the lateral pressure that the braced cut will be subjected to. The lateral earth pressure distribution of braced cuts is different from that of conventional retaining walls. This is because the deformation of braced cut walls gradually increases with the depth of the excavation. The deformation is influenced by factors such as type of soil, type of equipment used, depth of excavation, and workmanship.

The lateral pressure is the larger of;

Where c is the undrained cohesion of the soil.

When using the pressure envelops in design, it is very important to keep the following in mind;

Design of the various components of a braced cut

Struts
Struts in braced cuts behave like horizontal columns. Hence, the load-carrying capacity depends on the slenderness ratio and flexural buckling capacity. During construction, it is recommended that struts should have a minimum vertical spacing of 3m. In clay soils, the depth of the first strut below the ground surface should be less than the depth of the tensile crack.

To determine the load in the strut, the following procedure can be used;

Sheet Piles
The following steps may be taken in the design of a sheet pile wall;

Wales
Wales may be treated as continuous horizontal members if they are properly spliced. Conservatively, they can be assumed to be pinned at the struts.

A long trench is excavated in a medium dense sand for the basement of a highrise building. The excavation is supported with sheet pile walls held in place by struts and wales as shown in the figure below. The struts are spaced 4m c/c in plan.

The shear force diagrams of the different sections are shown below;

When the loads are factored, the struts can be designed as axially loaded steel columns.

(c) Bending moment on the sheet pile walls
By looking at the shear force diagram, we can confirm that the maximum moment will occur at the cantilever regions and at the points of contraflexure for shear.

For section A-B, the point of contraflexure of the shear force diagram can be obtained using similar triangle;

The maximum moment for the section is 37.25 kNm/m and should be used for the design of the sheet pile wall when factored.

(d) Design moment of the wales
We can use the maximum strut load to design the wale.

Special considerations should be given to braced cuts in layered soils (kindly refer to standard geotechnical engineering textbooks). Furthermore, heave at the bottom of braced cuts in clay soils should also be considered where applicable.