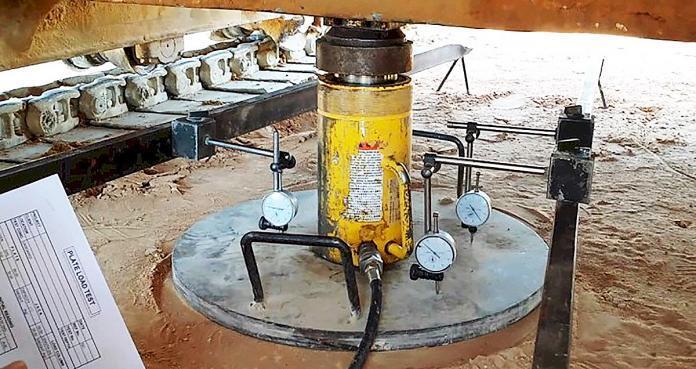 The plate load test or ‘plate bearing test’ is one of the quickest ways of determining the bearing capacity and settlement characteristics of soils on site. This test is essentially useful especially for the design of shallow foundations such as pad footings.

It basically consists of loading a rigid plate at the foundation level and increasing the load in arbitrary increments. The settlement corresponding to each load increment is recorded using at least two or three dial gauges with a least count of 0.02 mm. The gauges should be placed separately at 120° or 90° respectively. The test load is gradually increased till the plate starts to settle at a rapid rate. The load-settlement curve is plotted from which the settlement and bearing capacity of the soil can be determined.

The apparatus required for carrying out a plate load test are;

The procedure for carrying out plate load test according to BS 1377 part 9 are as follows;

Curve I is typical of dense sand or gravel or stiff clay, wherein general shear failure occurs. The point corresponding to failure is obtained by extrapolating backward (as shown in the figure), as a pronounced departure from the straight-line relationship that applies to the initial stages of loading is observed. (This coincides approximately with the point up to which the range of proportionality extends).

Curve II is typical of loose sand or soft clay, wherein local shear failure occurs. Continuous steepening of the curve is observed and it is rather difficult to pinpoint failure; however, the point where the curve becomes suddenly steep is located and treated as that corresponding to failure.

Curve III is typical of many c – φ soils which exhibit characteristics intermediate between the above two. Here also the failure point is not easy to locate and the same criterion as in the case of Curve II is applied.

Thus, it is seen that, except in a few cases, arbitrary location of failure point becomes inevitable in the interpretation of load test results.

However, it is important to know that the plate load test has some drawbacks such as size effects, and does not take into account the possibility of consolidation settlement, especially in cohesive soils. Furthermore, it is reported that the load test results reflect the characteristics of the soil located only within a depth of about twice the width of the plate.

In this article we are going to show how to make computations from plate load test.

Example
A plate load test was conducted on a uniform deposit of sand at a depth of 1.5m below the natural ground level and the following data were obtained;

Assuming the factor of safety against shear failure as 3.0 and the maximum permissible settlement as 25 mm, determine the allowable bearing pressure.

(iii) Design of footing for a load of 600 kN, if the water table is at a great depth.

Solution
(1) The pressure-settlement curve is shown in the figure below. The failure point is obtained as the point corresponding to the intersection of the initial and final tangents. In this case, the failure pressure is 335 kN/m2.

For a square footing of width (B) and depth (Df) 1.5m founded on sand;

For this particular case study, settlement will govern the design.